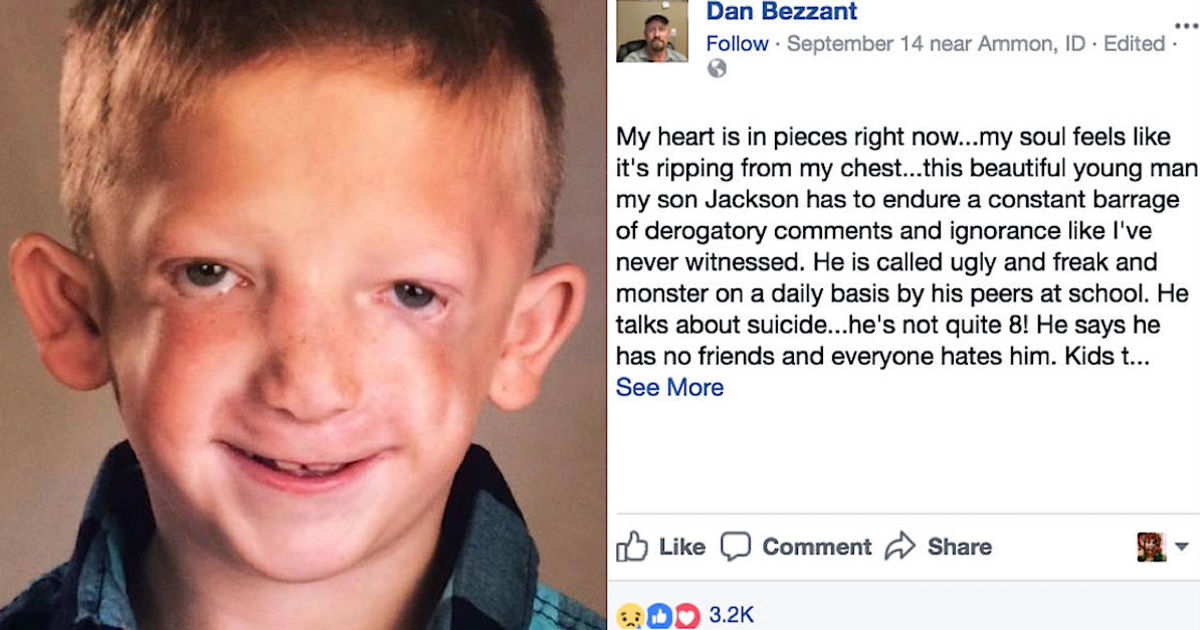 How long will we tolerate bullying when even little kids are contemplating suicide?

Seven-year-old Jackson Bezzant has been bullied and teased almost as long as he’s been alive.

He can’t even eat breakfast at school without older boys harassing him and calling him a “freak” or “monster.”

Thank goodness, a teacher’s aide told Jackson’s mom about what happened, though the bullying should have stopped a long time ago.

When Jackson’s dad, Dan, heard what happened, he couldn’t hold back the tears.

His beloved son was born with Treacher Collins syndrome, a rare disease that has affected the development of his facial bones and also left him almost deaf.

Jackson’s dad, Dan, has witnessed people of all ages say horrible things in his son’s presence.

“One time, a woman walked past us and we could hear her say, ‘Did you see that little boy’s face?'” Dan told WREB News.

After hearing what happened to Jackson at school, Dan decided to act.

This is Jackson Bezzant and he’s about to turn eight.

Jackson was born with Treacher Collins syndrome, a condition that affects the development of his facial bones. His hearing and vision are also greatly impaired and he wears a hearing aid.

As you can probably guess, this little guy has gone through a lot in his young life.

Recently, Jackson’s father, Dan, heard something that made him weep.

One morning at school, Jackson was in the cafeteria, when several older boys started bullying him. They called him a “monster” and many other horrible names.

Dan decided that enough was enough. He went on Facebook and wrote a powerful post about the incident:

“My heart is in pieces right now…my soul feels like it’s ripping from my chest…this beautiful young man my son Jackson has to endure a constant barrage of derogatory comments and ignorance like I’ve never witnessed. He is called ugly and freak and monster on a daily basis by his peers at school. He talks about suicide…he’s not quite 8! He says he has no friends and everyone hates him. Kids throw rocks at him and push him shouting these horrific words…please please take a minute and imagine if this were your child. Take a minute to educate your children about special needs. Talk to them about compassion and love for our fellow man. His condition is called Treacher Collins. Maybe even look it up. He’s endured horrific surgery and has several more in the coming years. Anyway…I could go on…but please educate your children. Please…share this. This shouldn’t be happening…to anyone.”

Now, kids at Jackson’s school are approaching him and his family. They want to be friends with Jackson and protect him from his bullies.

Dan points out that he doesn’t want to blame Jackson’s teacher or his school. Instead, he says that the responsibility lies with parents, who should raise their children to respect others with kindness and acceptance.

“I want parents to see my post and feel my heartbreak. This could be any kid anywhere,” Dan says. “Please educate your children and let them know that bullying is not OK.”

Dan says that his Facebook post also helped him and Jackson get in touch with two other families in the area who have children with Treacher Collins syndrome. Now, they’re planning to meet up for a play date!

We’re so happy that so many people are standing behind Jackson now!

He deserves so much more than to be bullied and teased.

Please share Dan’s powerful words if you also think we need to do even better to stop bullying!