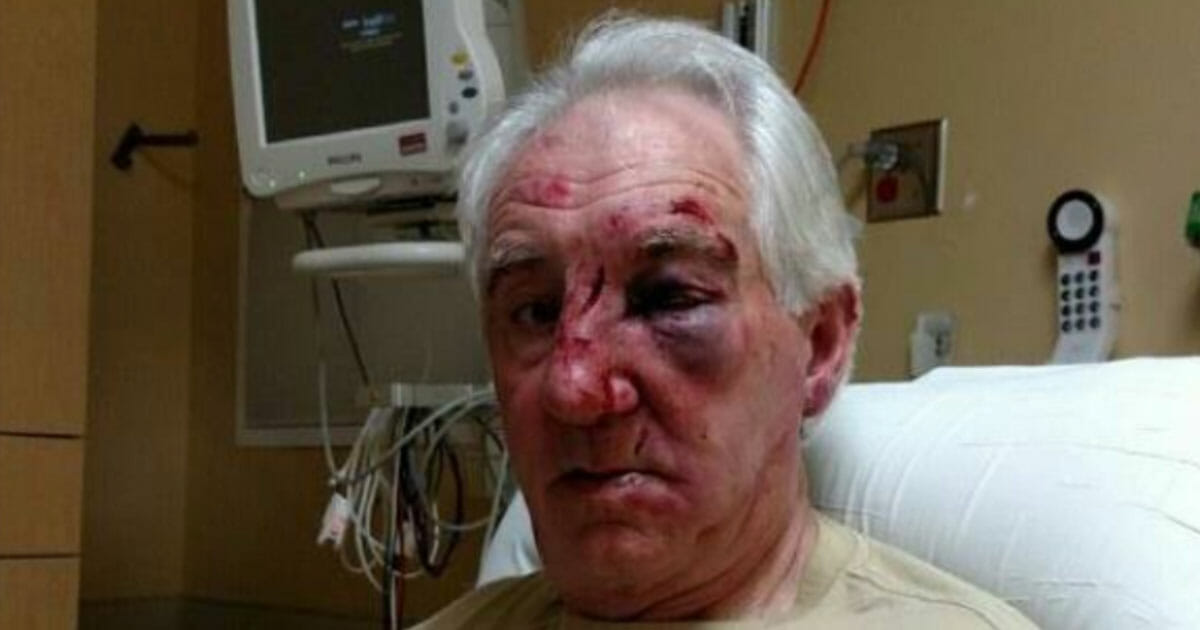 To imagine our parents – or indeed any elder relatives – being attacked and hurt is something that’s too much for bear for most of us.

And yet it was the nightmare Amy Jane Johnson was forced to endure when her father-in-law was brutally assaulted in front of his own home in the East Bethel/Ham Lake area, Minnesota, on March 2, this year.

In an apparent act of road rage, Amy’s partner’s dad was set upon after being followed home, and beaten so badly he suffered multiple broken bones and required countless stitches.

Amy Jane Johnson was dismayed and disgusted to see what a young attacker had done to her father-in-law.

According to reports, Amy Jane Johnson’s father-in-law, who has not been identified, was tailed to his address after crossing wires with another driver.

He became the victim of a “road rage incident” in which Amy says he was followed home and beaten so badly that he suffered multiple broken bones and required countless stitches.

The attack that occurred in East Bethel, Minnesota, in which the victim sustained multiple facial fractures and several lacerations requiring many stitches, took place on a Friday evening one year ago.

The perpetrator is said to have beaten Amy’s father-in-law for over a full minute – a significantly long time for an assault – before asking, “Have you had enough?”

Following the violent encounter, the victim was able to get to his feet, make his way inside the house and call for help.

According to Amy, her father-in-law had no clue he’d been followed home.

Now, Amy’s issuing an urgent plea for people to help locate and bring to justice the man who attacked her father-in-law.

She took to Facebook to plea for help. “LOOK AT THIS PHOTO,” she wrote, along with the image of her father-in-law’s injuries.

As she appealed to social media users she begged them to help find the “low-life” who did this to her father-in-law.

“This is a 71-year-old man who did nothing…literally NOTHING to warrant this. Our family is heartbroken and helpless and those are the 2 worst feelings to have,” she added.

The family is thankful the victim is still alive after such a heinous assault. A few skull fractures could very well leave someone dead

After the shocking incident, Minnesota investigators said they were looking for a dangerously violent man.

Fox News reported, “The suspect is described as a white man, approximately 35 years old, 6 feet or taller, short hair, possibly in a ‘buzzed’ style. He was said to be wearing a longer length leather coat or jacket. He likely has injuries to his hands… The suspect was driving a newer dark silver or gray vehicle with LED headlights and a line of LED lights just below the headlights, possibly a Mustang or similar vehicle… the vehicle had dark tinted windows.”

Police said they believe “there are people who may have information about this attack” and encouraged them to call the sheriff’s office at 763-427-1212 or leave an anonymous tip on its website.

”Anyone who would brutally attack a senior citizen in this manner is a clear danger to the public,” the Anoka County Sheriff’s Office said in a Facebook post that also included a photo of the badly injured victim.

Sadly, it seems that the police have not been successful in finding the perpetrator.

Despite massive help from society, social media and investigators, the man goes free. They still never caught this monster that did this, according to Amy Jane Johnson.

This act of violence towards a senior citizen is completely unforgivable!

But hopefully, if enough people see this, the suspect will eventually be identified, found, and held responsible before they can do this again.

I think this family is right. Someone somewhere knows something. It obviously doesn’t take much to set them off, so it’s important that they are caught before they strike again.

The next person they set upon might not fare so well. A few skull fractures could very well leave someone dead.

Save a life, spread this until this monster is found.