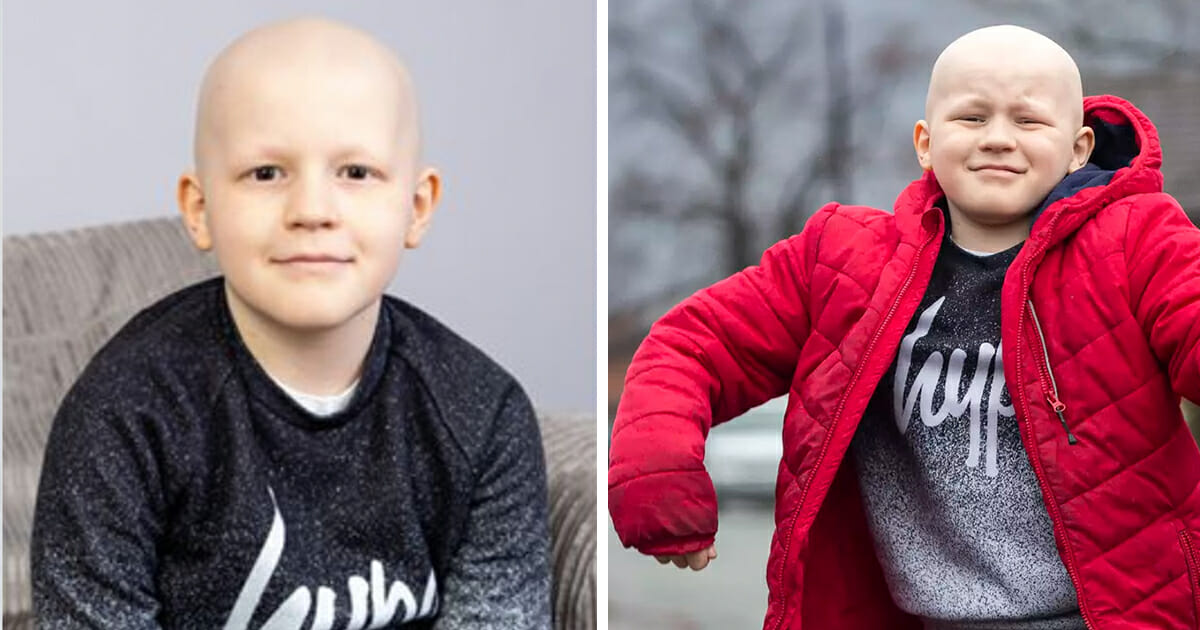 A nine-year-old boy has beaten overwhelming odds to survive an extremely rare cancer after life-or-death surgery to remove and then reinstate his liver.

According to reports, Saul Hayden was diagnosed with stage four rhabdoid tumor of the liver after complaining of a sore tummy. Mom Vicki Kay-Spruce found a lump, prompting her to take him for an examination.

The news got even worse when doctors informed Vicki that her son’s cancer was incredibly rare: medical journals stated just 53 other people in the world had fought the disease, and only five of them had survived.

Even so, Saul showed a bravery we can all be inspired by. The young boy underwent ten rounds of chemotherapy before then having a pioneering form of surgery during which his liver was taken out and then placed back inside his body after the cancer was removed.

Wonderfully, it transpired that the ten-hour operation and the treatment was successful – a scan just one month ago revealed that Saul is cancer free!

Vicki, from Cheshire, England, said: “It was one of the best days of my life. It’s the best news I could have ever wished for. We are looking forward to being a normal family again and it does feel strange to know he doesn’t need anymore treatment.

“It has been the hardest year of our life. This cancer took over everything we have done. Saul is absolutely amazing and I can’t find the words for how proud I am of him.

“He is the most amazing person I have ever met. The way he has fought this is just incredible. I can’t find the words for what this means to us. Even the doctors said they didn’t think we’d ever get to this point.”

Saul fell ill last year after experiencing stomach pains and a loss of appetite. His mom believed he might be coming down with a virus and so in a bid to ease his anxiety felt his belly. It was then that she felt a strange lump, convincing her to take him to hospital.

Vicki said: “I remember the first time they said he had cancer and I was devastated. They said it was in his liver and spread to his lungs through an artery. It was heartbreaking and I didn’t go a single day without crying for a long time.

“You just never think an eight-year-old boy would ever get cancer. It’s terrifying because there were no real signs and he seemed fine. But it had been there a few months and had spread.

“He was given a poor prognosis because of how aggressive it is. This cancer can change quickly and react to treatment in a bad way. We were told it is one of the most difficult cancers to treat. The outlook they gave him was not good but they said they would do whatever they could.”

After 80 days of chemo, Saul’s tumor had shrunk enough to enable doctors to try life-saving surgery. Even so, the operation was so fraught with risk that they they were reluctant.

“Without the surgery there was no chance for him,” said Vicki, adding: “The operation was so rare they were reluctant to do it at all.

“They were worried he wouldn’t make it at all. I was told one in ten adults don’t survive this type of operation so it was even riskier for him. I can’t put into words what it has been like for us.”

Saul’s programme of radiotherapy and chemotherapy continued in an effort to kill off any remaining cancer. A scan after his last round in January showed there was no longer “evidence of the disease”.

“I don’t know how but he has found the strength from somewhere to keep smiling through everything,” Vicki explained.

“They have said they are amazed at how well he has done. We were warned that him not surviving was more likely than survival. It’s the worst prognosis before saying it’s terminal.”

Vicki now hopes that Saul will be back in school by the end of the year. Doctors are to continue monitoring his progress with scans every six weeks to ensure his cancer is caught early if it returns.

God bless you, Saul! We’re so happy you’ve pulled through. Truly, you have the heart of a lion.