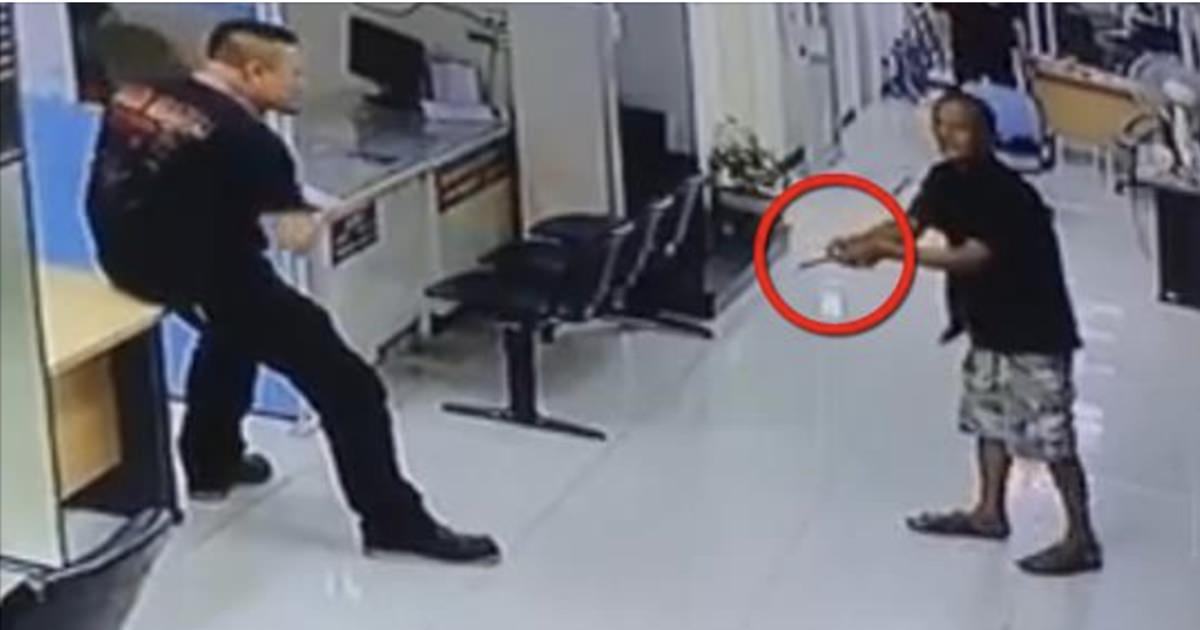 Every time we turn on the news these days, it seems there is some tragic story about a police altercation that took the wrong turn. It’s really devastating that these kinds of incidents often have to end in someone getting hurt or even killed. A lot of police officers are just trying to do their jobs the best way they can, but then there’s the ones who maybe could have used a less aggressive approach to resolving the issue.

Maybe some cops in the world can take a lesson or two from this police officer in Thailand. His general trust in the goodness of mankind and his eloquent way of dismissing violence as a resort, has made thousands upon thousands of hearts melt these past few days. All because of a video showcasing how he tackled a very distressing situation that could have ended very badly.

Police officer Anirut Malee was spending a normal day at work at Huay Kwang police station in Thailand, when suddenly a clearly distressed man walks in holding what appears to be a large knife. The man was not having the best of days and decided to take it out on the local police. You can see it all in the video below:

The video clearly shows how Anirut Malee reacts. You’d think maybe he would pull out a gun or jump at the guy. But Anirut seems clearly calm and confident and simple remains seated in front of the assailant and starts a dialougue with him. He tells Thai Visa News:

“He used to be a musician but had been working as a security guard for three days and had not been paid. On top of this he had had his guitar stolen and it was all stressing him out.

“I heard him out and sympathized and said I had a guitar to give him, and suggested we go out for a meal together. We were conversing in Southern Thai dialect”.

Somehow Anirut managed to calm the distressed attacker – and then the most amazing thing happened. The assailant just calmly handed the knife over to the Anirut without putting up any fight. He broke down in tears and Anirut went up to the man and did the unimaginable:

He gave him a big giant hug! How sweet is that?

But this officer is no fool – he also made sure to check if the man had any other weapons on him. The attacker was then calmed down and taken to a hospital. No charges were filed against the men – this was a happy ending for everyone involved.

Anirut has now been praised by a magnitude of people online – he’s become a global hero.

Anirut is an amazing testament of not just a great police officer, but a great human being. Shows that if we treat each other with love and respect maybe the world can be a better place.

Share if this story touched your soul and made you happy!