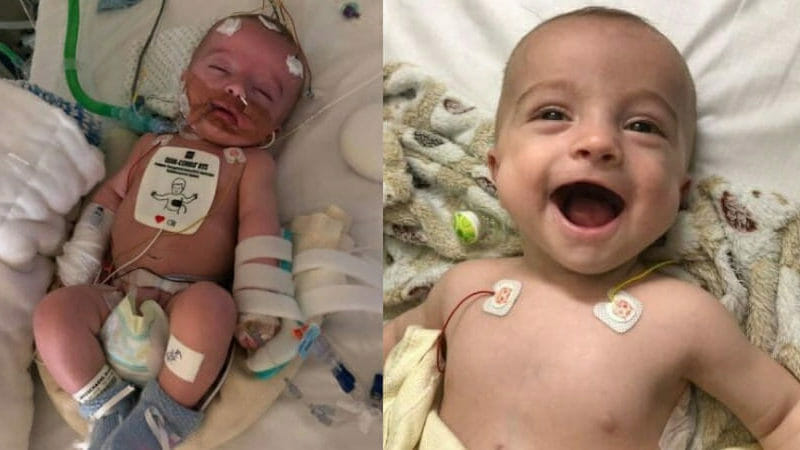 The internet is full of tragic tales and stories fit to make you lose faith in humanity. If one looks, however, there are also those that warm the heart each and every day.

This is one of the those.

A baby who suffered a cardiac rest has reportedly defied doctors’ expectations by waking up from a five-day coma to smile at his father.

Stuart and Emma Labuschagne had steeled themselves to face the possibility of their baby boy never opening his eyes again after he was rushed to hospital in the early hours of March 16.

Little Michael initially began frantically gasping for air and his heart stopped. Paramedics worked tirelessly to save him, but mom Emma has since admitted she didn’t think he would make it.

“At 14 weeks and three days old he went to bed like any other baby. But at 5am he had suffered heart failure. Words cannot begin to describe the pain we felt in that moment,” she said.

“We watched our baby breathless, gasping for air while his heart stopped and paramedics worked to save his life.

“I am so so blessed to be here telling you that he survived.”

By the grace of God, Michael made it through the out-of-hospital cardiac arrest – a feat only seven percent of patients manage – but he was in a coma for the next five days.

Then, on March 21, he opened his tiny eyes and smiled at his dad.

Emma and Stuart were warned by doctors that their son might have suffered brain damage, though scans proved this wasn’t the case.

The cause of his cardiac arrest transpired to be a rare tumor known as cardiac fibroma. The majority of cardiac tumors in children are benign, but they can still cause serious problems due to the importance of the heart.

After surviving his ordeal, Michael was fitted with a pacemaker designed to help control the rhythm of his heart. It’s not ideal, but it’s necessary for now.

“It does hold him back,” Emma said. “It’s as big as the size of the palm of my hand and it has sharp edges.

“Putting that inside a baby is quite uncomfortable for them. But he is amazing, you wouldn’t know looking at him that he is fighting this.

“He’s a lovely little baby – it’s hard to believe he’s going through what he is. He’s a miracle.”

Michael’s parents are now planning to raise money to fly him to Boston Children’s Hospital in the U.S, where it’s hoped their world-class surgeons can resect his tumor.

To that end, they’ve established a GoFundMe Page in the hope of raising sufficient funds.

Emma continued: “They are confident that they can drastically improve, or even cure, his condition by resecting the tumour.

“They want to operate within six months as his heart will be a good size. The fundraiser is doing really well so far, but it’s still quite early days.”

Way to go Michael, what a little fighter you are! We’re with you every step of the way.

Share this article if you want to send prayers and well wishes in Michael’s direction.