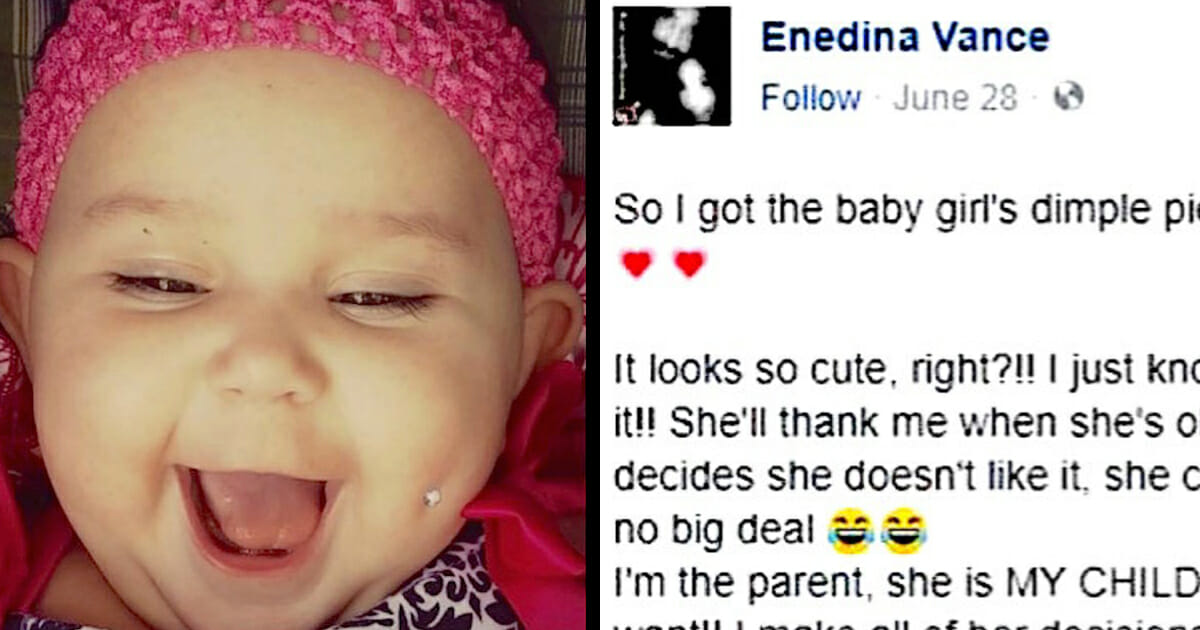 It was back in July, 2017, that Enedina Vance threw the internet into a confusion of controversy when she uploaded a photo of her baby daughter to Facebook.

The wife and mom of six from Ohio posted an image of her little girl smiling … with a silver stud in her cheek.

It’s fair to say the picture went viral pretty quickly, with other parents leaping to condemn Vance for what they perceived as child abuse. It got so bad that the mom even received death threats from disgruntled strangers.

Vance, however, defended her actions, stating it was her right to seemingly pierce her baby’s face.

“I don’t need anyone’s permission, I think it’s better, cuter, & I prefer her to have her dimple pierced. Its NOT abuse!! If it was, it would be illegal, but it’s not. People pierce their babies everyday, this is no different.”

Angry commenters hit back at what they believed to be a step too far. Vance stated that she had people threatening to beat her, take her children away and even kill her.

It wasn’t until people began to look a little closer, though, that they saw the truth behind the photo, and realized Vance was actually using the popularity of the post to raise awareness for something else entirely.

It turned out the image was a Photoshop job; she’d faked the piercing to make an important point about … circumcision.

Vance wanted to use the shock value of the photo to make people think about circumcision for children who are too young to make their own decisions.

“I’m so excited that the world is finally talking about children’s right to physical integrity,” Vance said, as per Metro.

“I wanted people to get outraged, to react, to be completely shocked that someone would pierce their child’s face. Then, after they realize what the post is actually about, piercing the face doesn’t seem so bad when compared to genital cutting. They have to justify their outrage over a piercing vs their acceptance of genital mutilation. No one has the right to alter or modify another person’s body, whether piercings or genital cutting, for aesthetic purposes, not even parents.”

Vance is certainly raising awareness on a topic that doesn’t get much limelight. Every child has the right to choose what they do with their body, as well as the right to not have to live with the decisions others make.