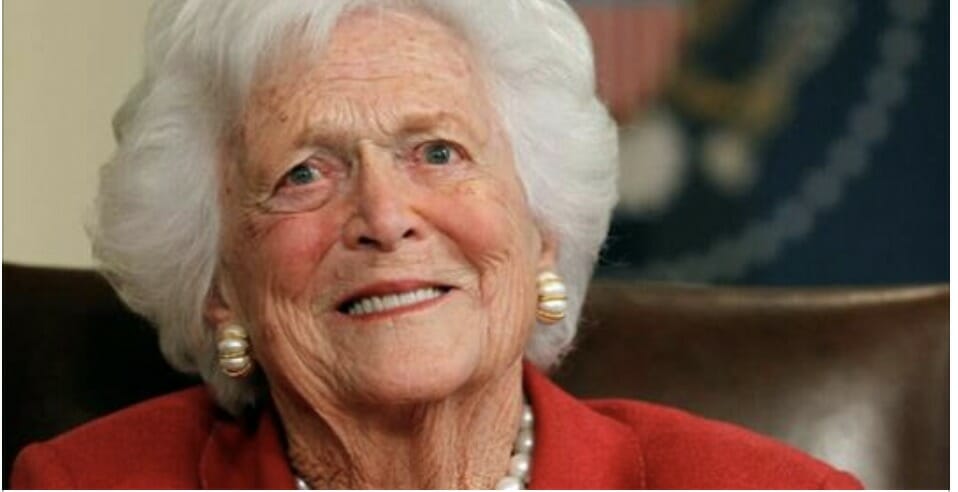 America is still grieving the loss of Barbara Bush, who passed away on April 17, 2018, just one day after electing to forego hospital care.

Love her or hate her, she was an iconic first lady – wife to one president and mother to another.

It’s now been announced just where she will be buried and … well, you might want to grab the tissues for this one.

Gone but not forgotten, Barbara Bush is to be buried beside her daughter, Pauline Robinson “Robin” Bush, who died when she was just 3-years-old.

Robin was born in December, 1949, but, when she was 3, began to complain of feeling fatigued. Since this was unusual for Robin – the girl was normally as active as her older brother George – Barbara contacted a doctor. She assumed Robin had a spring fever.

However, after doctors took blood samples, they came back a few days later with a tragic diagnosis.

I had the privileged of meeting Mrs. Barbara Bush several times & was always charmed by her wit, joy & class. In her memory & the memory of Robin Bush we @DSM NA will contribute to the Leukemia & Lympoma Society of NJ gala honoring @ivycharmatz & encourage everyone to do the same pic.twitter.com/WIBxk7y38Y

In those days, survival rates for cancer patients were virtually non-existent. In fact, the doctor’s advice, as Barbara would later reveal in a 1994 memoir, was to take Robin home, make her comfortable and wait for her to pass away. “My advice is to take her home, love her. In about two weeks, she’ll be gone,” Barbara recalls her saying.

Determined not to give in, however, Barbara and George Sr. decided to do everything in their power to try and save their baby girl. They flew across country to a hospital that was working on treatments for cancer at a time when the subject was taboo.

Following her death, Robin’s body was donated for research. “It made [George] and me feel that something good is coming out of this precious little life. And today, almost nobody dies of leukaemia,” Barbara said of the decision.

Someone sent this to me—I don’t know the artist but I love him. Miss you Gans.

Now that Barbara has passed, she will be laid to rest near the George H.W. Bush library at Texas A&M. Her funeral is to be held this Saturday, April 21 at St. Martin’s Episcopal Church in Houston, Texas.

Although Barbara’s death remains a loss for the country, the idea that she’s with little Robin once again is a comforting one.