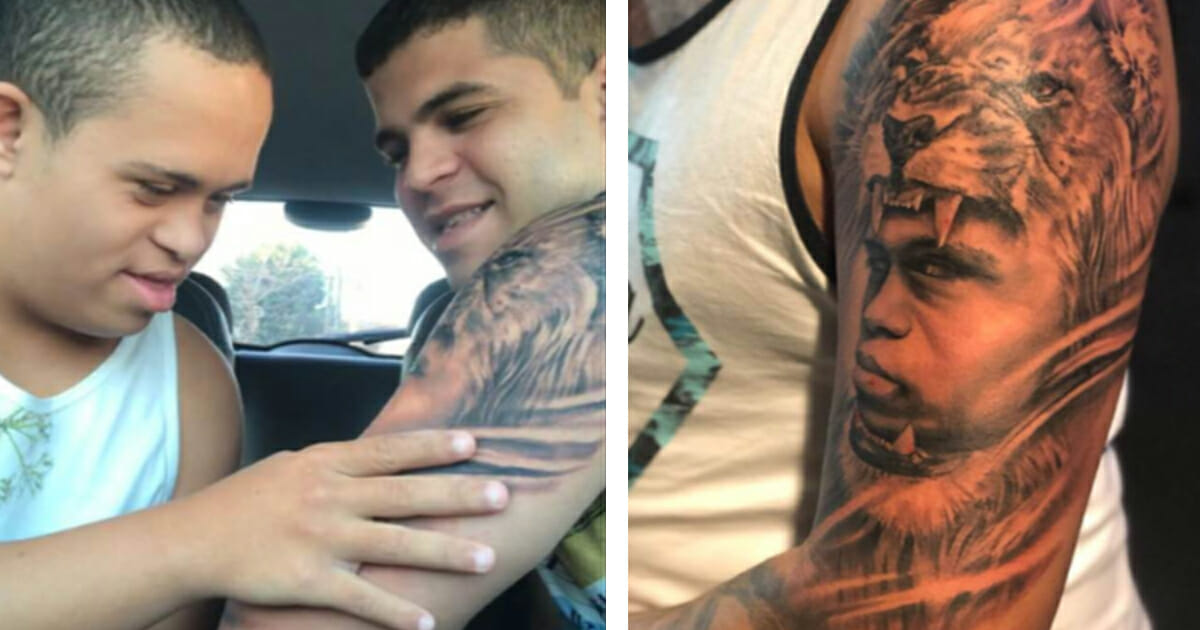 If you grew up with a sibling, you’ll recall all too easily how often you were at each other’s throats.

Arguments, petty quarrels and verbal barbs are commonplace, but there’s also – most of the time – a strong bond of love that runs as an undercurrent.

After all, what are your brothers and sisters if not life-long friends bound by blood?

Well, we think we’ve found a video that proves just how powerful the connection between siblings can be. Mom Soares Sheila posted pictures and a clip to Facebook showing her son, who has Down’s syndrome, reacting to his older brother showing him his new tattoo. To say he approves is a relative understatement…

Yes, it appears the video of Rafa showing his younger brother Erick his new tattoo is enough to have mom’s around the world asking ‘why can’t my children by like that?’

You see, Rafa’s design isn’t just any old piece of fancy artistry. No, it’s a huge tribute on his arm to Erick himself.

The tat is a likeness of Erick’s face inside the mouth of a lion, and it appears Erick is absolutely delighted to see it. The younger sibling can be seen running his hand across his brother’s arm in awe in the video, before giving him a kiss and an affectionate hug.

Proud mom Soares took to Facebook with the clip and pictures, stating: “Look at my puppy’s reaction to the beautiful tribute, his face tattooed inside a lion’s mouth. The video is EXCITING. That’s why I saw Rafa asking Erick to make brave face”.

Then, following the obvious viral success of the video, she added: “My dear friends, when I posted this video I could swear that it would not cause this dimension of sharing that caused.

“THIS IS CALLED GOD. Because he was the cause of the success of this video, because contrary to what many people think, I have never had anything easy in this life, only US and GOD and the closest friends know well what I’ve already spent in life so Erick is here with us.

“Out many battles, many approvals, many fights, many defeats, and many victories, but I never gave up on my children. And I won.

“Do you know why? Because God exists yes, just have faith, perseverance and believe that one day everything will solve.

“I swear to all of you that my intention when I posted this video was just to show one more of their episodes.

“Many thanks to all the friends who shared the video of my children, I want to thank you from the bottom of my heart to all you guys.”

You can see the beautiful video below:

What a shining example of brotherly love. It warms my heart to watch Erick’s reaction.

So, the next time you have your brother or sister in a sleeper hold, think about how much you truly love them, and vice-versa! SHARE this article if you, too, love your siblings!