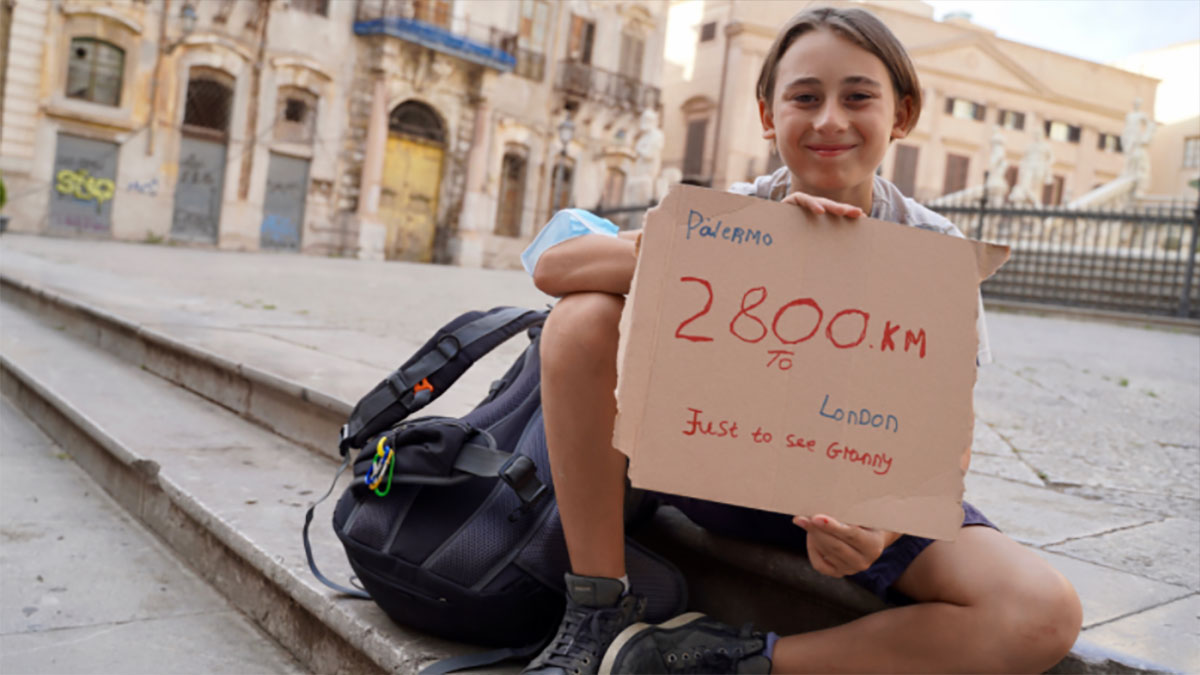 Living through a pandemic means we all have to be careful around elderly loved ones, but for those families that have countries between them, it’s proving even more difficult.

One young boy from Sicily went to great lengths to give his grandmother a hug.

Romeo Cox embarked on the journey of a lifetime with his father to visit his 77-year-old grandmother Rosemary.

It took the 11-year-old youngster 93 days to travel 1,700 miles from his home in Palermo, Sicily, to London.

Romeo and his dad Phil walked through Italy, Switzerland and France and even fought off feral dogs to see his grandma.

He arrived in London and had to wait another two weeks in quarantine before he could finally be reunited with his grandmother in Witney, Oxfordshire.

Romeo, who couldn’t fly during lockdown as no planes were leaving Sicily for the UK, also raised £13,731 ($17,687) for the nonprofit Refugee Education Across Conflicts Trust.

Romeo was inspired by his friend Randolph, who had migrated to Sicily from Ghana, who he said walked farther than he did to get to Sicily, often without food and water.

The moment he finally sees his grandmother at her home has been caught on camera and is a truly touching moment. Romeo’s joy is so relatable, for all those people who live a country away from their loved ones and can’t travel to see them.

Rosemary tells her grandson: “I’m really proud of you. It’s fantastic what you’ve done it really is. Well done! I’m going to give you a special squeeze, well done,” as per the Daily Mail.

Romeo said he could barely sleep the night before seeing his grandma he was so excited.

“Getting closer to Granny’s house, I just started running and left my dad behind. We had the best hug ever – really the best,” he said.

“Granny then made eggs and toast and we talked and talked. I have really missed her, I couldn’t sleep much the night before.

“Our journey has been so far and so many people have helped my dad and I.”

Romeo, whose father is English and mother Giovanna is Italian, moved from Hackney, East London, to Palermo in Sicily last year.

During their adventure, Romeo and his father even met a wild donkey who they named Pedro.

Romeo added: “I loved sleeping under the stars and swimming in the sea.

“We got lost a few times, we slept under a wasp nest which wasn’t a good idea, got bloody feet, but we never thought about giving up.”

Such an amazing adventure this brave youngster has completed and all while raising awareness of those who are forced to leave their war-torn countries to survive.

Well done Romeo! Let’s show our support for this incredible young boy by sharing his story.