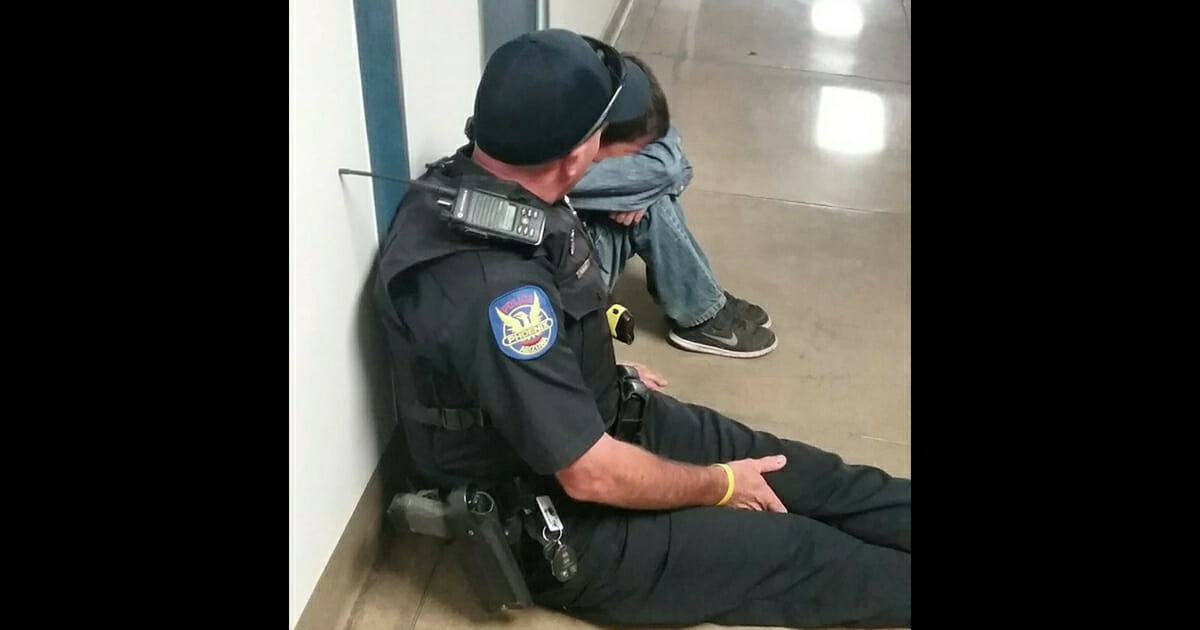 Old or young, rich or poor, famous or little known … it doesn’t take a lot to be a nice person.

It’s more important than ever in today’s world of doubt and bad news that we treat one another with kindness; that we restore faith and compassion where we see it faltering.

In no instance is that more important then when we encounter young people struggling.

Phoenix resident Edna Guerrero took to Facebook to hail a moment she witnessed between an emotional boy and a school resource officer. It might not make headlines around the world, but it’s certainly worth a look if you want to see something encouraging today!

School resource officer Rusty Baubie is always endeavouring to ensure the well-being of his students. After all, he promised once upon a time to serve and protect.

According to Guerrero, Baubie often shrugs off his selfless acts as merely doing his job. However, Guerrero knew she had to shed a spotlight on Baubie after witnessing a particularly beautiful moment between him and a dejected student.

Posted by City of Phoenix Police Department on Monday, 7 May 2012

Baubie happened to be in the right place at the right time. He heard a student crying in the hallway and decided to sit down next to him. The boy had buried his hands in his knees; it was all a bit too much for him.

But the officer’s presence alone wasn’t enough to calm the boy, who began to reel off the negative thoughts bouncing around inside his head.

There are many roles of today's police officers, often times it is just being a friend. School Resource Officer Rusty Baubie #8258 takes the time to comfort a student.

Posted by City of Phoenix Police Department on Wednesday, 8 August 2018

As per Guerrero’s post: “A student was having a difficult time, was screaming and inconsolably crying, saying sad and negative things about himself.

“This officer looked through the eyes of this student and immediately showed mercy.”

Instead of telling him off for being loud, or trying to move him from the corridor, Baubie saw the boy for what he was; a struggling kid who was in dire need of some encouragement.

“This officer spoke softly to the student letting him know that he did matter, that he was important, that he was loved,” Guerrero said.

“This officer helped this student understand that we all make mistakes and that those mistakes do not define who we are and we just learn from them and move on.”

According to Sgt. Armando Carbajal – public information officer at the Phoenix Police Department – Baubie has been with the force for 13 years. A husband and father, he knows just how far a shoulder to cry on can go.

What an incredible story … it certainly warmed my heart. We need more people in the world like Rusty Baubie, I’m sure you’ll agree.

If this story put a smile on your face, share the article on Facebook with your family and friends.