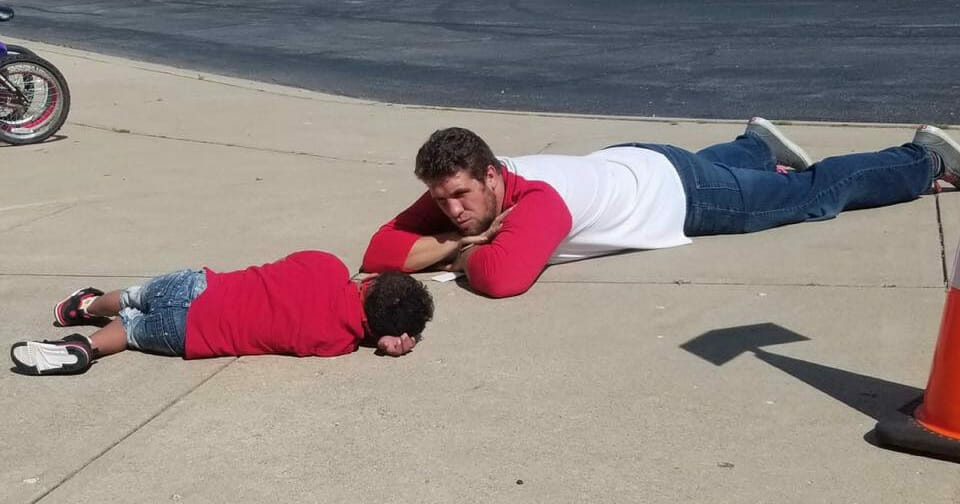 We all have our tough days and often it’s how those around us react that determine how we deal with our emotions.

For third grader LJ his day went from bad to worse when the school bus was late. He desperately wanted to go home to the comfort of his parents and was now delayed.

LJ, who has Down syndrome and autism, felt so over his day that he could do nothing else but slump to the floor in a heap of frustration.

That’s when his new assistant principal decided to join him and it was just the lift LJ needed.

LJ is an eight-year-old student at Garfield Elementary in Marion, Ohio where his friends and teachers love him for his infectious and outgoing personality, according to Happiest.

Mrs. Clark’s class decorated socks for World Down Syndrome Day- LJ even decorated a pair for Mrs. Lemont, who forgot hers today!

At the end of a hard day at work we all love the prospect of going home to see our loved ones and relax.

So imagine how upset LJ was when the school bus didn’t show up? He was so annoyed all he could do was lie on the ground.

The school assistant principal Mr Smith saw LJ and decided he was going to lie on the ground with him. A student aid captured the moment and shared it on social media.

“I absolutely LOVE this,” LJ’s mom Steph Compton wrote on Facebook. “LJ’s school has a new assistant principal this year, Mr Smith. Apparently, LJ was having a ‘moment’ and he got down on his level to help him out. This is why even though we live across town, LJ still goes to Garfield!”

Amber Mckinniss, the student aide who took the photo, responded to Steph, saying, “It was the most amazing thing I’ve seen! Our hearts melted and LJ enjoyed it.”

Steph is completely reassured that she is sending her son to the right school.

“It’s really awesome to know from a parent’s standpoint that there are people that care that much about your child,” she said. There needs to be more people like Mr. Smith in the world; someone who shows love and understanding before anything else.

Please share to pay tribute to Mr. Smith and all the wonderful teachers out there who make such a difference in our children’s lives.