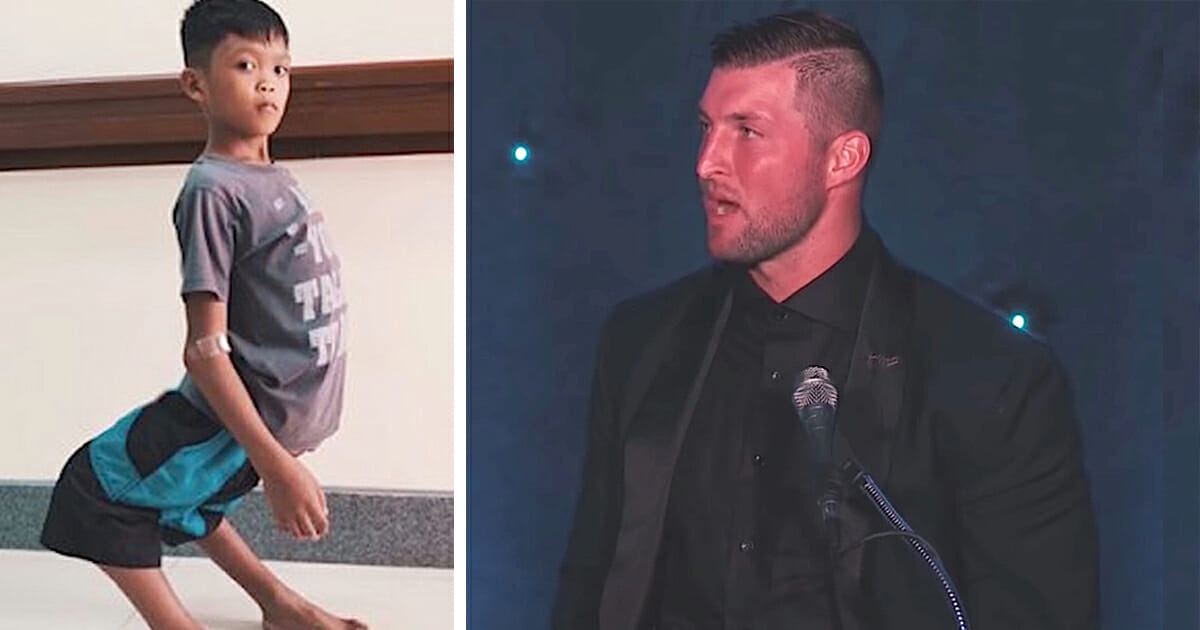 Superstar athletes pretty much have it all, don’t they? Wealth beyond imagination, the adulation of millions of fans the world over, and, of course, fame and everything that goes with it.

Of course, just because they’re idolized by the masses doesn’t mean they’re all compassionate people. Athletes are normal human beings after all, and as such are subject to all flaws thereby associated.

No one, however, can accuse Tim Tebow of being anything but a shining example to children everywhere. The former NFL star, now plying his trade in the MLB, has launched a number of charitable initiatives over the years. Without a doubt, one of his most impressive is the Tebow CURE Hospital in Davao City, Philippines.

Since its inception, the Tebow CURE Hospital has performed 2,139 surgeries on individuals who otherwise lack proper access to medical care. A recent story has gained particular media attention, and goes to show just how far Tebow’s work is going…

Dr. Tim Mead is an on-staff surgeon at the Tebow CURE Hospital. As such, he can attest to the sort of procedures that are undertaken there.

The case of one 11-year-old named Aldrin, however, shocked even him. Aldrin had a horrible congenital knee deformity, which Mead described as leaving him to walk like a flamingo.

“Essentially, Aldrin’s knee bends the wrong way like a flamingo,” Mead wrote on the CUREblog. “When we see children with knees like this early, we can often cast the knees and improve them …

“When young, the surgery is much less involved. At age 14, surgery is a true challenge.”

“Aldrin, your surgery is over," said OR Nurse Jaime. Aldrin then responded, "Only by the grace of God," to which we exclaimed, "Amen!" This is what we do every day. #MondayMotivation https://hubs.ly/H09VkkR0

Since Aldrin’s problem had been ignored for the entirety of his life, Mead and his team had their work cut out for them. First there was stretched skin on the front of Aldrin’s leg, then there was also a contracted tendon and even a malformed femur.

Without going into too much detail, Mead’s work – undertaken so as to alter Aldrin’s legs so that they function properly – involved slicing, dividing, sawing, hammering, screwing and stitching. In the end, the 11-year-old’s surgery was a success.

Following the operation, the boy now must undergo physical therapy. His journey is far from over, but if he sticks to his program he’ll not only be able to stand up properly, but walk like a normal child as well well.

“When he had surgery, it was okay because their staff gave us encouragement, and they take care of us very well,” Aldrin’s mom said.

“They encourage me and gave me strength that God knows and has an idea of what is best for him. God is in control just like in your doctors and whatever is good for Aldrin.”

We’re so thankful that Aldrin has a second chance, and all because of Tim Tebow’s brilliant foundation. Without it, who knows what Aldrin’s life would have been like!

We can’t be the only ones that want to say a big thank you to Tim, Dr. Mead and his team, and wish Aldrin well! Share this article if you do to!