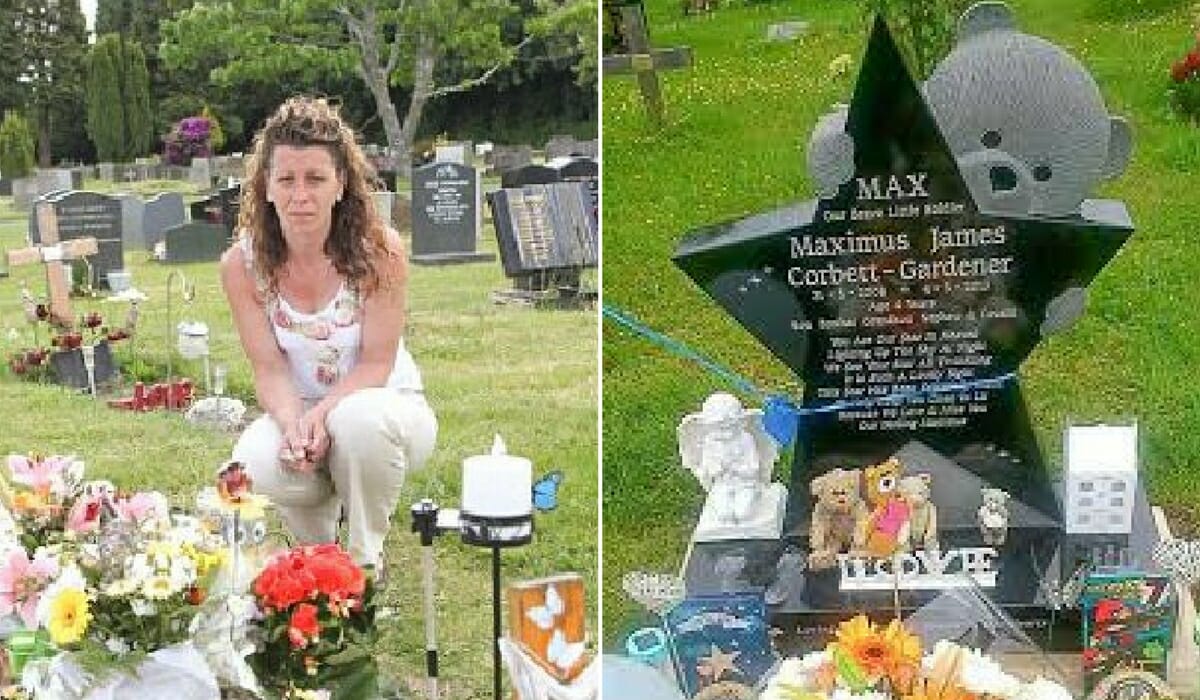 Losing a loved one is never easy. Losing a child, however, may be the most difficult challenge a human being can face during their lifetime.

Jo Corbett-Weeks can sadly attest to this. Her son, Max Corbett-Gardener, was just 4-years-old when he passed away due to complications related to epilepsy. She and the rest of his family were left to grieve as they buried a little boy taken far too soon.

Jo saved up $4580 to pay for a unique headstone for Max, one that would reflect his energy and spirit. The headstone was a star-shaped stone being hugged by a teddy bear; a fitting tribute to young Max.

However, things would soon take a turn for the ridiculous. Just a few days after it was put up, Max’s headstone was removed, without consent of the family. The reason? Well, it’s more than just slightly confounding.

It took three years for Jo and her family to raise the money to buy the headstone she wanted for Max, but finally, on what would have been his 7th birthday, it was fixed in place.

Within three days, however, and without any consent from Jo herself, the stone was removed.

Why, you ask? How could such an abhorrent thing be allowed to happen?

Had lodged a complaint

This is where it truly takes a step into bizarre territory. According to the Malvern Town Council, in charge of maintaining the cemetery, a family had lodged a complaint that the headstone was not “in keeping” with the others.

Shockingly, Jo wasn’t even informed by the council of their decision. As per AmericaNow, she said: “I was totally unaware this was going on. The council did not contact me and it was the stonemason who told me he’d been ordered to remove it.

“I feel upset, distressed and angry. We have been through so much as a family. I could understand if the grave was uncared for or unsightly, but it isn’t. The headstone meant a lot to me and the family but now we are fighting to have it put back.

“It’s a horrible situation. We just want to have somewhere to grieve.”

UK: Jo Corbett-Weeks, 42, saved to have a special headstone made for Max, her son who died from multiple congenital issues, but the stone was removed from Great Malvern Cemetery, Worcestershire, following a complaint from one person.#WhatsWrongWithPeople pic.twitter.com/9kUm28iD1q

The council reportedly claimed that there is a usual application process for headstones, and that if Jo had submitted an application she would have been informed that the star shape was against regulation. Had Max been buried in the children’s area it would have been fine, but because he was laid to rest in the adult area – to be closer to his family – the headstone was forbidden.

In a statement on the matter, a Malvern Town Council spokesman said the following: “We have a conformity of shapes in our lawn cemetery. We were contacted by people who objected to the shape. The longer it stayed up, the harder the process would have been. It was a very difficult decision to remove it but one we had to make straight away.

“It wasn’t necessarily an objection to the shape but why we appeared to be applying one rule to one family and other rules to another. The stonemason in this situation did not have permission to put the stone up – and the stone is not in keeping with the graves in that area. By not following the correct process he has caused considerable distress to both families.”

Sure, Jo should have submitted an application through the proper channels, but it can’t just be me that thinks it’s in extremely poor taste that someone could complain over the shape of a child’s headstone and then petition that it be removed. Max’s headstone wasn’t inappropriately large, obscene in nature or – let’s be honest – that different from other headstones. Jo and her family have the right to celebrate his life however they see fit, and to take away the legacy she’d worked so hard to obtain is, frankly, wrong.

What do you think? Is it right that Max’s headstone was taken down?

If you, too, are appalled with the decision, SHARE this story to show Jo that she has your support.