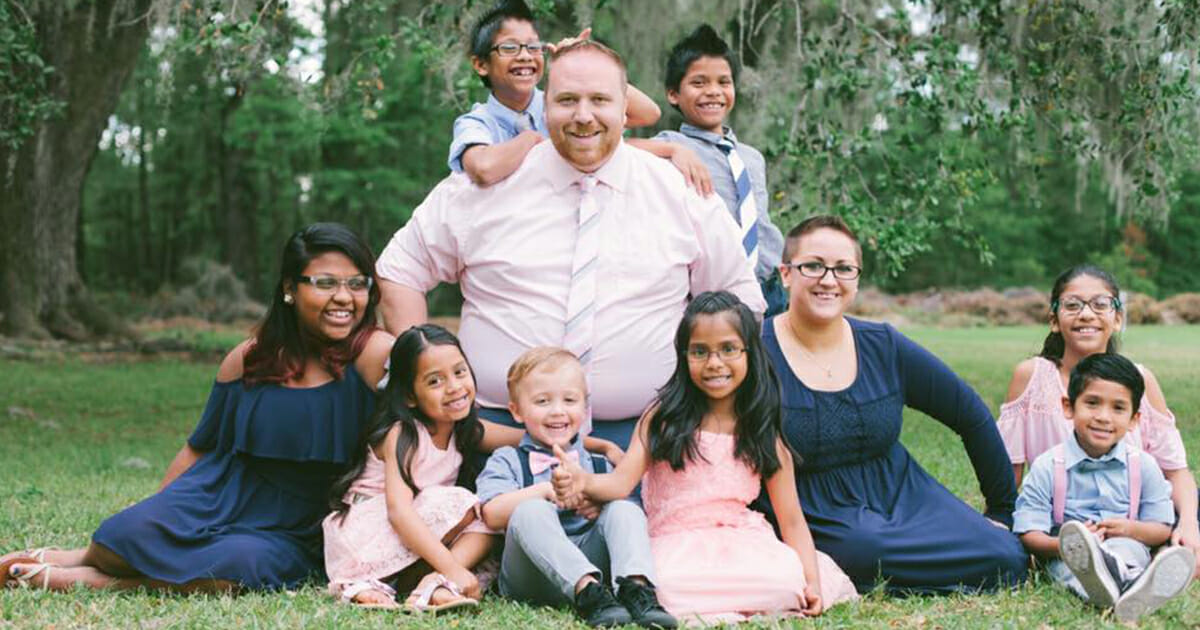 When it comes to families who are ambitious concerning children, they don’t get much more spectacular than Josh Clark and wife Jessaka, of Georgia.

It was always Josh’s wish to have a big family – one at least ten kids strong – and he told Jessaka of that dream on their first date.

While you might think many women would be put off by this declaration, Jessaka was, in fact, totally on board.

“I grew up with a lot of foster brothers and sisters and my parents were foster parents, so I was used to having lots of kids around the house.”

Two years ago, when the couple were married with just one biological son, Noah, they received a call about the ‘Super 7’ siblings; seven children who had been abandoned by their mother and were in foster care. Josh approached his wife to ask what she thought about adopting them.

“My eyes probably got as big as his and we both said the same thing: ‘We need to pray about this,’” she told Alive 11.

“We prayed that night and didn’t sleep well because God told us that these were the kids for us.”

The Clark family officially adopted the siblings, who had been in foster care for more than three years (1,359 days). In just one day their family grew in size from three to 10.

Josh, Jessaka, and Noah immediately fell in love with the ‘Super 7,’ and welcomed the siblings into their family. The morning the children were officially adopted, Josh woke them up with streamers and confetti to celebrate.

But the couple weren’t quite finished with expanding their family. They got a call from the adoption agency, one informing them that the ‘Super 7’ had an eighth sibling — a baby sister.

The Clarks immediately started the process of adopting her, but hit a bump on their road to bliss when they realized they didn’t have the room to legally accommodate another child.

Their three-bedroom house in Effingham had four sisters sleeping in one bedroom and four brothers in the other. As it was, a family friend came up with a plan, setting up a GoFundMe page to raise the cash needed to pay off their debts and move into a bigger home —  reuniting their family with their baby sister.

Jessica said despite the hardships they had faced, it was worth it in the end: “You have to know that God called you to adopt. And you need a lot of support. You will feel the greatest joys. And you will feel the biggest heart breaks. But just like there is pain in labor, at the end you get a beautiful child… or seven.”

Share this incredibly heartwarming family story to inspire others to follow their dreams – no matter how big!