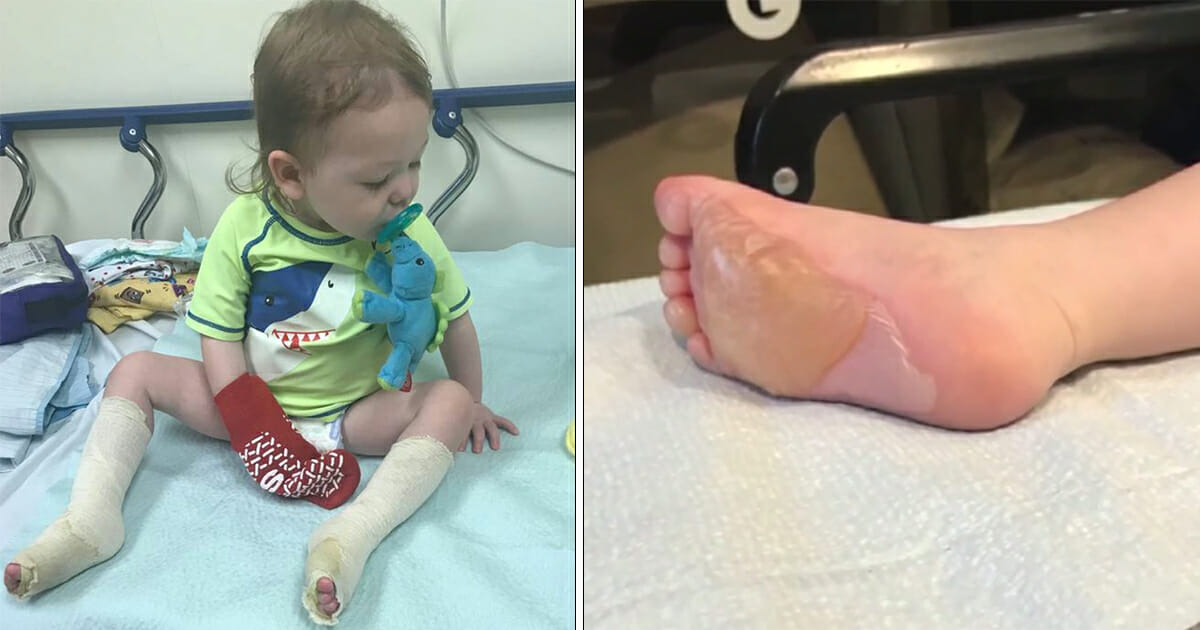 The summer promises all sorts of pleasures that can’t be found at other times of the year.

When the sun is shining and warmth is in the air, the natural thing to do is let go of your stresses and enjoy the moment.

That’s exactly what Andrew Sechrist was hoping to do when he took his family to a local splash pad.

Little did Andrew know, however, that a seemingly harmless decision to allow one of his children to go shoeless at the park would end up resulting in second-degree burns.

Andrew now has a warning for everyone planning on enjoying the rest of the summer sun. We think it’s one people should heed.

When Andrew Sechrist, of Seattle, took his four children to a local splash pad, he believed the only thing they would return home with would be a bag full of happy memories.

“Everything was going well for about 15 minutes,” Andrew told CafeMom. Then, suddenly, his 17-month-old son Jackson began to scream.

“I saw Jackson off to the side, about five feet from a water toy. I ran over, thinking he had fallen, to console him,” Sechrist explained.

“I picked him up and took him to a different section of the water area, but he was still inconsolable.”

Andrew tried to dry his son off, still not aware of the severity of the problem. When he got to little Jackson’s feet, however, he realized something was wrong.

“I could feel the heat coming off of them,” he said. “I looked down and noticed that the skin had basically melted on the bottoms of both of his feet.”

It transpired Jackson had walked over a metal electrical grate, one that had been cooking in the sun so that it held a temperature of well over 100 degrees.

Speaking to Q13 Fox, Sechrist said his son’s feet were “white”, and in a bad condition.

Q13 Fox tested the grate the next day and found its temperature to have reached around 130 degrees.

Sechrist said: “Just putting my hand on here like that, I can’t keep it here for half a second, and my 1-1/2-year-old son walked across [it].”

Trip to the hospital

Sechrist’s wife took his other three kids home, while Sechrist himself went with Jackson to Seattle Children’s Hospital.

After a series of examinations it was determined that Jackson had suffered second-degree burns. He was transferred to Harborview Medical Center to be treated by a specialist in their burns unit.

Indeed, we want to ensure that no child has to go through what Jackson did. We can’t begin to imagine the pain he must have been in.

Share this article to help us spread the word!