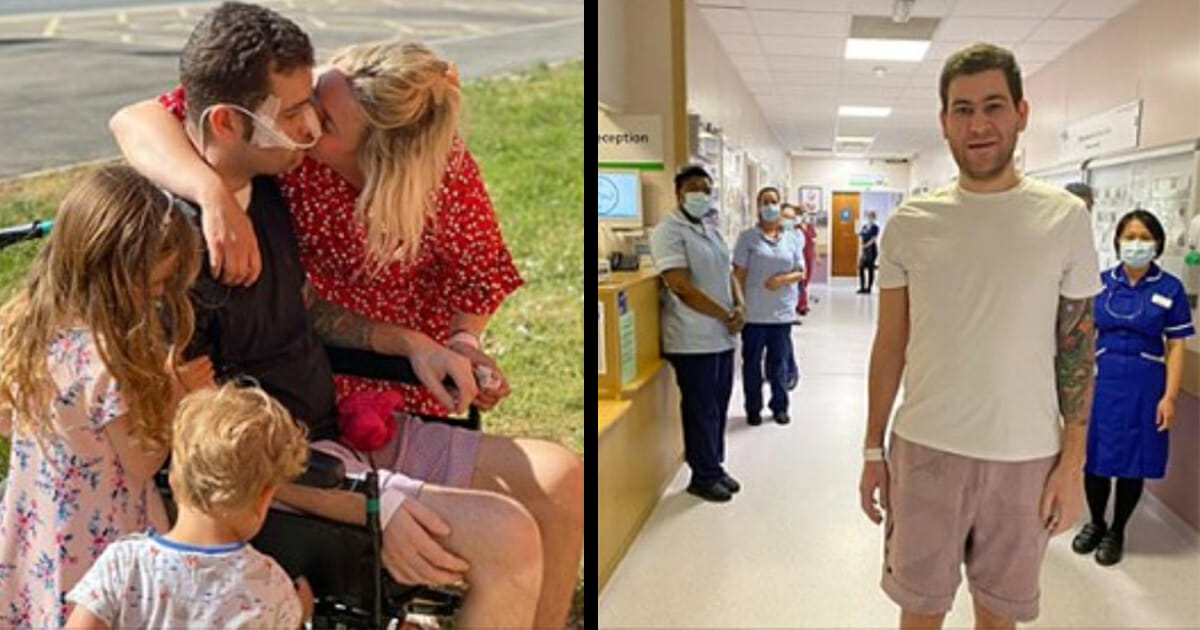 A father-of-two was able to walk out of hospital in time for his son’s second birthday, despite having battled coronavirus, double pneumonia, sepsis, heart failure and two strokes.

As per the Daily Mail, Omar Taylor, 31, spent a total of 30 days on a ventilator, during which time he lost the power of speech and the use of his right arm.

And yet he was able to make a remarkable recovery after his family had been told to prepare for the worst. Omar was himself warned that he would never walk again, but left the hospital on foot, to rapturous applause from the gathered nurses.

“It was utterly overwhelming. He was determined to get out in time for our son’s second birthday and he did it. We’re going to have a really big party, just the four of us. It was amazing seeing everyone coming together to welcome him home.”

Omar, who lives in Colchester, UK, will now receive 12 weeks of intensive rehabilitation at home. He’s already recovered some of his speech, with doctors confident his paralyzed right arm could also make a 90 per cent recovery with continuous treatment.

“It has been so difficult, particularly with two young children,” Kaitlyn said. “Harrison, who is two next week, didn’t understand and was scared of his dad for the first couple of hours after he came back.

“But Vivienne, our four-year-old, is a proper daddy’s girl and hasn’t left his side since he’s been home. She’s been helping him to the toilet and the shower and she’s just so, so happy that he’s home.

“In total, he was away for eight weeks. That’s not so long for an adult, but for children it seems like forever. They didn’t think he was ever coming back.”

Omar’s trials began back on March 19, when he was rushed to hospital with breathing difficulties. Having suffered from a pre-condition of ulcerative colitis, he was on longterm steroids and amino suppressants. Doctors think the underlying condition placed his immune system at greater risk.

After just four days in hospital, Omar’s condition further deteriorated and was moved to the ICU and placed on a ventilator.

“Omar was struggling to breathe for three days, even though he was being given the highest possible amount of oxygen through a mask,” Kaitlyn explained, as per MailOnline.

“Then one day I received a call from the hospital at 4:45am telling me to prepare for the worst. They had decided to intubate him and put him in an induced coma.

“I had to look at my four-year old and my two-year old and think about how I would tell them that their father was dying.”

Several days of fear ensued, before Omar’s condition began to stabilize and nurses gradually moved him off of sedation.

Kaitlyn said: “They took him for a CT scan while he was still on a ventilator. It took seven staff four hours to get it done and they found that he had suffered a double stroke.”

On April 18, a month after his admission to hospital, Omar was moved out of ICU and into a stroke unit. Thereafter he tested negative for COVID-19 and could see his family for the first time in six weeks.

“It was so emotional. He was in a wheelchair and we met him out in the open air. Before then, when we spoke to him on videocall, he had a blank stare and we didn’t even know if he could recognise us.

“It was as if he was looking through us. But when we saw him, he was smiling and able to put his arm around the children. It was the first time in six weeks that he had seen someone who wasn’t wearing PPE, let alone his family. It was magical.”

Magical indeed! Well done, Omar, we’re so happy you were able to emerge triumphant after such a trying battle.

Share this article to pay tribute to this brave man, and to all the nurses and doctors waging war on the frontline against coronavirus.