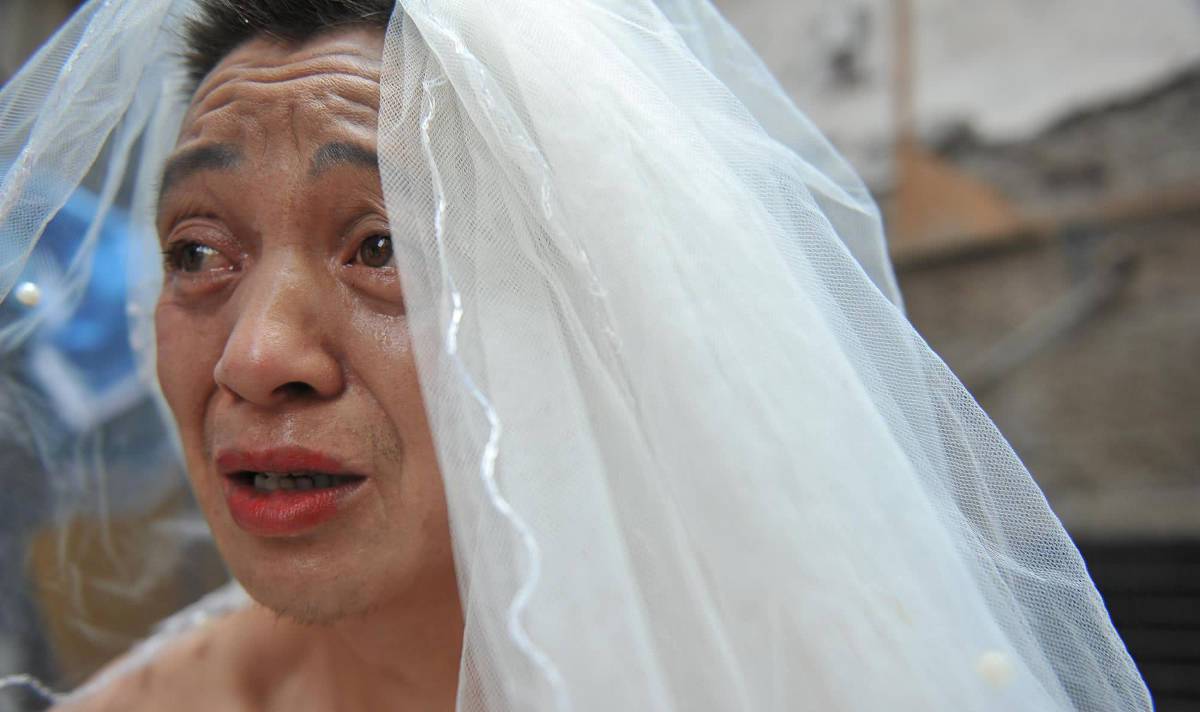 A 45-year-old carpenter has started going to the main square in the Chinese city of Zigong.

The father has been drawing attention due to the fact that he wears a wedding dress and lipstick. Passers-by often laugh, point and take photos, not knowing the real reason why he does what he does.

When they realize, their laughs soon turn to tears…

So, what drives him to head out, day after day, in such strange attire?

Well, five years ago, Guo Anquan’s daughter was diagnosed with leukemia. She had just turned 4-years-old.

From that day forward, Guo spent his life savings in a bid to keep his daughter alive.

Then, amongst other things, he borrowed tens of thousands of yuan to pay for her treatment in a hospital in the provincial capital of Chegdu. After eight gruelling rounds of chemotherapy, the little girl’s cancer went into remission.

Then, tragically, in February, it returned. Already in serious debt, dad Guo had to rely on gifts and donations from strangers to keep the dream of ensuring his daughter’s survival alive.

However, it wasn’t enough. With his little girl sick once again, he was forced into drastic measures.

To draw attention to himself, he has begun walking around the main square in his hometown of Zigong, wearing bright red lipstick and a white wedding dress.

Beside him, he has a sign that says he is “looking for a partner” to help save his daughter, and that he will work the rest of his life to make sure any loan is repaid.

Though the method is unusual, it’s been effective.

Guo says that he has managed to collect just over 16,000 yuan for his daughter’s treatment so far, according to news site Shanghaiist. A GoFundMe page has been set up for anyone who wants to help with donations. It can be found by clicking here.

Guo explains that so long as he can save his daughter’s life, he will do whatever is necessary.

“My dignity is no longer of any use to me. Just as long as there are good people who want to help save my daughter, I will pay any price,” he says.

Unfortunately, Guo is just one of many desperate people whose love has fallen through the cracks in China’s thin social security network, resulting in strange and unusual fund-raising efforts.

It hurts my heart to see this desperate dad taking all possible measures to pay for his daughter’s treatment.

In many places around the world, we are fortunate to have world-class care that covers us when we fall ill or sick.

That’s not the case for Guo, but we have to support his magnificent effort so far and cross our fingers that his daughter can pull through again.

Like and SHARE this article, not only to show your support for this brave dad and his courageous little girl, but also to show you would do everything in your power to save you child!