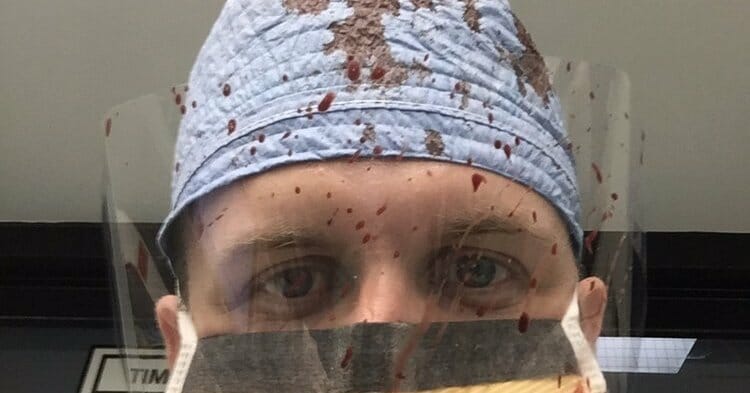 Gun violence in the U.S.. It’s a topic impossible to ignore in the current climate, and yet one the National Rifle Association (NRA) continue to fight to enable.

Only last week did the NRA send the controversy gigameter through the roof with a tweet advising doctors advocating tighter gun restriction to “stay in their lane”.

Well, medical professionals have now hit back, sending a pretty powerful message of their own through gruesome photos depicting exactly what it’s like to have to treat victims of gun violence …

“Someone should tell self-important anti-gun doctors to stay in their lane,” the NRA tweeted last week. As it happened, the tweet fell in the exact span of seven days as a gunman opening fire inside a bar in Thousand Oaks, California, killing 12 people.

The tweet was purportedly in response to a new paper by the American College of Physicians, one that details suggestions for tackling the current problem with guns.

In firing back a shot of their own, however, the NRA only rallied their opponents. In this case, it happened to be doctors who have first-hand experience in treating victims of shootings.

Forensic pathologist Judy Melinek responded on Twitter: “Do you have any idea how many bullets I pull out of corpses weekly? This isn’t just my lane, it’s my fucking highway.”

And Melinek was far from alone. Other doctors, surgeons and physicians joined the challenge against the NRA, sharing photos and anecdotes of their own regarding what it’s truly like working to save the victims of gun violence.

“16 y/o GSW to the Aorta. @NRA his mother is in the waiting room,” Robert Lyons wrote on Twitter, accompanying his words with a photo of blood spattered on his face mask. “Should you tell her he didnt make it? Didnt think so. #stayinmylane #ThisISMyLane”

Adam Shiroff, director of the Penn Center for Chest Trauma in Philadelphia, meanwhile, told BuzzFeed that he has been treating shooting victims for more than a decade.

“Without question, the most difficult part, as has been echoed recently by friends and colleagues on Twitter, is not the technical aspects of complicated and high-risk operations, it’s the human aspect,” he said. “It’s having to change your bloody scrubs before you go talk to the family to tell them that their son is dead.

“It’s standing at the sink after someone didn’t make it to wash your hands six times to get the blood off because there was no time to change the glove with a hole in it. The realization that it could have been your son, daughter, father, mother who was shot because bullets don’t care if you are black or white or rich or poor.

“It’s devastating to the health care team and we do it every single day.”

I’ll stay in my lane when you pry the life SAVING instruments from my cold, dead, hands.

Another, somewhat hard-hitting, photo from Twitter user Stephanie Bonne simply showed a blood-stained surgery room. Her caption was “She didn’t make it”.

Hey @NRA ! Wanna see my lane? Here’s the chair I sit in when I tell parents their kids are dead. How dare you tell me I can’t research evidence based solutions. #ThisISMyLane #ThisIsOurLane #thequietroom pic.twitter.com/y7tBAuje8O

The battle for tighter laws on gun use is one that looks set to simmer for a long time yet. On the one hand, you have the people who are aware that civilians having access to high-power firearms will continue to result in mass-shootings and incidents wherein others are killed in absurd situations.

On the other, you have those who are afraid to lose their ‘right’ to own a mechanism capable of delivering death in an instant, for no other reason than the fear of themselves being targeted for instant death with the very same mechanism.

If you stand in favor of far stricter gun control, share this post on Facebook and help support all the doctors in their fight against the NRA!