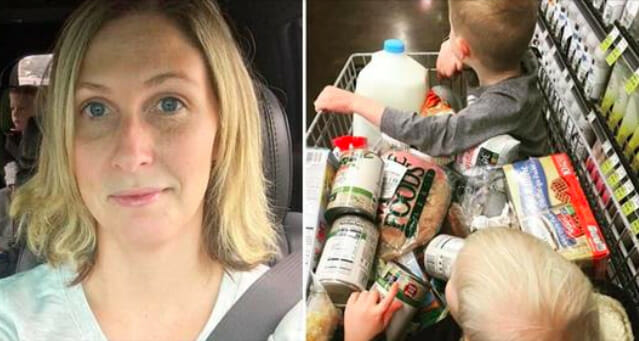 We go through life in a flash. Running around between appointments, errands and of course, hours after hours of work.

Our children are certainly precious to us, but do we always take the time to really slow down and give them the appreciation they need?

One mother was approached by a complete stranger one day while doing groceries with her two kids. But little did she know that the words he would tell her would remain etched in her mind forever.

“Have you ever had a conversation with a total stranger and later realize that person must have been sent by God?” the mom, Leanne, later wrote on her Facebook page.

She then proceeds to tell the story of what happened to her at the supermarket that day.

As Leanne was out doing her groceries, an elderly man approached her to comment on how cute her two children were. He then simply went on his way. But moments later, Leanne noticed that he was walking back straight towards her.

“He then began a story about when his son was five years old. His son had asked him to build a birdhouse. He told him no because he was really busy with “important” things for work. He watched his disappointed five year old slump off without crying or making a scene, and suddenly he felt terrible for breaking his son’s heart. He called his son back to him. Together they went to the store to buy the materials and they built the birdhouse.”

The stranger added that now, 40 years later, he can’t remember a single thing about what was so important about the work he had to do over the years. But, the experience of building that birdhouse and bonding with his child are still clear as day.

He looked Leanne straight in the eyes and lovingly revealed something amazing: they still had the birdhouse.

“My eyes immediately flooded with tears. Even though I’m with my kids for the majority of our days, I don’t always devote myself fully to them. I halfheartedly do activities with them. I fuss at them. I get distracted by chores and my to do list and my phone. This man may never know just how much he stopped me in my tracks, helped me adjust my priorities, and inspired me to slow down and be more intentional with my family.”

Such wise words — don’t strangers sometimes just have the most meaningful things to say? Please share if you agree with the kind advice this elderly man had for Leanne.