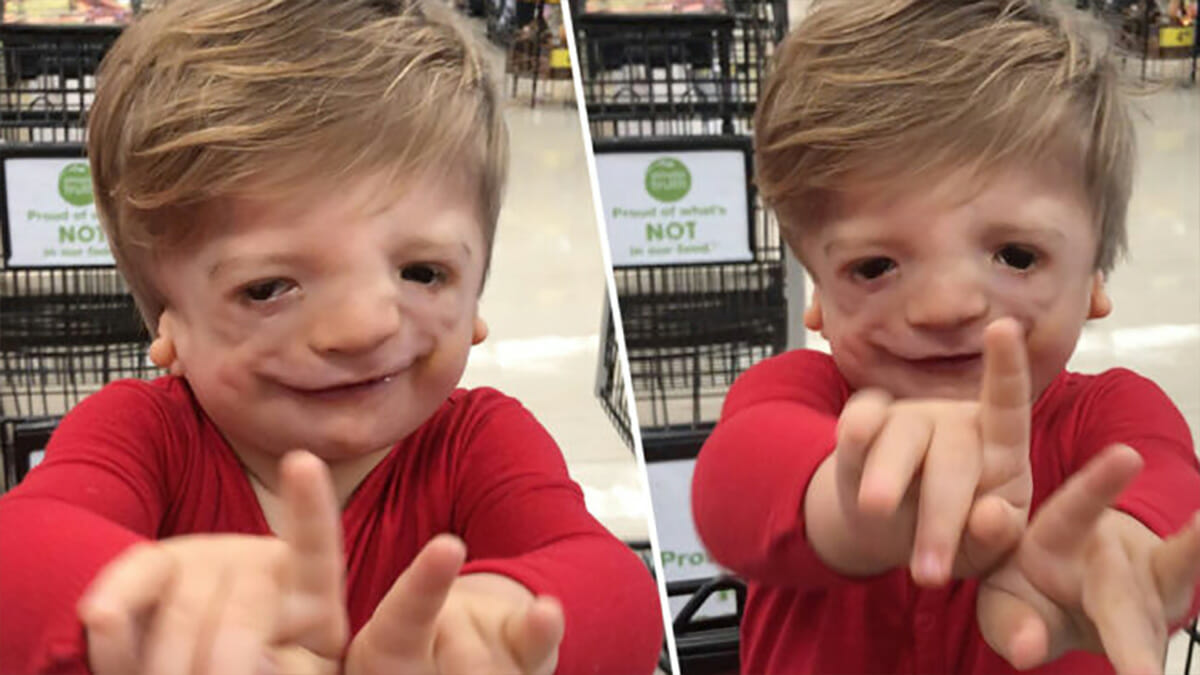 The magical moment when your child says the words ‘I love you’ for the first time is one no parent can forget. But for the mom of this adorable toddler it was extra special.

PJ was born with a rare genetic disorder that has caused the underdevelopment of his ears, making communication difficult.

As his mom Crystal Kouri pushed him around the store in a cart he did something that made her heart melt. Now she’s sharing the special moment with everyone.

PJ was born with Treacher Collins Syndrome which affects the development of the bones and other tissues of the face.

For two-year-old PJ the rare condition has left him hard of hearing so he’s been working on sign language.

But on a recent visit to the store, in Los Angeles, California, he surprised his mom by signing “I love you” for the very first time.

“PJ has Treacher Collins syndrome, like Auggie Pullman, the fictional character from the movie and book, ‘Wonder’,” Crystal said according to Storytrender.

“Treacher Collins syndrome has caused PJ’s ears to be underdeveloped, resulting in moderate hearing loss. We began sign language immediately as a way for him to communicate with wearing his hearing aid,” she added.

The emotional moment happened back in January when he unexpectedly signed the three special words. His proud mom then returns the sign while also saying “I love you.” PJ then mimics her saying the three-letter word.

“Hearing him say and sign ‘I love you’ was as emotional and pivotal as the first time he signed ‘mama.’ I stopped right there in the supermarket to record him,” Crystal said, according to The Epoch Times.

Despite his young age this impressive little boy has already learned 250 words, both verbal and in sign language. This was the first time PJ had said these specific words.

“His condition has caused him to have five major surgeries so far which have enabled him to breathe, eat, and grow normally,” Crystal explained.

According to the US National Library of Medicine, Treacher Collins syndrome affects around 1 in every 50,000 people. Those living with it usually grow up with normal intelligence.

Well done PJ! Please share this beautiful moment to help put a smile on the faces of as many people as possible today.