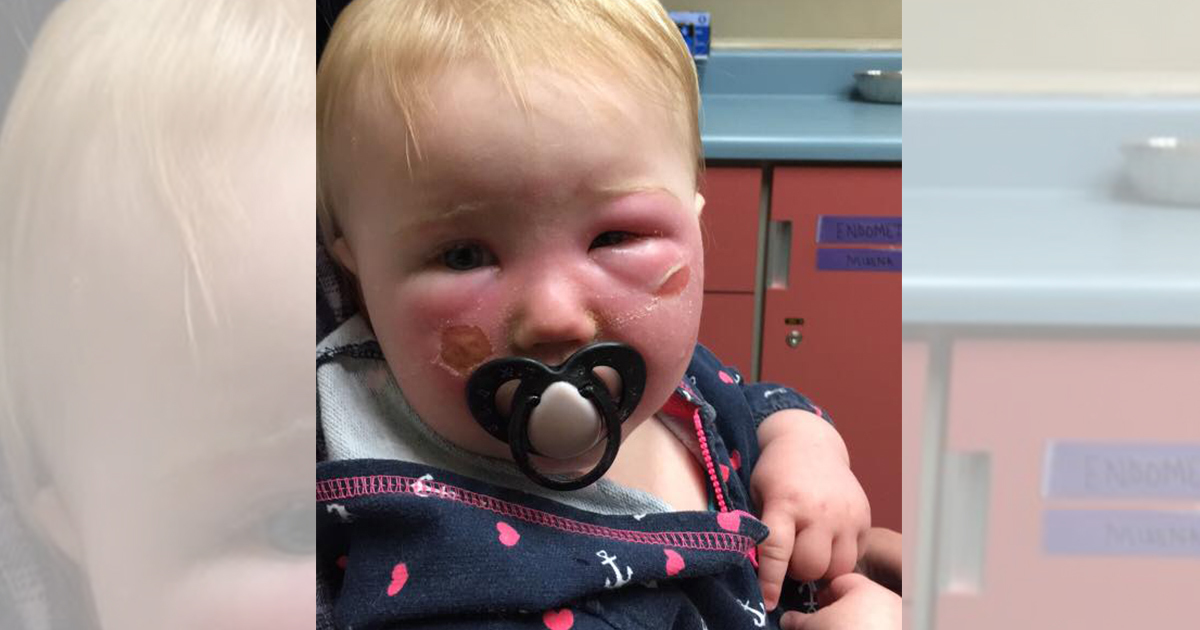 Sunscreen is very important when you’re going to the beach and is out under the hot sun.

And even when it’s cloudy, sunblock of some kind is important, especially for young kids and toddlers.

It doesn’t take long for the sun to burn sensitive skin, so use it even if you’re just going outside for a few minutes and never underestimate the strength and danger of sun exposure.

Of course, mom Rebecca Cannon thought her one-year-old daughter was protected when the two of them spent a day in the sun.

She had lathered SPF50 sunblock on her daughter, but when the toddler’s skin turned red and started peeling, Rebecca realized it wasn’t the sun that she needed to worry about.

And now she wants to warn others.

It was a pretty hot day in Newfoundland, Canada, when Rebecca Cannon borrowed some sunscreen spray from her sister to use for Kyla.

Rebecca put sunblock on her daughter’s face before going outside and enjoying a nice day together. But it wasn’t until the next morning that her daughter’s started to burn.

As you can see in the picture, her daughter Kyla’s face swelled up. She got burned and had big blisters on her cheeks. This despite the fact that the toddler barely spent any time out in the sun that day.

“As the day went on, she got a little redder and redder and the next morning she woke up and was swollen. She was bright red. There were blisters starting to pop up,” says Rebecca.

Hurriedly, Rebecca took her daughter to a hospital emergency room, the doctor confirmed that the girl had second degree chemical burns.

Rebecca couldn’t help to be perplexed by this revelation, as no one in the family had any signs of sunburns at all.

A dermatologist was quick to uncover the likely truth behind the situation.

The sunblock was found to be the cause, and the doctor told Rebecca that it was also possible that the burns were a severe allergic reaction to the sunblock, meaning there may have been some kind of dangerous chemical in it.

Gratefully, despite the shocking burns, Kyla will likely not deal with long-term issues and also does not seem to have any scarring.

Rebecca wrote about the event on Facebook in the hope that she can save other children from being burned. Read it here:

Rebecca decided to reach out to the company and issue a complaint regarding the ill effects of their sunscreen.

However, a wide range of different examinations did not show any reason to be concerned with the sunscreen products.

Unfortunately, for Kyla, this was probably more of a freak incident than one that implicates the manufacturers. It’s likely that Kyla had a severe allergic reaction.

Today she’s doing fine but I think it’s important to get this story and information out there, so this doesn’t happen to any child again.

To find out which sunblocks are safe, visit the Enviromental Working Group list of the best and worst sun protection for children.

Babies and young children – and even adults – can have surprising allergic reactions or very sensitive skin, so testing before full coverage use is always a good idea.

In America, most products for personal care are unregulated, for the most part, with the last relevant law passing way back in 1938, so patch testing is all the more crucial!

Not all sunscreens are reliable, so you be sure to consult your doctor about which one is best for your child.

Please share this to spread awareness and to warn others so that no more children are affected.