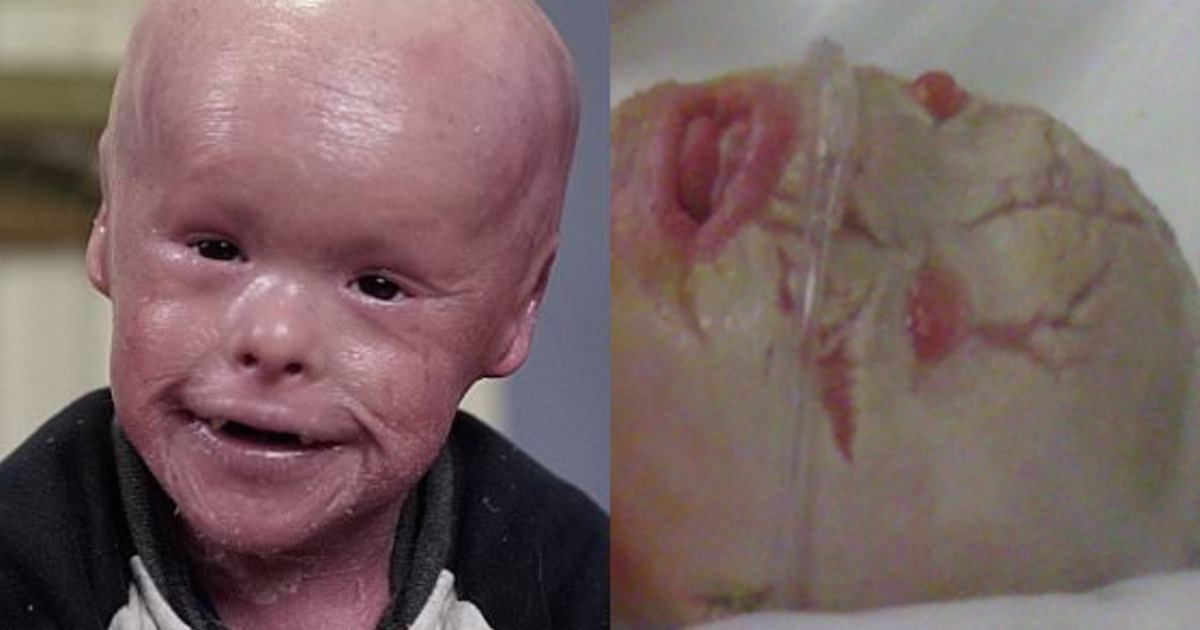 When little Evan Fasciano’s parents welcomed their son into the world six years ago, they were shocked. Their boy didn’t look like most infants. His little body was covered by a thick layer of skin full of cracks and his eyes were clogged with crusts, which meant that he couldn’t open them for several weeks. For over two months, Evan struggled for his life in intensive care. Doctors warned the family to prepare to say goodbye. Evan was born with  Harlequin Ichthyosis,  an incurable and usually fatal genetic skin disease which causes the skin to grow about 14 times faster than normal. The disease is very rare and unfortunately most affected children die a few days after birth, due to dehydration or infections. As you can imagine, the situation was grim for Evan. But this little fighter would prove to be stronger than anyone could have expected, and his journey has now inspired millions around the world. Read through this little champion’s moving story – about a family who never gave up, and a son that proved the strength of the human spirit. Please note strong images below.

When Evan was born June 9, 2010 he was nine weeks premature. Just two days before his birth, doctors informed his parents that he had Harlequin Ichthyosis, a fatal genetic skin disease which causes the skin to grow 14 times faster than normal.

The doctors advised the parents to prepare for the worst, as children with Harlequin Ichthyosis tend to only survive for a few days after birth.

Fortunately, there were good doctors at Yale Hospital where Evan was born, who specialize in skin diseases. Evan had to stay in hospital for 58 days and was treated in the ICU. Few believed he would even survive the first few days, but there was a reason they decided to name him Evan. Evan is a Celtic name meaning “Little Warrior”.

“Whenever we went into his room, I always made sure we stayed positive and ‘in good spirits’ so Evan could feel those positive emotions,” mother Dede wrote on her blog, which she runs to raise awareness of Harlequin Ichthyosis.

Eventually Evan’s condition improved more and more. He made progress every day and eventually could be released from hospital and begin a normal life in their Connecticut home. Once there, the next chapter in the family’s journey began, with Evan requiring around the clock care.

Due to his condition, he needs to be bathed twice a day, 1 hour each time, to help moisturize his skin and remove a large amount of dead skin- both symptoms of his disease. Evan needs to be thoroughly moisturized with a gel that prevents fractures and infections of the skin. It’s a lot of work, but despite it, Evan’s spirits are always high, and the boy displays exemplary behavior throughout all challenges.

With his strict treatment schedule, many precautions must also be taken. His parents must daily keep track of his body temperature, sodium levels, calorie and fluid intake. As Evan can’t regulate his own body temperature (he can’t sweat), he loses a lot of fluid, which can easily lead to dehydration and he burns excessive amounts of calories.

Despite this, Evan has had an uplifting and cheerful personality since birth. He shows great patience and gets through the most difficult of challenges for a 6-year-old with a big smile on his face, according to the family.

It’s very rare that people with this form of extreme skin disease survive longer than a month. But Evan recently celebrated his 6th birthday, when members of their community gathered to celebrate along his side, including firemen from the local fire department and who brought him gifts.

Evan is in many ways like all other children at his age. He’s curious, talks a lot and loves to go to preschool. It’s a little harder for him to get around than his peers, as his motor functions are a bit rusty due to his skin disease. But he makes his way with his walker and gets a lot of encouragement from his service dog Crane.

And when Evan’s brother Vincenzo learned to walk at 19 months, Evan was not the least bit jealous – he was rather very happy and proud of his brother!

Dede has attended Evan’s classroom on a few occasions to teach the kids a little bit about Evan’s disease and why he looks different. Evan’s classmates just adore him and treat him just like everyone else – Evan is in fact known as the little “rockstar” among his peers.

Unfortunately, however, it does happen that strangers stare or make negative comments about his appearance. Some have even told Dede that she should let Evan die, because it’s cruel to the son that he has to live with a deadly and difficult disease.

The family tries not to shift focus to the positive: they’re incredibly proud their little miracle and love Evan to death. They know how bravely he fights every day. Who could ever wish such a lovable boy anything bad?

Although the risk of infection is always high, Evan’s parents try to give him as normal a life as possible. They want him to be able to experiment life as a normal 6-year-old and have no intention to keep him away from other children.

There are only two recent documented cases of people with Harlequin Ichthyosis who have survived to adulthood. No one knows for sure how the future looks for Evan, but he has already proved that he can defy all odds.

We keep our fingers crossed for this little hero and hope that Evan continues to live life to the fullest and spread his wonderful spirit for many years to come!

Watch the video below for more on Evan and his amazing journey.

Please share Evan’s inspiring spark of life with everyone you know on Facebook, so that more people have the chance to pay tribute to this strong family!