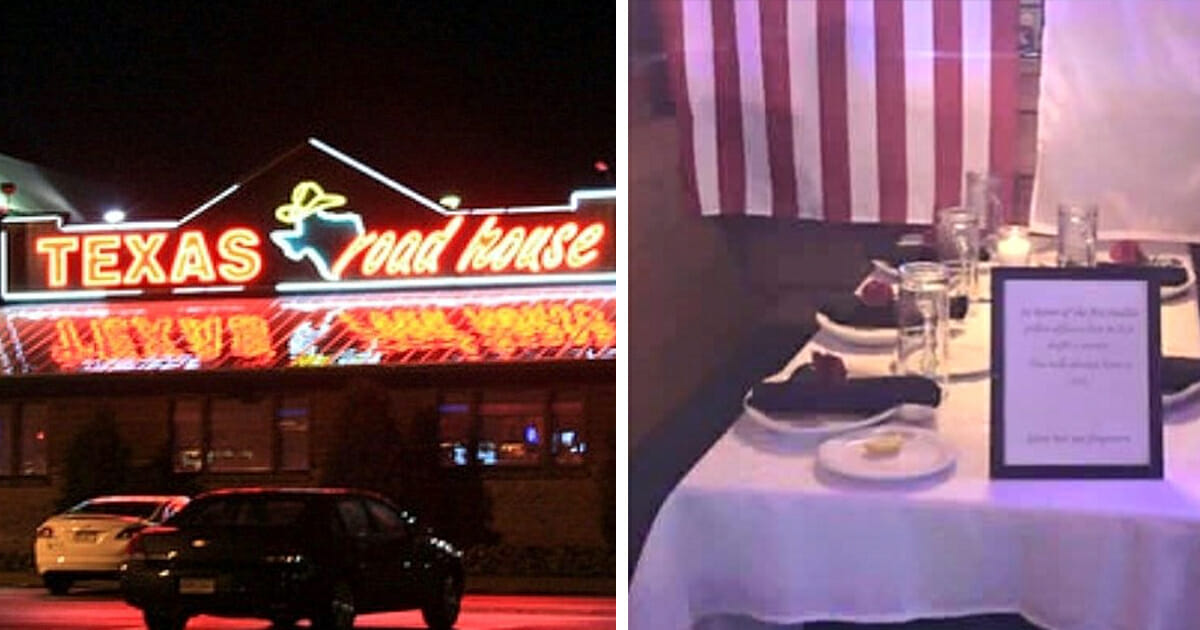 Ever been in a restaurant where the host/hostess sits you in an uncomfortable seat when there seems to be better alternatives?

Of course, most of the time, if you’re denied a booth or large table in a restaurant upon asking, it’s usually for a good reason. That doesn’t make it any less frustrating though.

When one family walked into a Texas Roadhouse in Dallas, Texas, they were confused as to why they weren’t allowed to sit in what looked to be an empty booth. On closer inspection, they realized it was being saved for a group of VIP’s, and so quietly settled down and forgot about it …

The booth itself was arranged as though an important person could be arriving at any moment. The American flag and Texas state flag were hanging from the wall behind the booth, and there was a special sign placed on the tabletop to let others know who the table was reserved for.

It wasn’t people took a closer look, however, that they realized it was no ordinary group of five souls set to occupy the booth. In fact, it wasn’t five people at all … not those who could walk through the door, in any case.

No, instead, the Texas Roadhouse had reserved the booth for five slain police officers who had been ambushed by multiple snipers in Dallas. It was the restaurant’s way of acknowledging the sacrifice, and honoring the brave actions of a special group of people.

When the other customers came to the realization, there was barely a dry eye in the restaurant.

The note read: “We remember and honor the five slain police officers, Sergeant Michael J. Smith, Officer Michael Krol, Officer Patrick Zamarripa, Senior Corporal Lorne Ahrens, and Mr. Brent Thompson, who worked for the Dallas Area Rapid Transit Police Department, that the Texas Roadhouse restaurant reserved a table for. We thank you for your service. May you rest in peace.”

We think the gesture from Texas Roadhouse is too special to go without praise. Let’s hear it for all the servicemen and women who put their lives in danger’s way every day so the rest of us can be safe.

Share this article if you support our boys in blue!