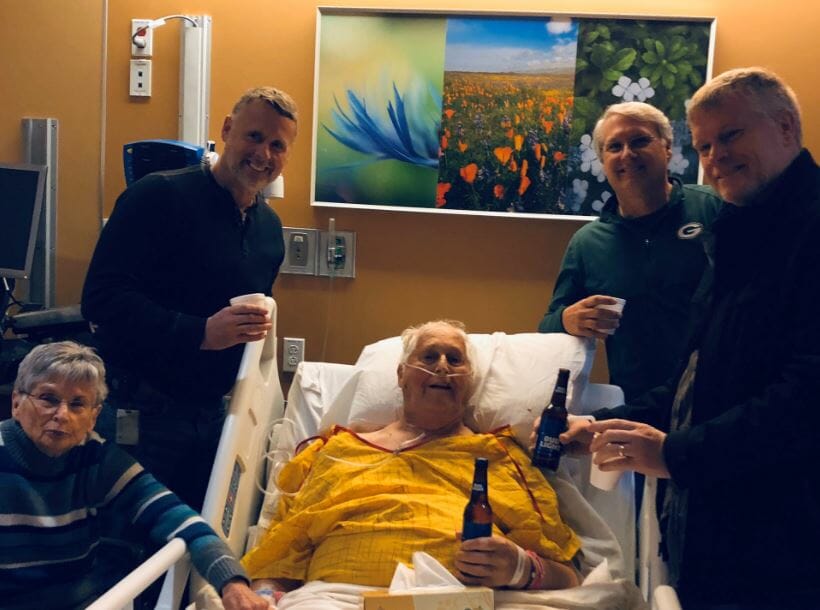 It’s a bitterly sad truth, the fact almost all of us have been touched by cancer in one form or another.

Whether that be by fighting a person battle with the disease or seeing a loved one struggle in its embrace; it’s a truly terrible affliction.

Some are lucky enough to pull through such fights, others fall victim no matter how hard they wage their war. Unfortunately, Norbert Schemm falls into the latter category.

The dad and grandpa had given it all he had, but with cancer winning the battle he knew it was time to turn his attentions to what he wanted to do before he passed.

As it happens, his last request was a simple one: to share a beer with his sons.

And that’s exactly what the champion did. A photo was taken by one of Norbert’s grandsons depicting Norbert surrounded by his three sons … all of them equipped with a nice cold one to mark the occasion.

It’s reported the group revisited old memories as they supped the good stuff, sharing what would turn out to be Norbert’s final beer.

The very next night Norbert passed away, but his legacy will certainly live on in his sons and grandsons. After the photo was uploaded to Twitter, it quickly gained viral attention. In fact, it’s had over 300,000 likes so far, as well as several thousand comments.

Rest in peace, Norbert, we hope that wherever you are now, your fridge is well stocked with the golden nectar.

Share this article to honor this beer lover’s memory, and to send a big f-you to cancer.