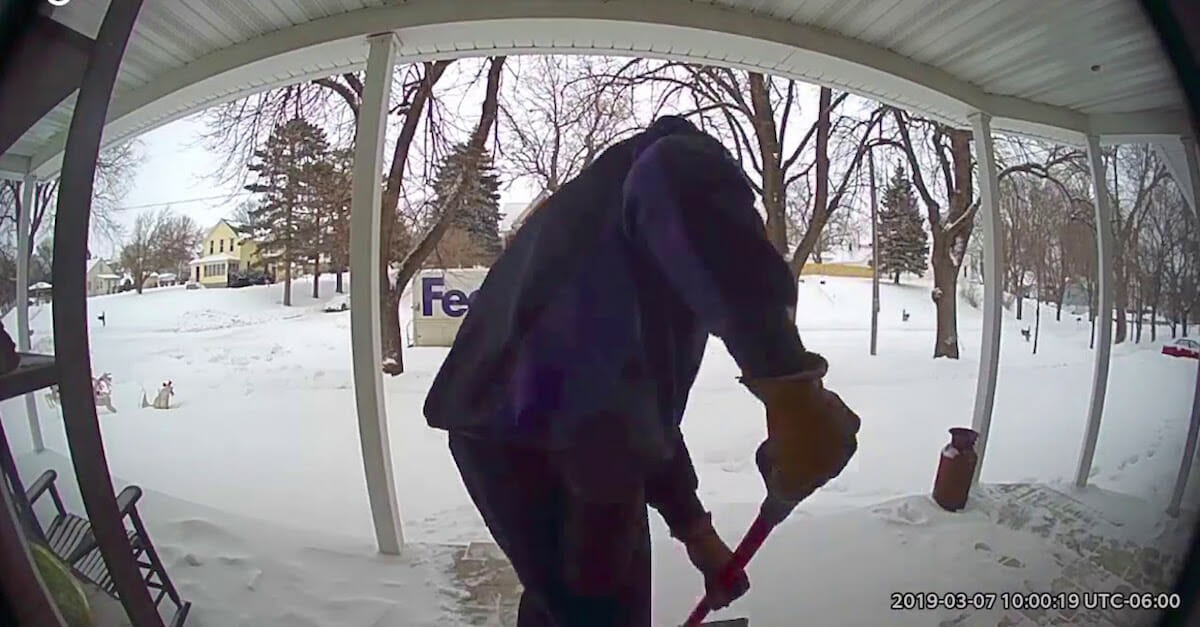 Losing a loved one is never an easy process to go through. At best it’s a heartbreaking, sorrowful affair that deeply affects the ones mourning the departed.

At worst, it can be a life-changing, crippling, battle. Such was the case for Leigh Anne, whose husband passed away aged 42 after a seven-month battle with cancer.

The mother-of-three lives in a small Nebraskan town, and as such has to deal with snowstorms at intervals throughout the year.

It was after one such storm that she found her porch covered in snow. It was what her Ring video doorbell captured, however, that would truly turn her cold with shock …

It was in the aftermath of a snowstorm that Leigh Anne first spotted a FedEx truck parked on her street. At the time, she was struggling to put air back into her tires, with the cap proving difficult to remove.

She recognized the FedEx driver, Brian, from his usual route throughout her neighborhood, and asked if he could assist. Brian was all too happy to oblige.

The pair got talking as Brian worked, and it was then that he learned of the tragic situation involving her deceased husband.

Leigh Anne was facing the prospect of raising and taking care of three young children, as well as having to deal with the grief that accompanies someone you love passing on.

Suffice to say, fighting a battle against the snow accumulated in front of her house was something Leigh Anne could have done without.

Fortunately Brian instantly recognized this, and without asking he took it upon himself to help her out in a big way.

Brian is the man

Little did he know that Leigh Anne’s Ring doorbell was going to catch him in the act of clearing the snow from her porch!

Watch Brian’s act of unsolicited kindness in the video below:

There’s nothing Brian can do to bring Leigh Anne’s husband back, nor anything much he can do to heal the pain of a broken heart.

Even so, his act of kindness can be seen as setting a brilliant example of what one can do in such situations.

It’s tiny acts of compassion that can often go so much further than people realize, especially when the benefactors are at a turning point in their lives.

Share this article if you think Brian’s selfless actions should be put under the spotlight of positivity!