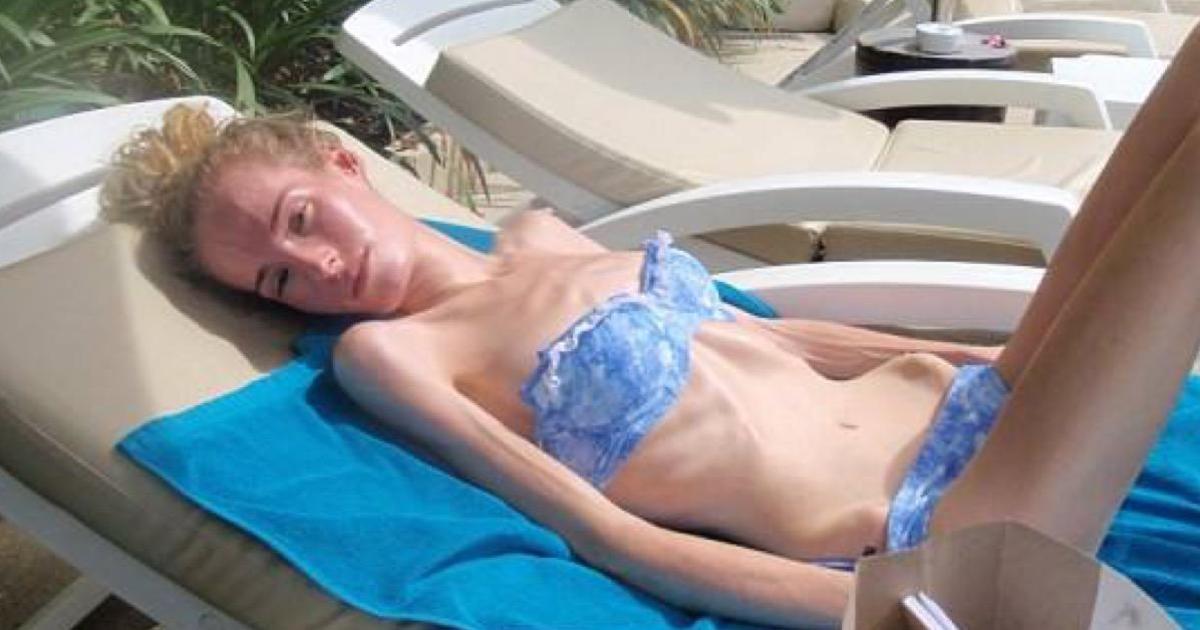 Unfortunately, statistics show that eating disorders are still prevalent among women in particular around the world. Exactly how many individuals are affected is anyone’s guess, since numerous sufferers do not seek help and are thus unaccounted for.

But if you’re close to someone suffering from an eating disorder – you are most likely sooner or later going to realize. And when someone you love is suffering from such a problem, it can be very difficult.

Australian teen Gemma Walker suffered from anorexia for many years. Her parents watched helplessly as their daughter’s body withered, caught by the evil grip of anorexia.

At some point, things got so bad that Gemma’s father, Steve, was sneaking into his daughter’s room every morning to make sure she was still breathing.

“Some nights we would just sit on the floor by her bed, just to be with her, there was nothing else we could do,” says Steve.

When Gemma turned 14, she weighed just 61 lbs. Her parents, who had long realized the seriousness of her illness, finally drove her to the hospital.

The doctors’ diagnosis was clear: If her condition did not immediately change, her life would be threatened. The doctors even predicted she only had 48 hours to live.

‘I felt numb, the days just melted into each other and I wished each day by, hoping that I would just pass peacefully in my sleep. My family and I were ready to let me pass,” Gemma told the British Daily Mail.

But the angels were not quite ready to get Gemma yet. She instead remained in hospital for a few weeks.

And there would be many more emergency room visits during the seven years that Gemma was to wrestle against her eating disorders. Twice, she was also admitted to the psychiatric ward.

Still, she refused to eat.

She tried to fool doctors about her weight by concealing weights under her clothes as she stood on the scale. And soon, another classic outcome of anorexia occurred: Gemma began slitting her wrists. She wanted to end her life.

Her father recalls those difficult years with great pain:

But ultimately, something gave – at least that was what the family believed.

Gemma began to eat again, but it soon became apparent that she had opted for the opposite extreme. She began to binge eat – at times consuming 6,500 calories in just 20 minutes – then induce vomiting.

She went from not eating anything at all – to bulimia.

“My recovery was very traumatic,” she said.

At first, people thought that Gemma was improving since she had gained some weight and appeared healthier.

But her bulimia lasted nearly 18 months. Gemma went from obsessive and strict restrictions to complete loss of control.

During that time, her weight tripled. But slowly, with the help of her loved ones, she managed to take real steps towards a healthy life.

Early on, Gemma’s father had suggested that she write a goodbye letter to her anorexia.

For six years Gemma’s letter stayed tucked away in a drawer, until at last, she was finally ready to let go.

In addition to the massive support she received from her family, Gemma attributes her healing to her boyfriend, who she says supported her through it all:

“My partner has been an incredible support and is honestly the reason why I’m still alive,” she says.

Gemma has now gotten her spark of life back and says she has put the disease behind her. She is at last taking her first steps towards a new healthier chapter of life.

‘I am the happiest I’ve ever been now, it’s such an amazing, surreal feeling,” she says.

To celebrate that six months passed since she began her new life, she posted some pictures of herself online, revealing her incredible transformation.

A great way to reinforce her confidence, but also to show others in similar situations that there is always a way out.

Gemma has also launched her own skin care brand. With her newfound energy, Gemma discovered that she wanted to start her own business and is now hoping to pursue a career in the cosmetics industry.

Just by looking at the before and after pictures, you understand the tough fight that Gemma battled against.

It’s terrible that it went so far – but her trip is also a clear example of the determination we have within us – that it is possible to change things.

Now Gemma is an inspiration to others who are still struggling to free themselves from eating disorder’s terrible grip – and she is doing it with pride.

Please share Gemma’s story if you agree her fight was inspiring and deserves to be spread further!