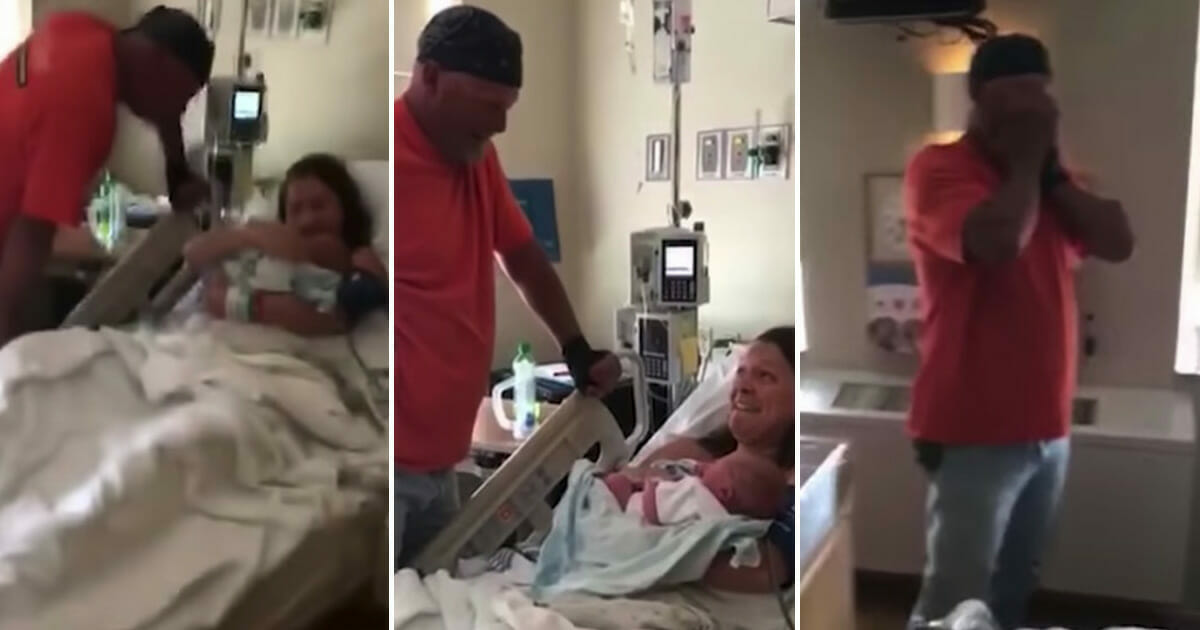 Landry James has always been surrounded by women. By now, he’s used to being the only man in the family.

He has two sisters, four daughters and two granddaughters.

If nothing else, it’s made him a patient and caring man, though it does have its downsides; Landry had grown tired of being the only man in the family.

Little did he know how things would change, and in a most amusing way …

When one of his daughters, Carie Elbe, found out she was pregnant with a boy, she decided to keep a major part of it a secret from her father. It was Carie’s aim to give him a surprise he wouldn’t forget in a hurry.

When the due date arrived, the whole family was in attendance to witness the birth.

Almost no one knew about the sex and when the day came they were taught with excitement, especially so in Landry’s case.

But no one could have predicted just how overwhelmed Landry would be when he found there was finally going to be another man in the family.

You see, Carie had been rather mean to her father during her pregnancy. Though they had told people they were keeping the sex a secret, she’d let on that the baby was a girl so as to heighten Landry’s surprise.

To top it all off, the newest family member decided to arrive on Landry’s birthday! No one revealed anything about the sex, until the time was just right …

And the moment Landry found out it was a boy? Well, he didn’t quite know what to do.

To make Landry’s birthday even more special, his daughter decided to name her son after his grandfather. He was named Landry James (the II). What a tribute!

It’s great that someone filmed the moment the truth came out. Watch the video below to see how Landry reacted:

Witnessing the first few days of a new life is truly an amazing thing. Though sex should obviously never play a major role in happiness – we’re sure he would be equally happy with another granddaughter – it’s easy to understand Landry’s happiness at finally welcoming a boy.

Share this article with friends on Facebook if you also think that grandkids are one of the most joyous gifts in life!