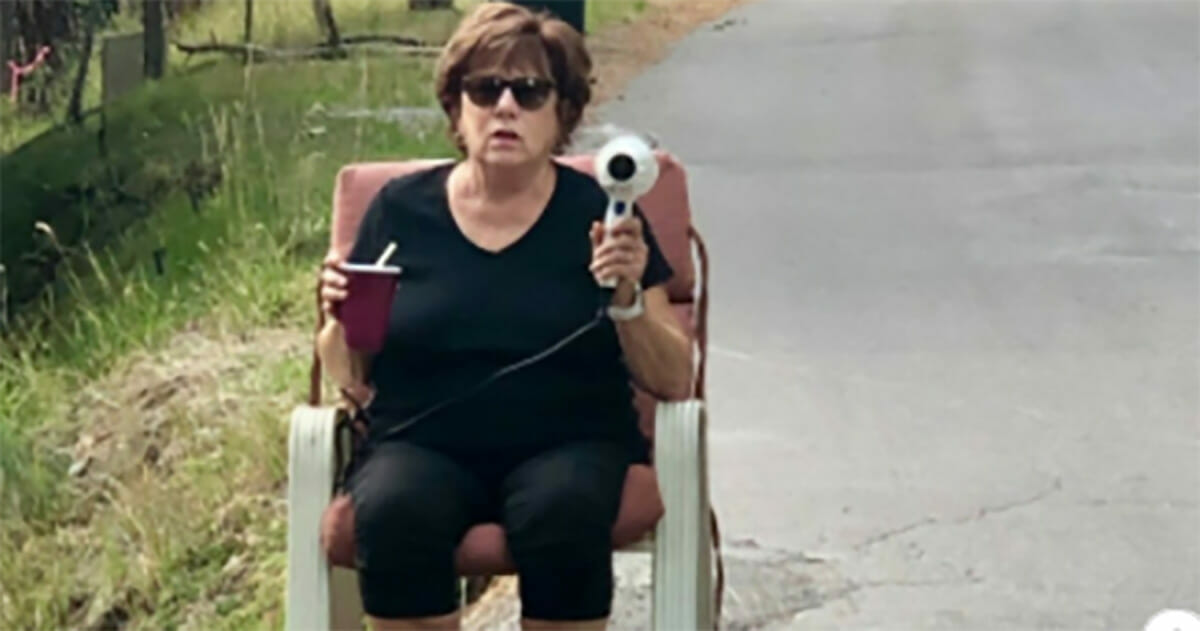 Speeding drivers are a common problem and often don’t stop to think about the effect their driving is having on the neighborhoods they speed through.

In South Finley Point, in Polson, Montana, speeding drivers were becoming such an issue that they were stopping residents from walking or riding their bikes.

One woman decided to do something about it. Armed with just a hair dryer and a cold beverage Patti Baumgartner decided to teach these speeding motorists a lesson.

Her method was so successful she was given the title of Honorary Trooper and now her story has been shared across the nation.

Patti Baumgartner decided to trick drivers into thinking she was holding a radar speed gun after months of dangerous drivers passing though her neighborhood.

“There are a lot of people that are complaining that they can’t walk or ride their bikes,” Patti told KPAX.

“I wouldn’t even attempt riding a bike around.”

This Lady is helping @TrooperPesola slow drivers down on Finley Point. She’s running radar with her #SoloCup #FinleyPoint #SlowDown pic.twitter.com/zicvdRpCyc

With help from her son Tim the two hatched a plan that stopped drivers in their tracks.

“We were talking about maybe something that would slow the cars down,” she added. “So, we decided to put me in a chair, and I guess use the hair dryer as a speed thing.”

Her son took a picture of his mom in action and tweeted it out to Montana State Highway Patrol Trooper Noah Pesola.

“I thought it was hilarious,” Officer Pesola told KPAX. “I think that we have a speed issue in Montana, and I thought it was a great creative idea for the public to try and combat that a little bit without making people too upset.”

I was able to find Ms. Patti.

She was made an honorary Trooper with a campaign hat and sticker badge for her work to keep her grandkids safe. #SlowDown#KidsCrossing#KeepOurKidsSafe https://t.co/M2EYlDQlku pic.twitter.com/eaAh4s1It2

Officer Pesola retweeted the photo of Patti and it went viral. He even tracked down the one-woman speed fighter and gave her the title of “Honorary Trooper.”

“She’s got grandkids in the area, so she’s doing something for her grandkids’ benefit,” Officer Pesola said, according to Cafe Mom.

“The best thing I could think of was give her a trooper hat and a badge to make her look a little more official.” Somehow, I don’t think this is the last we’ll be seeing of this determined lady with her hair dryer.

Please share to show your support for Patti and her fight against speeding motorists.