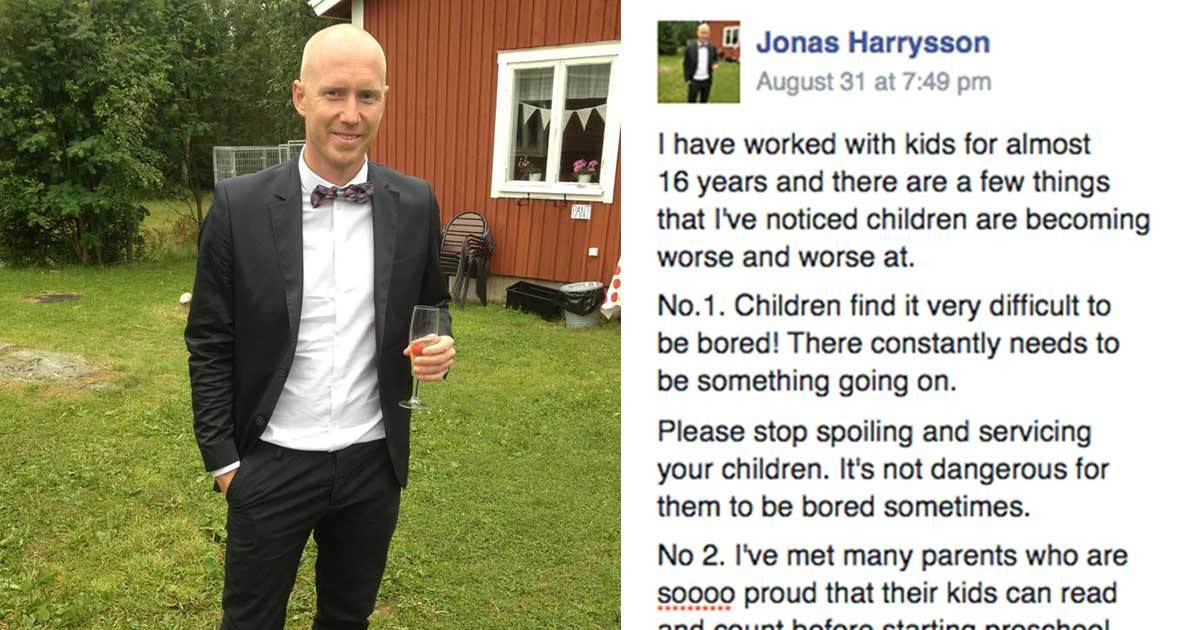 Jonas Harrysson has worked at a school for close to 16 years. During this time, he’s noticed a stark difference in the way young parents are raising their children. And he believes that the tendency is clear: today’s parents are spoiling and servicing their children, to the extent that kids must always be entertained and can never be ‘bored’. Jonas expressed his thoughts in a Facebook post in which he highlighted three major areas he’d like to see parents change the way they raise their kids. In just two days, the post has been shared by close to thousands. You can read it below, and decide for yourself whether you agree with him or not.

I have worked with kids for almost 16 years and there are several things that I’ve noticed children getting worse and worse at.

No.1. Children find it very difficult to be bored! There constantly needs to be something going on.
Please stop spoiling and servicing your children. It’s not dangerous for them to be bored sometimes.

No 2. I’ve met many parents who are soooo proud that their kids can read and count before starting preschool.
Well, I hate to break it to you, but reading and counting, they’ll learn to do soon enough. Teach them instead to play, to be a good friend, and to share.

My third point is that many children find it difficult to show gratitude, both to other kids and towards adults. Can they get an “another one” is unfortunately often a first question – and “we only get one!?” is a common complaint I hear.
What happened to PLEASE!? And thanks for dinner, and thanks for the ride, and so on?

I have no children at the moment, but if I do sometime in the future I plan to teach them to play, to be good friends, to show gratitude and to be bored from time to time. Once they’ve learned those things, then I’ll teach them to read and count:)

After his post went viral, Jonas was interviewed by a local paper. He told them that he believes that spoiling children has quite the opposite effect that parents hope for.

“By spoiling them, we’re doing them a disservice. Children have loads of imagination and we mustn’t destroy it by constantly feeding them with ideas of things to do. They can playing cowboy and Indian with just a stick and a leaf,” he told the paper.