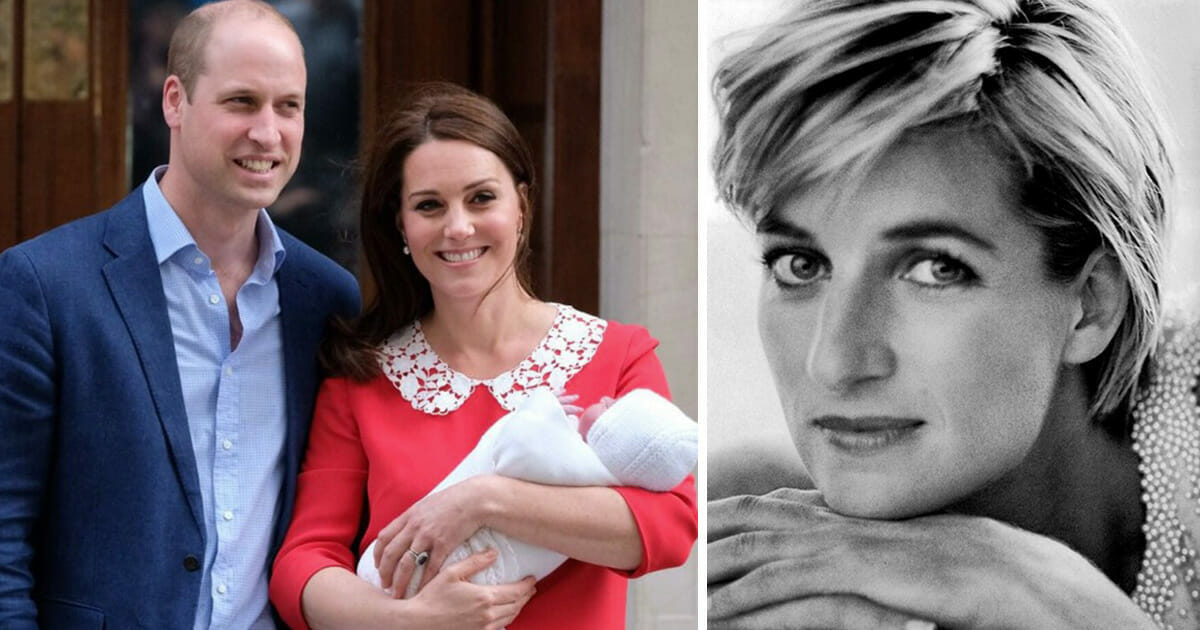 Prince William and Kate Middleton, Duchess of Cambridge, welcomed their third baby into the world yesterday.

It was announced that another prince joined the line of succession at 11:01am local time, before later on Monday evening William and Kate appeared in front of cameras to show their baby for the first time.

For some, it didn’t go unnoticed that Kate may have chosen to honor William’s late mother, the dearly beloved Diana, Princess of Wales, with a rather fitting tribute…

It was shortly before Monday lunchtime that Prince William and Kate Middleton welcomed their second son. They already have Prince George, 4, and Princess Charlotte, 2, though a name hasn’t yet been chosen for their third child.

On Monday evening, the two proud parents emerged from St. Mary’s Hospital, London, with the new prince wrapped in his mother’s arms.

Sadly, one woman who will never get to see her grandchildren is Princess Diana. The mother to Princes William and his younger brother, Prince Harry, infamously died in a car accident in Paris in 1997.

In the documentary film Diana, Our Mother: Her Life and Legacy, William explained how he talks to his children about his mother.

“I think constantly about Granny Diana,” he said, as per the Daily Mail. “So we’ve got more photos up around the house now…”

Though his wife, Kate, never knew Diana, William said he usually tells his children about her. “It’s hard because Catherine didn’t know her, so cannot provide that level of detail,” he explained, before continuing: “There were two grandmothers in their lives so it’s important that they know who she was.”

William on Diana as a grandmother

William also shared his thoughts on what Diana would have been like as a grandmother … and they’re refreshingly honest.

“She’d be an absolute nightmare grandmother, absolute nightmare. She’d love the children to bits, but she’d come in probably at bath time, cause an amazing scene with bubbles absolutely everywhere and bath water all over the place, then just leave!”

June 12, 1984 Princess Diana plays with two year old Prince William in the garden of Kensington Palace, during a press photo call to mark the occasion of his second birthdaDiana, Princess of Wales 1961-1997

Prince William and Kate arrived at St. Mary’s on Monday morning, ready to deliver their third child. Just before lunch, a new prince was born, and later in the afternoon Prince George and Princess Charlotte met their little brother for the first time.

There had been fears over Kate’s health, with the Daily Mirror reporting that she was suffering from hyperemesis gravidarum – a rare form of morning sickness. However, all went as planned during the birth and Kate appeared before cameras looking healthy and well.

The prince is the sixth great grandchild of Queen Elizabeth and enters the line of succession fifth behind his sister, Princess Charlotte.

According to Cosmopolitan, Kate Middleton honoured Princess Diana’s memory by the clothes she decided to wear post-pregnancy.

Kate is famous for her fashion sense, just as Diana was before her tragic death in 1997.

If you have a closer look at Kate’s choice of outfit, you can appreciate that it’s extremely similar to what another princess wore after giving birth herself:

Welcome to the family. pic.twitter.com/nKSd5kh5bZ

There are certainly similarities there, not least the red coat with the white collar.

Was it a conscious tribute to Princess Diana? We don’t know for sure, but it’s likely it is!

Help us pay tribute to the royal family by sharing this article!

1997 A portrait of Princess Diana captured by celebrity photographer Mario Testino, during a photo session for Vanity…