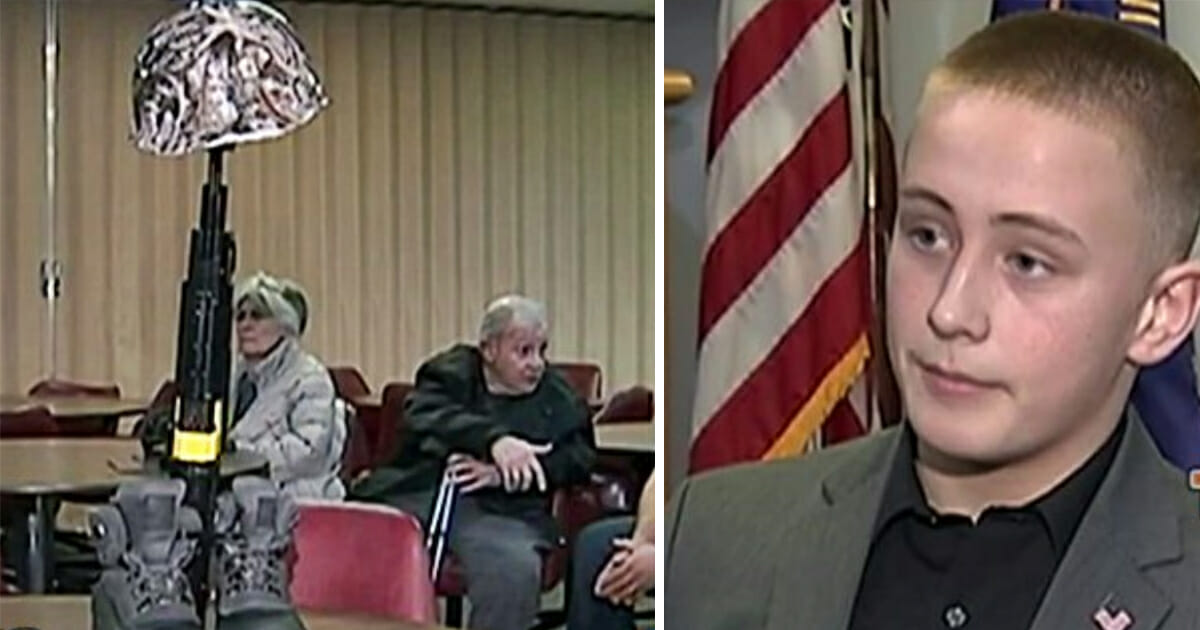 When it comes to honoring our nation’s fallen soldiers, in my mind there can be no monument too big, no tribute too engaging.

After all, these people have given their very lives for the liberties and freedoms we enjoy on a daily basis, and to ignore that fact is frankly despicable.

Tyler Carlin understands this all too well. When he was asked to create a physical representation for his history class at Celina Middle School, he decided he would dedicate it to all the soldiers who have died in service to their country.

He spent a long time constructing his model, and the result was a proud reflection of hard work and careful planning.

Sadly, it didn’t get the response Tyler might have been expecting …

Cleverly assembling a nerf gun, boots and a helmet, Tyler was able to recreate a replica of the “battle cross” monument.

Unfortunately, not everyone received Tyler’s tribute as he perhaps expected them to. The 13-year-old was hauled into the principal’s office as soon as he’d entered the school, and thereafter handed a 3-day in-school suspension for – as per The Todd Starnes Show – “bringing a look-alike weapon to school and creating a disturbance.”

Despite his history teacher pre-approving the project, Tyler was stopped by a school official shortly after arriving at school and instructed to leave his replica in the administration office. He was then told that he could give the presentation he had planned without the replica.

Speaking to FOX News, Tyler said: “This means so much to me because that was the last chance that… the military, their friends got to say goodby to them and then they had to go back out and fight. Also, my dad’s friend is like a grandpa to me. And he, like, showed me his war stories from Vietnam… he just showed me all about that.”

It didn’t take long before word of Tyler’s punishment spread. The backlash at the school was fierce, with other students rallying to protest the treatment of their classmate.

“The community is standing behind me on this,” Carlin explained. “They held a protest.”

Unsurprisingly, Tyler’s parents were none too happy either. Though the school changed the boy’s charge from bringing in a fake weapon and causing disturbance to “insubordination”, the family’s attorney confirmed Tyler and his parents are going to fight the charge on record.

What’s more, as Tyler’s story has spread, more and more people have come out in support of his position. Still, the school district stands in opposition, and are unwilling to remove the suspension and charge from Tyler’s record!

Of course, any school should take the utmost caution when it comes to students bringing in weapons or weapon replicas, but in this case the project had been pre-approved by Tyler’s history teacher. What’s more, his project was a poignant reflection on something that clearly means a great deal to a lot of people.

What do you think? Are the school right to punish him? Should the suspension be wiped from his record? Let us know in the comments box below.

Share this article if you stand in support of showing respect for all troops!