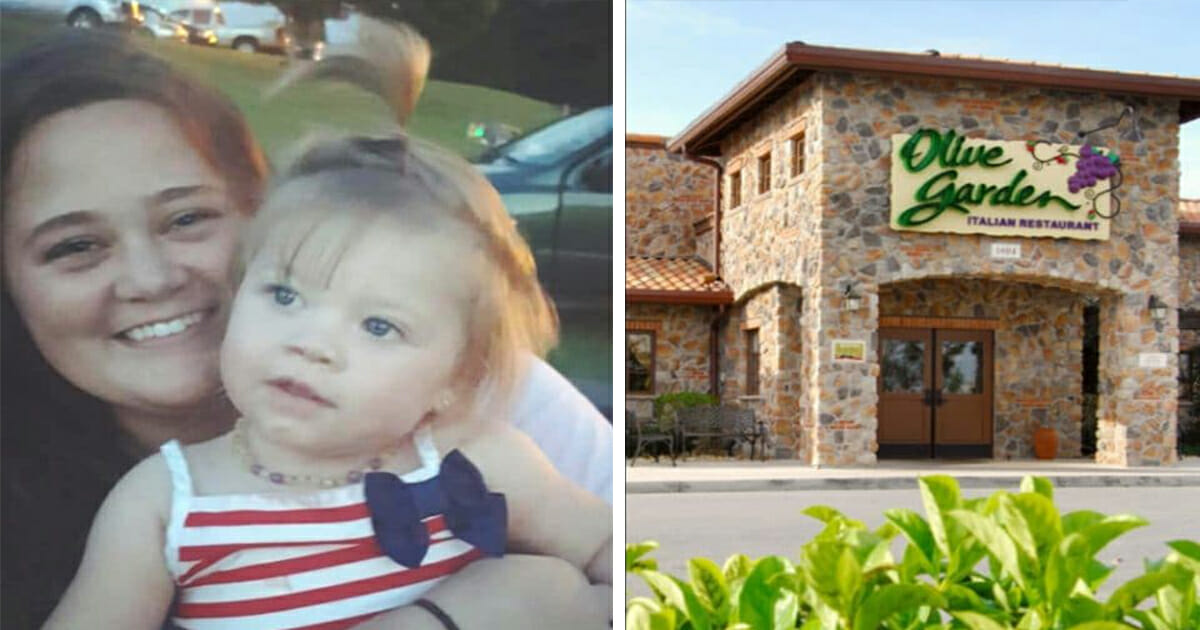 Babies will be babies, no matter the circumstances or situation. If you’ve ever had a baby, or indeed have one now, you’ll know exactly what I’m talking about.

I can’t tell you how many times my own children left me stricken with embarrassment in public places. At the end of the day, though, you have to suck it up, get on with your life and accept it for what it is. After all, your little ones don’t really know exactly what they’re doing. Every moment is a learning experience for them; every tantrum or action a way of communicating with you.

Courtney Pedigo knows a thing or two about being put in an awkward situation by her baby. She wanted to enjoy a nice meal with her family at a restaurant named Olive Garden, but her 18-month-old daughter, Harlynn, had other ideas.

The youngster did her best to wiggle away, wanting to run free around the restaurant. It got to the point where the exasperated Courtney decided to throw in the towel; she would take Harlynn to the car to finish their meals, while her father, stepmother, and some of her parents’ friends continued eating in the restaurant.

However, when she flagged down a waitress and asked for a to-go box, she was handed a surprising answer … No.

It was 22-year-old Nianni Rudder who attended Courtney when she needed assistance. After being asked for a to-go box, so that Courtney could finish her meal with her daughter outside, however, Nianni refused.

“She really said NO,” Courtney said.

Courtney was shocked. Well, that was right up until the moment Nianni continued and revealed her true intention.

As per reports, Nianni replied: “You’re going to go sit down and enjoy your dinner and I will be there to sit with her!”

The waitress then proceeded to sit down with Harlynn, feeding her caramel ice cream whilst Courtney finished her meal in peace. The mom was so touched by the random act of kindness from a stranger, that she shared her experience in a post on Facebook.

Tonight my family and I went out to Olive Garden for dinner, and per Harlynn’s usual she did everything but sit in her…

“Girl, you will never truly know how appreciative I am for tonight,” she wrote. “I seriously admire you, Not only because you took the time to bribe my bratty little human with sweets so I could eat but because you are so so strong! I know your Mom is looking down from Heaven with the BIGGEST smile and so incredibly proud of the woman you are.

“I aspire to be the go getter you are and like I told my dad on our way home it has to take someone with a strong heart and mind to do what you do bc I know I couldn’t!”

As for Nianni, she insists that the act was no big deal.

“I just didn’t want her to leave,” she explained to TODAY.

“She came out to enjoy a meal with her family, and she should be able to do that. I didn’t think she had to leave or go sit in the car to eat the food because her baby was fussy.

“They’re little kids,” she added, “that’s just what they do.”

It may be ‘what they do’, but that doesn’t mean Nianni didn’t go above and beyond where most people would have simply fetched a box. We think the world needs more people like this compassionate 22-year-old!

What do you think? Did this story put a smile on your face?

If it did, then help us pay tribute to the wonderful waitress. Share this article on Facebook to spread the love!