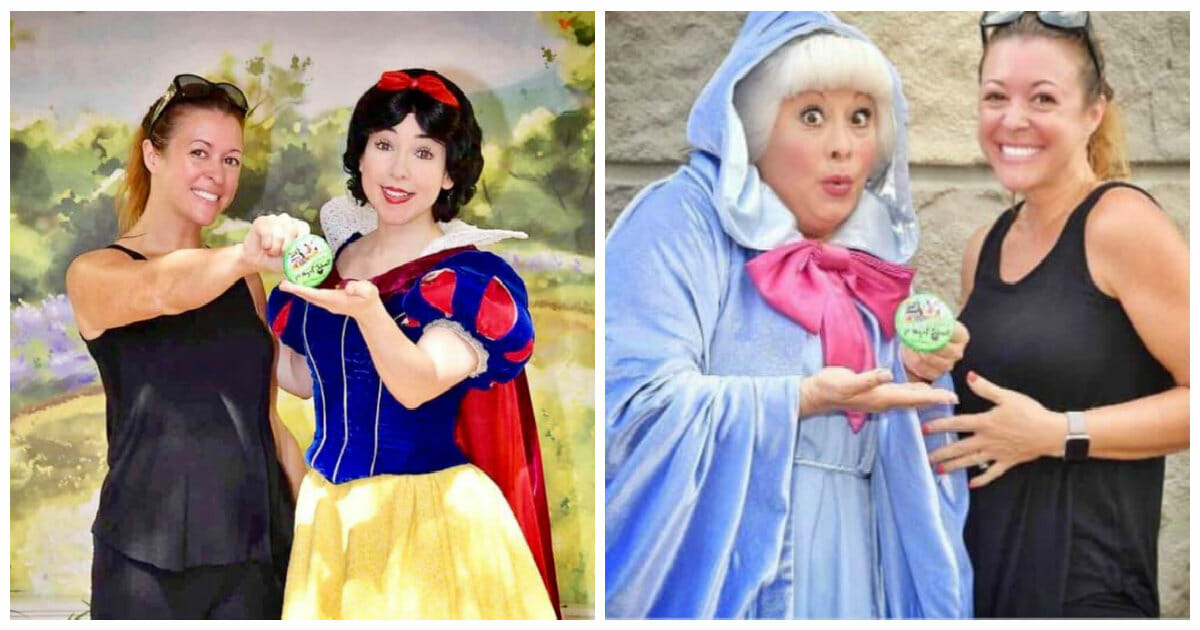 It’s that time of year again: The summer is winding down and schools are starting back up. After months of the kids being home, parents will soon have the eerily quiet house to themselves again.

There are always two kinds of parents on that first day: the kind that will miss the kids… and the kind that celebrate finally having some alone time.

There’s no shame in being in that second group. As one mom’s hilarious photoshoot proves, it’s okay to have some child-free time for yourself, and that when you’re an adult, summer fun never has to end.

A few years ago Lisa DiNoto, a mother of two, got a fresh new start. A Harvard Law School grad, she writes that she was a “slave to big law” until 2016, when she set out to “rewrite the life that called to [her].” She now co-owns a trucking company with her husband.

That included relocating to Florida—building a new home just north of the most magical place on earth, Disney World’s Magic Kingdom.

“You only live once so you might as well spend it listening to the train whistle and watching fireworks from the bedroom window,” Lisa wrote.

Confession: When I walked away from Big Law a couple of years ago with nothing more than a love for writing and Disney…

She now writes about her adventures in a blog called The Castle Run. It’s her most recent post that has made her a hero to exasperated parents everywhere.

With schools returning to session in Florida this month, Lisa recently dropped her two boys off for their first day. But then, she decided to do something fun: she headed to Disney World.

She even got herself one of the park’s celebration pins, writing that she was “celebrating the 1st day of school.”

“This, my friends. This is what you do after you drop your kids off on the first day of school,” she wrote in a blog post. “You get yourself a pin and you walk it around Magic Kingdom like some garden gnome on a world adventure.”

Lisa walked around the park, and her surprising mom’s day off adventure got the attention of the park staff.

“After I grabbed the pin, I saw some of the Citizens of Main Street U.S.A. out and about and had the idea to have them hold the pin. They got such a kick out of it that I just kept going,” she told Good Morning America.

She also took photos with the Disney characters like Snow White and Cinderella’s Fairy Godmother, who she writes cried with laughter at her story.

“She reached into her sleeve and pulled out a bag of pixie dust and handed it to me and said, ‘This is for you and only you. You use it today,'” Lisa said. “It was one of those moments of connection that is really what the parks are all about.”

There’s been a debate raging online about whether it’s unusual for people to visit Disney World without children (although the conversation is about “childless millennials” rather than parents leaving their kids at home) but that clearly didn’t phase Lisa at all.

In fact, rather than getting strange looks from strangers, she was the envy of all the child-rearing parents in the park.

“This sweet mom who was clearly very tired and in the midst of a lovely family trip was watching at one point and as she read the pin I saw this amazing expression come over her face.” Lisa told GMA. “It was like a light came on. She said, ‘You. You are my life goal. Have the most amazing day you’ve ever had an do it for all of us.'”

Of course, you can’t help feel bad for the kids who were stuck at school all day while mom was off at Disney World. Luckily, they still get to spend plenty of time in the nearby park.

“We live so close it’s just a regular part of our lives,” she said. “It’s not unusual to pop into Epcot for lunch or go for a run at a resort or take the kids to ride a favorite attraction or see a favorite show after running errands on a weekend.”

Another amazing night at MNSSHP!!

Posted by The Castle Run on Saturday, 15 September 2018

“They were excited for their first day at school and I was excited for some time alone,” Lisa said. “Pickup time came soon enough and all of us had lots of fun sharing the details of our day.”

You do you, moms. Drop the kids off and have some summer adventures for yourself…

Or just stay home and celebrate with some wine, like these Florida moms:

School’s back in session! Share this story with a busy mom who could use a break!