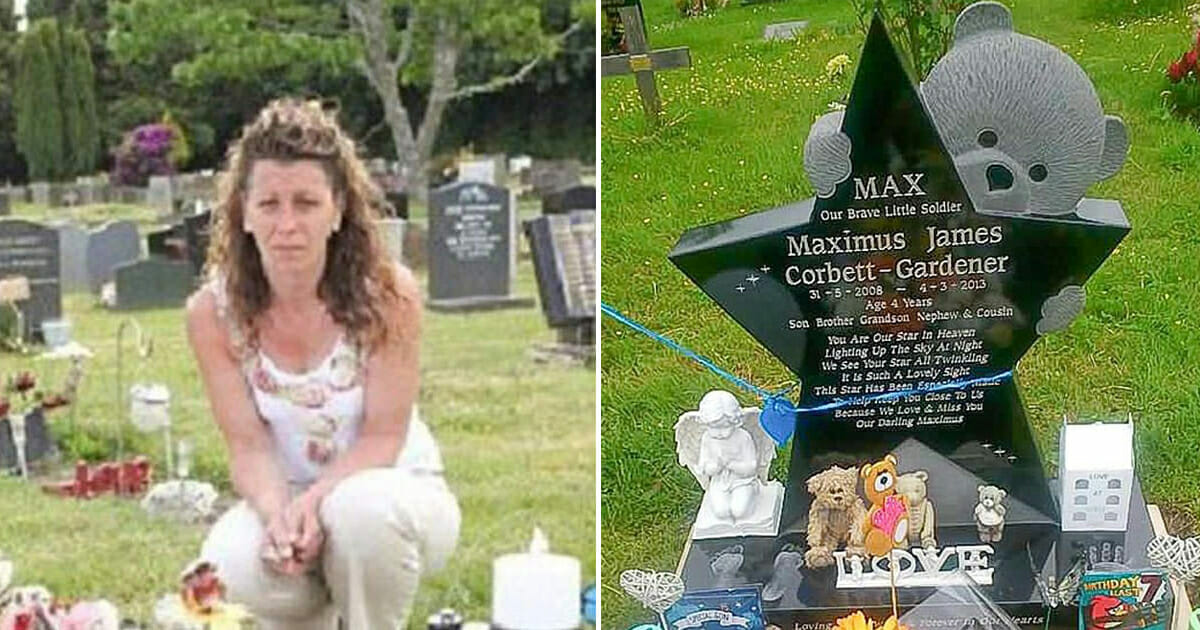 A parent should never have to survive their children. Personally, I can’t imagine any worse torment.

To honor her son, his mom wanted to get him a custom-made headstone that paid tribute to the individual he was.

In the end, she settled on a teddy bear holding a star with Max’s name on it. The custom headstone cost around $4,400, but Jo believed it to be worth every penny.

Inscribed on the star were the words: “Max, our brave little soldier,” accompanied by the year of his birth and a heartfelt poem. Jo was moved when she saw how many people laid gifts and well-wishes at the site; how many people were cherishing the memory of her little boy. Sadly, it turned out not everyone was appreciative.

With Max’s birthday approaching, Jo was met with a truly horrific sight when she went to visit her son one day.

His headstone had been removed. At the time, she had no idea what could possibly have happened, though she soon learned a sickening truth.

Apparently, another cemetery-goer had complained that the headstone didn’t fit in aesthetically. They’d actually asked for the headstone to be removed.

“I was totally unaware this was going on,” she told the BBC.

“The council did not contact me and it was the stonemason who told me he’d been ordered to remove it.

“I feel upset, distressed and angry. We have been through so much as a family. I could understand if the grave was uncared for or unsightly, but it isn’t.”

UK: Jo Corbett-Weeks, 42, saved to have a special headstone made for Max, her son who died from multiple congenital issues, but the stone was removed from Great Malvern Cemetery, Worcestershire, following a complaint from one person.#WhatsWrongWithPeople pic.twitter.com/9kUm28iD1q

When the news first broke, a spokesperson for the local council was contacted by the BBC for an explanation as to why the headstone had been taken away so abruptly. The reply was:  “We have a conformity of shapes in our lawn cemetery. We were contacted by people who objected to the shape. The longer it stayed up, the harder the process would have been.

“It was a very difficult decision to remove it but one we had to make straight away.”

In the same interview, the spokesperson claimed the stone mason had put the headstone in place without the correct approval. The stone would have been fine in the children’s section of the cemetery, but not where it was placed in the lawn cemetery (where Ms Corbett wanted her son to be with relatives).

This story makes me so sad. I wonder how anyone could do that to a grieving mom?

Firstly, I don’t understand how they could ever think it would be acceptable to remove the headstone without consulting Ms Corbett herself. Secondly, what does it matter how someone else’s grave looks? It should have no bearing or effect on anyone else, providing it doesn’t encroach on the space of others.

Share this article with your friends on Facebook if you think the mom should have been informed of the decision to remove Max’s headstone!