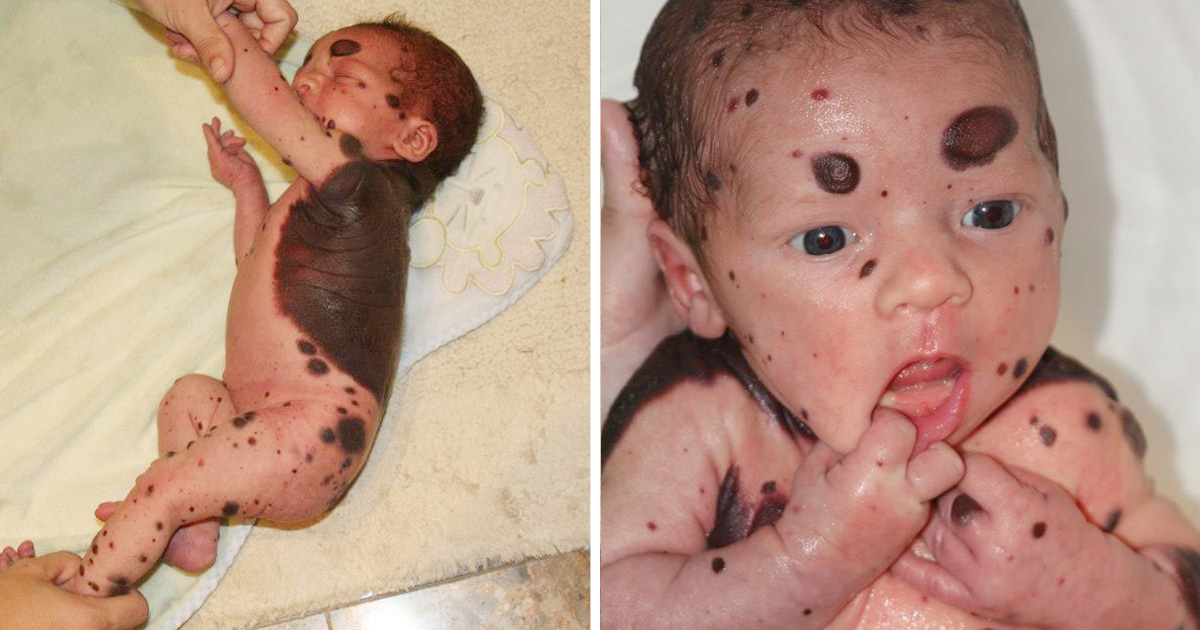 When Dylan was born five years ago, his doctors quickly realized that something wasn’t right with the newborn. The skin on his back was dark red and the rest of his body was covered in large black liver spots.

It turned out Dylan was suffering from a serious condition called Congenital Melanocytic Nevus. About 80 percent of his body was covered in birthmarks.

The doctors explained to Dylan’s mother, Kara, that her son would have to go through several surgeries during the first years of his life.

Patients suffering from Congenital Melanocytic Nevus have a high risk for skin cancer. Therefore, it’s extra important for them to constantly keep an eye on their birthmarks.

The gigantic mole that covered most of Dylan’s back was so big that doctors wanted to surgically remove it. But it would be no easy operation as it required transplanting skin from other parts of the baby’s body.

As Dylan grew older, his doctors decided to proceed with the more complicated operations. To be able to produce enough skin for transplants, doctors had to insert implants, similar to breast implants, into the boy’s body.

Dylan carried the implants for three months and his skin grew bigger during that period. The idea was that there would be enough excess skin to cover the area of the gigantic mole on the little boy’s back when they were removed.

The number of operations Dylan has been through so far has been anything but few. After 26 operations, around half of the boy’s gigantic mole has been removed.

“We’re holding onto hope that the moles never turn on and become cancerous, but he could develop cancer at any point,” his mother, Kara, told the Telegraph. “He has surgery every three to six months, dependent on which area of the body.”

Despite all the surgeries and his time recovering, Dylan is a happy little boy.

“We are trying to do what’s best for him, we want to give him the fullest, longest life we possibly can,” Kara said to the Telegraph. “Dylan amazes me constantly, he always has a smile on his face and feels like he owns the hospital, all the nurses know and love him.”

Dylan is well aware that he looks different from most kids. Strangers often stop and stare when he’s out in public. When that happens, Dylan simply explains to them why he looks the way he does.

Generally, people are just nosy and not too nasty. There are times, however, when people have been really mean.

“Once in a supermarket a store manager asked us to leave because one of their customers was upset about having seen our child, which was very upsetting,” Kara said.

But the mother refuses to hide or be ashamed of her boy.

“I’m not afraid to take him out at all and I don’t want him to be worried or think there is something he should be ashamed of.”

Dylan is one brave little boy and absolutely adorable despite his birthmarks. We really hope the rest of his operations run smoothly.