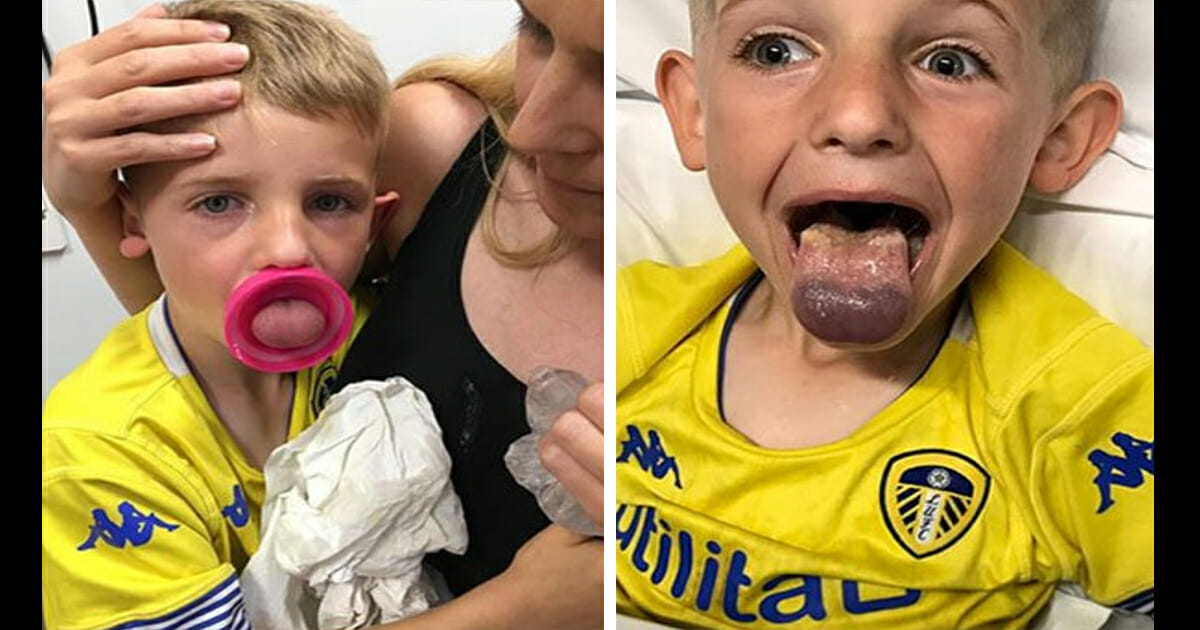 As a mother or father, you never stop worrying over the safety of your children. We all know the world is a dangerous, unpredictable place, and life can be bitterly cruel.

Of course, we try our best to keep our children out of harm’s way, but sadly, it’s not always possible.

One mom, from near Lancaster, England is now issuing a warning after her son needed emergency surgery to save his life, all over something as simple as a plastic bottle from the store.

Riley’s Wooff’s tongue got stuck and began to swell. When his mom, Clare, got him to the hospital, doctors told her he might even die.

As per Metro, Riley had been visiting his grandmother before the incident occurred.

“She made him a drink and a packet of crisps for football,” Clare said. “She feels guilty now, but it wasn’t her fault at all.

“I heard a mumble and he started saying “mum! mum! I’ve got my tongue stuck!” ‘I thought it wasn’t anything major and we pulled over. I thought I’d get it out easily. I tried to undo the bottle top and see if we could get it free like that, but we couldn’t.

“‘Riley was shouting “ring an ambulance!” All this time we didn’t think he was in danger, we felt a bit silly going into the hospital.”

Boy, six, nearly loses his tongue after getting it stuck in Sainsbury's plastic water bottle https://t.co/c5VdeVZJkb

It transpired, however, that Riley was in serious trouble.

“We went in to A&E and a nurse couldn’t loosen it either,” Clare continued.

“Riley was really upset and screaming. A doctor managed to get the bottle off, then it was just the lid stuck on his tongue. That was when it became frightening.”

Doctors managed to cut the bottle off, but the lid wouldn’t budge. What’s more, they then noticed there was a spout going down the back of his tongue, and so called a specialist.

Unable to get any tubes down his throat – because the bottle was in the way – general anaesthetic was out of the question. There were fears he could stop breathing any minute and suffer cardiac arrest.

Clare relayed: “The surgeons said, “This is really serious. We need to warn you he could die”.

“I thought how on earth could this happen from a water bottle? I was with my mum and we were just distraught.”

Fortunately, a team of ten were able to remove the lid while Riley was sedated. The little boy spent a night in hospital while the swelling went down, but his mom has been warned he made need further surgeries.

Clare added: “I don’t think he realised the severity of it. He’s enjoying running around the garden like nothing’s happened.”

God bless you, Riley. We’re sending all our thoughts and prayers in your direction.

Share this article to help further Clare’s warning about bottles and bottle caps. You never know, it could save someone’s life.