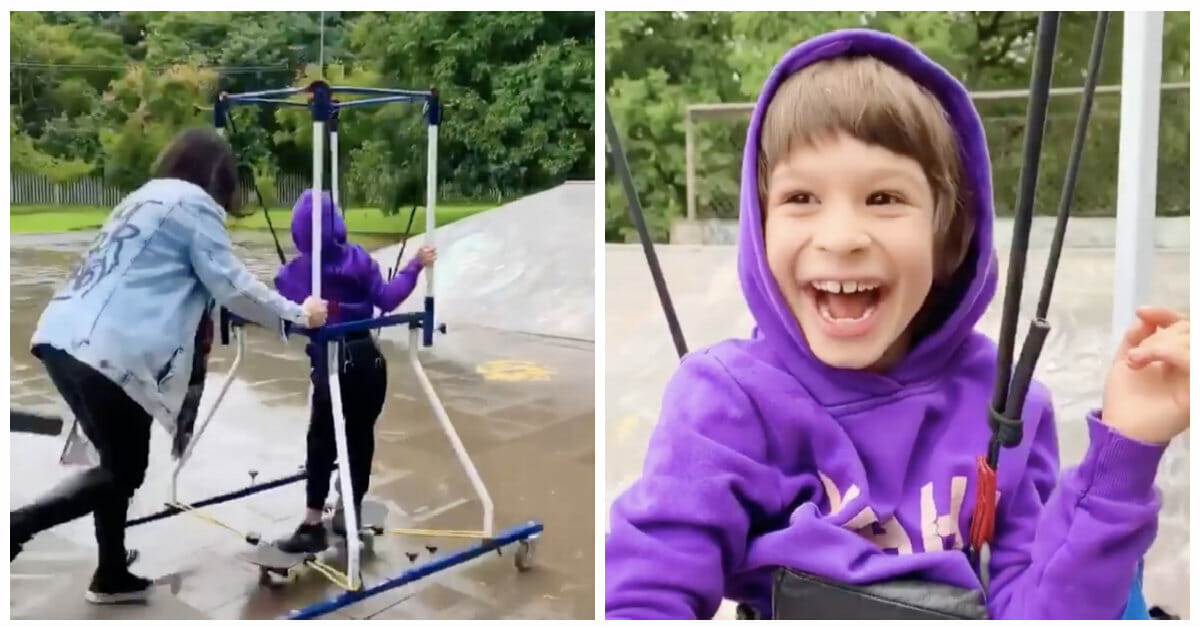 It can be difficult raising a child who has a disability. Any parent wants to give their kid every opportunity possible, allowing them to pursue their greatest dreams, but sometimes physical limitations stand in the way and make things far more difficult.

But one inspiring mother wasn’t going to let her son’s disability stand in the way of his dreams, helping him achieve an unlikely goal with the help of some kindhearted strangers.

Lau Patron is a mother from Curitiba, Brazil. She has a 7-year-old son named João, who she describes as being energetic, adrenaline-seeking and curious about the world.

He’s just like any typical 7-year-old, except that he has cerebral palsy, a condition he’s lived with since he suffered a stroke as a baby.

Like other people with the condition, João has difficulty walking and relies on walking devices and wheelchairs to get around.

Even so, João had a surprising passion for skateboarding. While it seemed unlikely that the boy would be able to ride, it was still his dream.

And despite the odds, mom wanted to do everything she could to make that dream a reality, tired of people with disabilities always being held back.

“For children who have cerebral palsy, or any other kind of disability, having desires and dreams is not allowed,” she wrote on Instagram in Portuguese. “The world is always telling us no.”

Lau tried on her own different ways of getting João on a skateboard, using devices like bikes and walkers, but was unsuccessful.

But she got a some help when she reached out to an organization called SkateAnima. Founded by a physiotherapist and a psychologist who are both also skateboarders, the group believes in showing human potential by giving people with disabilities the chance to skate.

“They thought it was only fair that every child have the chance to love [skateboarding] too,” Lau wrote.

They had previously helped a young girl with cerebral palsy achieve her skating dreams.

A device was created by Ricardo Oliveira, a “skateboarder and atypical father,” that allows people with cerebral palsy to stand on a skateboard, suspended by bars and cables.

João used the device to live out his dream, with his mom pushing him. They didn’t just go up and down the sidewalk, however: they went all out, going down ramps at the skatepark.

While it no doubt tired Lau out by the end, João looks thrilled skating around, and it’s truly a beautiful moment:

The heartwarming video was shared by a skateboarding platform, and shared by Lau on her Instagram page, thanking SkateAnima and everyone who made the project happen for their help.

It’s been lighting up the internet, and serving as an inspiration to people with disabilities everywhere.

It’s a story that shows that people with disabilities are capable of doing the most unlikely things with a little help.

But Lau, who is a writer and activist, believes we need to continue fighting for more visibility and opportunities for disabled people, who are constantly being limited.

“Kids grow up suffocated by a world that pretends not to see them,” Lau wrote on Twitter, saying that it’s institutions that discriminate that are the problem, not disabled people. “Inclusion is not a favor.”

It’s a beautiful, heartwarming video, and a reminder of the need to create more inclusive spaces and opportunities for the disabled.