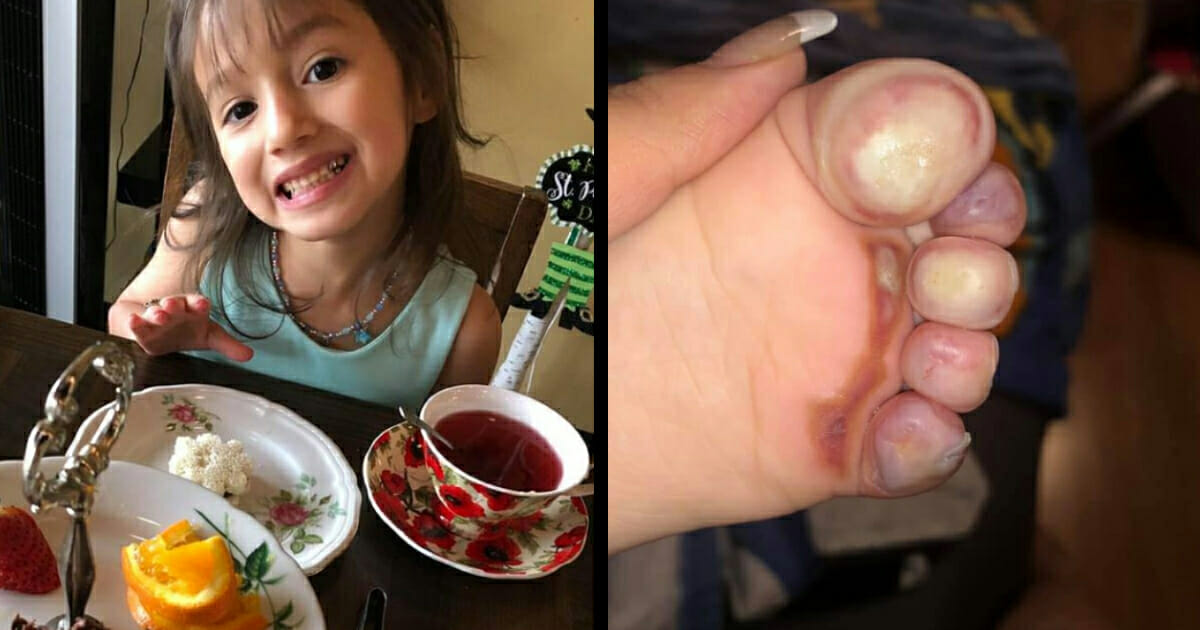 As moms and dads, we’re constantly vigilant when it comes to keeping our children safe and away from things that might do them harm. Sharp corners or objects can be a parent’s worst nightmare, while everyday household dangers like irons, knives, and chemicals are usually placed well beyond a child’s reach.

Unfortunately, it’s a harsh reality that, try as we might, we’re unable to protect them from literally everything. It’s an impossible task, and one made all the more pertinent by the fact that we can’t literally keep our children in a protective bubble all of the time. They need to try and experience things, as well as be able to enjoy the life they’re living as they learn about the world.

Of course, it’s in the process of allowing them to do so that we as parents so often open them up to dangers that we might not even consider. That was certainly the case for one Texan mom, who bought her daughter, Rosie, a pair of new sandals to wear.

According to her post on social media, mom Felicia Hillman thought little of danger when she purchased a pair of new sandals for her daughter.

“So a few weeks ago, I bought Rosie those jelly sandals from Walmart,” she wrote on Facebook. For those who don’t know, or don’t remember “jellies,” they’re a footwear trend that was popular in the ’90s and has enjoyed something of a resurgence of late.

Crafted from PVC plastic, and sporting holes to allow airflow, they’re generally cheap and colorful; a win-win for a mom looking to buy new shoes for her daughter.

Only, there’s a catch, and one that isn’t necessarily obvious to many moms and dads who might be considering purchasing their little girl a pair. After just one day wearing the “jellies” to daycare, Rosie came home in pain.

“After one day in them she came home from daycare with blisters,” Hillman wrote. “ONLY ONE DAY WAS SHE IN THEM.”

After a few days, things got worse. The blisters turned into wounds similar to third-degree burns, with Hillman eventually having no choice but to rush Rosie to ER.

“After countless antibiotics and creams finally we have some relief,” she said in her post. “Thank God this steroid cream is working. … We have to see a plastic surgeon to make sure she won’t need skin grafts to make up for the skin she lost.

Anyone who has girls don’t buy the jelly shoes from Walmart! I heard about this last year and now it’s still happening! Chemicals from those shoes are ruining our babies feet!

“My poor Rosie girl has been a trooper. From blisters to horrific skin peeling and bleeding.”

Sure, “jellies” – and indeed similar shoes – look cute, and they can be an ideal choice in the right situations. Be warned, though, they can also cause injuries that border on the severe.