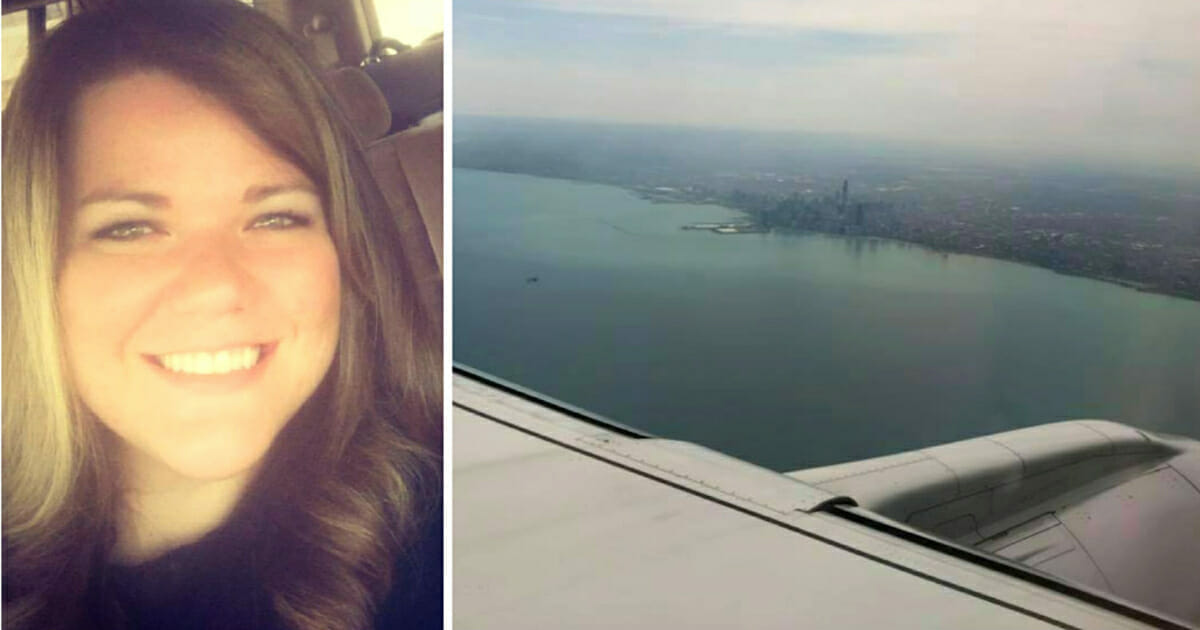 32-year-old Savannah Phillips loves to travel. She’s flown more than a fair bit during her life so far, and thought she’d seen it all. That proved not to be the case just a few weeks ago when she had an unforgettable – and scary – trip. To her it felt like being trapped in a terrible situation… thousands of feet above the ground.

After the unusual flight, Savannah shared her story on Facebook – and for very good reason.

Her plan was to fly to Chicago, only her flight got moved forward. The reason? The airline realised there was a storm brewing, and didn’t want to risk anything. As a result, they were taking off earlier than expected.

Given that it was a different flight than planned, as they boarded the airplane no one was sure where to sit. Savannah knew from experience that she would rather have a row to herself.

She nevertheless ended up next to a stranger. She could never have known how difficult their encounter would be.

No sooner had the flight attendant started her safety brief, did Savannah spot the passenger next to her – a 60-year-old man – pick up his mobile phone.

The screen was large and bright, and close enough for Savannah to see exactly what the stranger was writing.

Then she realized, with a sickening certainty, that he was actually messaging someone about her.

“His phone was maybe 12 inches from my face and he proceeded to text someone that he was sitting next to “a smelly fatty,” her Facebook post reads.

“I don’t even know what the rest of his text said. I turned my head away as fast as I could. I was shocked and it was like confirmation of the negative things I think about myself on a daily basis. Before I knew it, I could feel hot, salty tears coming down my face. I sat and cried silently, hoping this guy didn’t try to make small talk, because I didn’t trust how I would react and I didn’t want to get kicked off the plane.”

Posted by Savannah Phillips on Monday, 14 May 2018

It was then that another passenger, sitting in the row behind Savannah, stepped in and took action. He, too, had seen the words, and wasn’t ready to let the guy with the cellphone get away with it. He immediately intervened.

The man – named Chase Irwin – rose from his seat, took a step and tapped the offensive man on the shoulder. Savannah heard him say: “Hey- I need to talk to you.”

Chase informed the man that he refused to sit in silence while he wrote nasty comments about Savannah. He then told him that he was heartless and needed to learn how to treat other human beings.

It ended with the men switching places. Instead of the hurtful passenger she had initially been stuck with, Savannah enjoyed a flight with a hero. She began to cry, and so he gave her a hug to make her feel better.

“He encouraged me not to let that guy get to me and that everything was going to be fine,” Savannah says.

In her post, she also revealed that the pair continued to talk for the remainder of the flight, discussing topics ranging from Savannah’s children, to their jobs. The story has quickly gone viral since, after a television station picked up on Savannah’s Facebook story. Chase is now being celebrated widely as the hero he really is.

Share this if you also think it’s important to stand up to bullies when you see someone being treated badly!