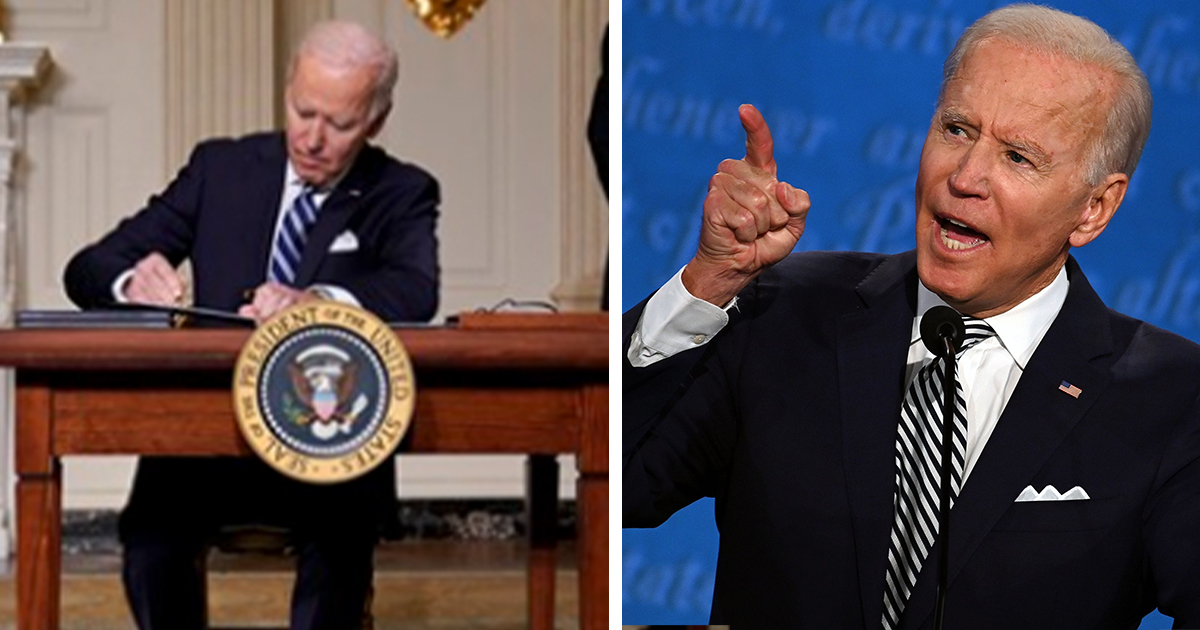 Joe Biden has promised change for America since taking over the reins from the outgoing Donald Trump, but it’s safe to say he’ll face battles no matter which direction he decides to try and go in.

It might have been little over a week since Biden was officially sworn in as the United States’ 46th President, but he’s wasted little time in letting his intentions be known.

Biden signed executive orders to reverse a number of his predecessor’s most controversial policies, including halting work on Trump’s infamous border wall between the U.S. and Mexico, making a U-turn on transgender citizens being able to join the military, and moving to suspend oil and gas drilling permitting.

Changing of the guard

We all knew his stances on various topics would be widely different from the ones Trump took. Yet that doesn’t mean he won’t face stiff pushback when he tries to ring the changes.

Already, it’s been made clear that those who make their money through oil and gas are not happy with Biden’s planned march to a renewable-energy economy. Naturally, they’ve voiced strong concerns that such a move will result in the loss of thousands of jobs and further impact an already battered economy.

In one of his first moves as president, Biden moved to reenter the U.S. into the Paris Agreement, a global pact to help fight the affects of climate change before it’s too late.

Fast forward to now, and the President has signed the executive orders to put the country on what he terms an “irreversible path” to an economy built of sustainable, renewable energy.

Speaking at the White House, President Biden warned: “We can’t wait any longer.

“We see it with our own eyes. We feel it. We know it in our bones. It is an existential threat. There is a climate crisis. We know what to do; we’ve just got to do it.”

Biden’s orders also called for the creation of a “Civilian Climate Corps Initiative,” the protection of scientists from “political interference”, the elimination of fossil fuel subsidies, and the conservation of 30% of U.S. lands and oceans by 2030.

It took little time for certain feathers to be ruffled.

The very same day as Biden signed the papers to put his actions into effect, the Western Energy Alliance hit back with a lawsuit, claiming that the president had exceeded his authority and violated a string of federal laws in the process, including the National Environmental Policy Act (1970).

As per the Washington Times, Kathleen Sgamma, the Alliance president, said in a statement:

“The law is clear. Presidents don’t have authority to ban leasing on public lands. All Americans own the oil and natural gas beneath public lands, and Congress has directed them to be responsibly developed on their behalf.”

Biden himself, meanwhile, moved to clarify that he does not intend to eliminate existing hydraulic fracturing, or fracking for that matter.

Whilst admitting that climate change “will be the center of our national security and foreign policy”, Biden said: “Let me be clear, I know this always comes up — we’re not going to ban fracking,”

It looks more than likely that the president will also face the ire of the GOP as well, with Republicans branding his orders a “war on energy”. They claim the move will drive up energy costs, which in turn will send American jobs overseas and force the country to rely on foreign imports.

“I’m all for transitioning to cleaner forms of energy, but we have to deal with the reality of, for example, the fact that there are 280 million cars with internal combustion engines on our roads,” said Sen. John Cornyn, Texas Republican.

“How are families going to get to work, take their kids to school, or live their life if all of a sudden the very natural resource that they depend on for their cars is no longer available?”

The fact that Biden has his work cut out for him moving forward will come as news to absolutely nobody. The president was forced to walk through a firestorm of doubt and criticizm on his march to the White House, not at all aided by the baseless lies spread by the Trump administration regarding the results of the election.

Yet if the polls are to be believed, Biden actually finds himself with an early approval rating that is higher than his successor’s ever was.

We reported yesterday how two different pollsters, Morning Consult and Hill-HarrisX, had Biden’s approval rating at 56% and 63% respectively.

For context, Trump never achieved higher than 52% during his four years at the White House, while Gallup’s results had the former POTUS’ average approval rating at just 41% – the lowest of any U.S. president in history.

What do you think about Joe Biden’s first few executive orders and the future of the United States in general?

Should we be focusing on a climate-change-at-all-costs vision? Let us know your thoughts in the comments box.

Meanwhile, share this article on Facebook to keep the debate going, and if you’re praying for a safe and secure America moving forward.