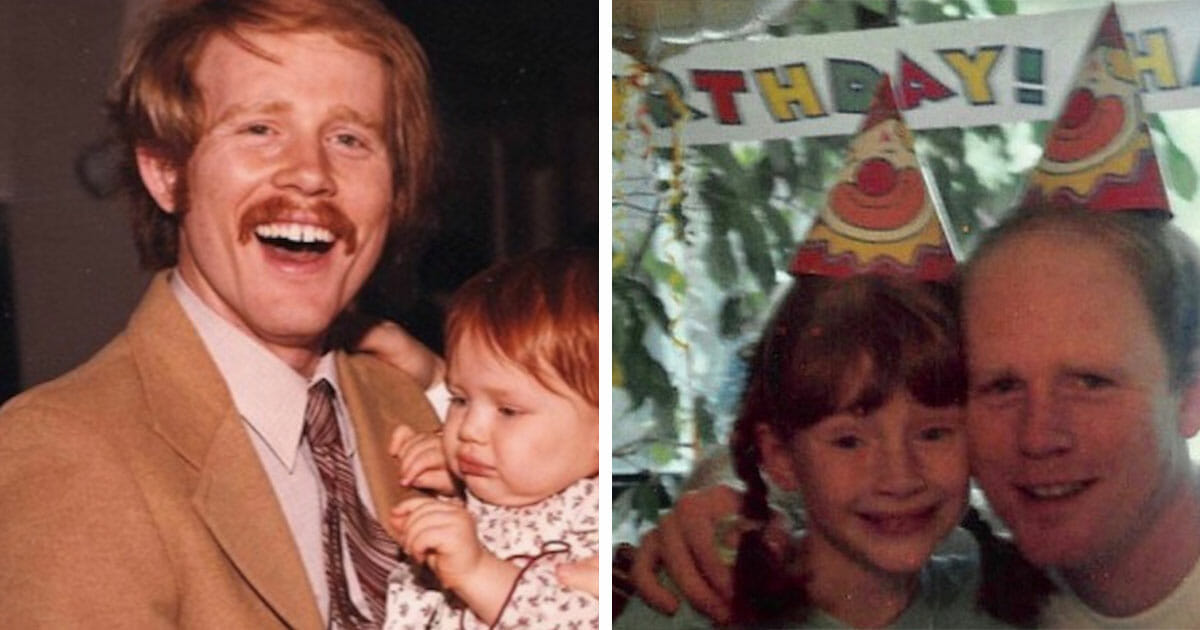 Ron Howard might still exist in the minds of many people as a child or a teenager, having been a famous child star. It’s easy to forget that Howard, who shot to fame as Opie Taylor in The Andy Griffith Show and later played Richie Cunningham in Happy Days, is now 65-years-old.

Over the years, Howard made a name for himself as an actor, before eventually transitioning to directing. It was in this capacity that he’s had arguably his biggest successes, with his credits including the likes of Apollo 13, A Beautiful Mind, The Da Vinci Code and Solo: A Star Wars Story.

Backward Dance. Burroughs High School in Burbank '71. Cheryl made that formal It was my 1st corsage pinning experience

Away from the big screen, Howard married his teenage sweetheart, Cheryl in 1975. Then, in 1981, the couple welcomed their first daughter, Bryce Dallas Howard, to the world.

Reveling in parental attention before those other three ginger kids made their entrances. #fbf

Ron and Cheryl would go on to have three more children together – a set of twins, Jocelyn and Paige, in 1985 and then son Reed in 1987.

#TBT to my favorite twinnies ?

Acting out of caution, Howard and his wife always did their best to ensure their children were kept out of the searing glow of the spotlight. They wanted their brood to enjoy as normal a childhood as possible, without the distractions and stress that ultimately come with growing up in the media’s eye.

That changed slightly, however, when Bryce was seven. Howard allowed her to serve as an extra in some of his films, giving her a taste of life in front of the camera and forming a goal that she would then pursue tenaciously.

It would appear she relished this early exposure to acting, since, well, she sought a full career in it.

I loved wearing these two dresses and now they can be yours, all yours! They're both up for auction! The yellow dress I wore to the 2017 Critics' Choice Awards, the fuchsia dress I wore to the 2017 SAG Awards, and both are very schmancy (and comfortable!)! All proceeds benefit The Halo Foundation. Get your bids in now! https://haloworldwide.org/bid-now-two-red-carpet-dresses-worn-bryce-dallas-howard/

That’s right, Bryce Dallas Howard, now 37, is fast becoming a household name. Having worked previously at a number of theater companies, she enjoyed supporting roles in films throughout the 2000s.

It was in 2004, though, that she got her first real taste of fame. She was cast as Ivy Walker in the 04′ blockbuster The Village, and since then has moved from strength to strength.

She’s also featured as Victoria in The Twilight Saga: Eclipse and then appeared opposite Chris Pratt in Jurassic World. She can also be found alongside Matthew McConaughey in Gold, and in an episode of Netflix’s popular show Black Mirror.

On her social media accounts, she makes it clear that she’ll never forget her roots. She maintains a strong bond with Ron and, as her career grows from strength to strength, she continues to honor the people who helped her get where she is.

A beautiful and emotional evening at last night’s premiere of @brokenmemmovie to benefit Alzheimer’s Greates Los Angeles @alzgla! I’m so damn proud of my grandfather Rance Howard‘s exquisite performance in this film and thankful to everyone who joined in the celebration!

Quite the difference from the little girl who was kept out the spotlight, to the woman who can’t help but end up in it!

Ron and Bryce isn’t the only actor in his family. Ron Howards mother Jean, gained critical acclaim for more than 30 different TV shows – such as Married… with Children, Grace Under Fire and Buffy the Vampire Slayer.

Bryce’s younger sister Paige, meanwhile, is notable for her performances in Adventureland and The Employer.

Thank you all for the supremely kind and meaningful birthday messages, it means so much to me! Here's a pic of me as a little one. I can't remember how old I was (which is probably a sign of aging, ruh roh :/)!

Are you a fan of Ron Howard? Are you also a fan of Bryce? If so, SHARE this article to show people what she’s up to now!