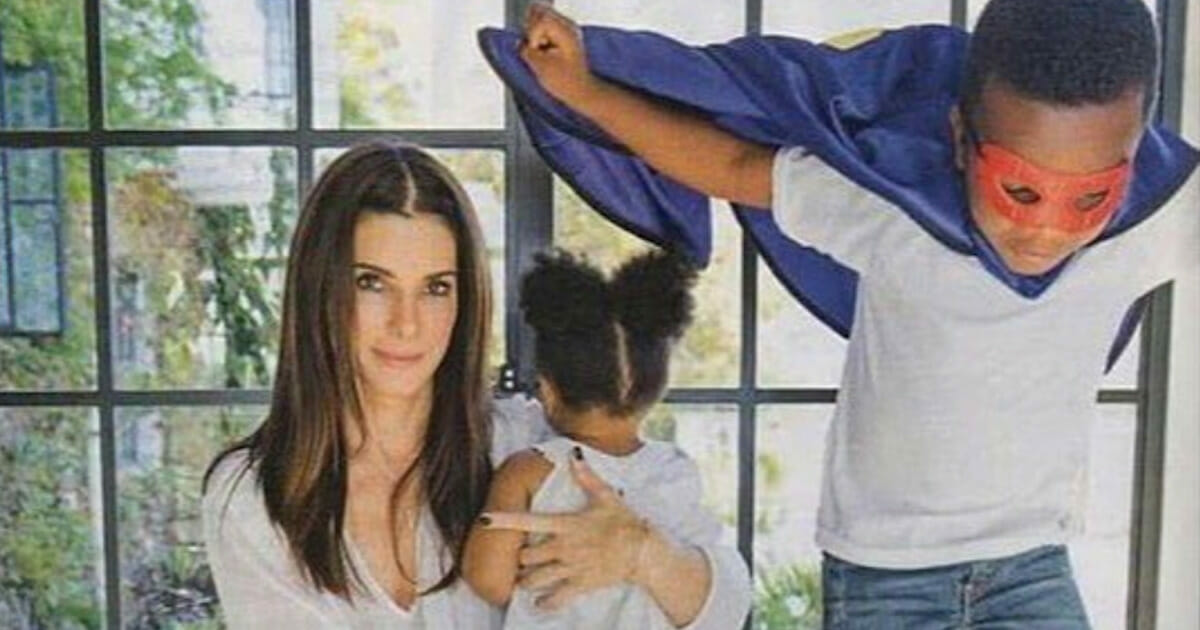 Sometimes we fail to comprehend the significance of the words we use in day to day life, especially when we’re referring to people.

When it comes to motherhood, society at large recognizes a mother as someone who has used their eggs to conceive and give birth to a child. For whatever reason, it’s often forgotten that millions of people the world over become parents through adoption.

For the moms and dads who choose to adopt, the matter is very simple: the children they take in are their children, just the same as if they shared a biological connection. And yet some people persist in making a distinction by way of terming them ‘adopted children’.

Well, actress Sandra Bullock is taking a stand and calling for an end to the practise, as per an interview with InStyle. She has two adopted children of her own, and from her point of view they are as close to her as any child born to her naturally would be. She might not be their biological mother, but her maternal instincts are no different to what they would be if she was.

Hollywood star Sandra Bullock is known for her brilliant performances in box office successes such as “The Blind Side”, “Bird Box” and “Ocean’s 8”.

The Virginia-born actress has won several awards throughout her career. She’s also one of the highest-paid actors in Hollywood; it’s believed she has a net worth of $250 million.

But Bullock has never let her huge fortune define who she is. Instead, she has been labeled “America’s sweetheart”. Despite all her success on the silver screen, Bullock has been praised by the media for her “friendly and direct and so unpretentious” nature.

There’s no doubt that Bullock has a heart of gold and an outstanding level of commitment to her fellow human beings. She’s a huge supporter of the American Red Cross for one, and the actress has donated millions of dollars to the organization.

But in recent years, it’s Bullocks children and her views on adoption and motherhood that have come into the media’s focus. In 2010, Bullock announced she planned to adopt a son born that same year, in New Orleans, Louisiana.

In an interview with Parenting, the Academy Award winner revealed why she chose to consider adoption.

“I did think, ‘Maybe not.’ Then [Hurricane] Katrina happened,” the Blind Side star shared. “I’m going to cry … Katrina happened in New Orleans and something told me, ‘My child is there.’ It was weird,” Bullock said.

Today, the 57-year-old Bullock is the mother of two adopted African-American children, 11-year-old Louis, and 8-year-old Laila. As mentioned, Louis was adopted in 2010 from New Orleans. Laila arrived at the Bullock home in 2015, after spending the first period of her life in foster care in Louisiana

According to Bullock, Louis is a kind, sensitive kid with good leadership skills. Laila, meanwhile, has been described as a fearless girl and a young fighter.

Since adopting the children, the Hollywood star has kept them both out of the searing spotlight that comes with public attention. She’s protective of her childrens’ right to privacy, and rightfully so.

Bullock recently challenged the notion that adopted children should be referred to as such, publicly asking that society and the mainstream media no longer keep up the archaic pretense.

“Let’s all just refer to these kids as “our kids.” Don’t say “my adopted child.” No one calls their kid their “IVF child” or their “oh, shit, I went to a bar and got knocked-up child.” Let just say, “our children,” Bullock said in her InStyle interview.

Sandra feels that women have a right to ask that people don’t make the distinction between children and “adopted children”, because being a mom is so much more than simply biologically bringing a baby into the world.

She wants her children to have a perfectly regular upbringing – but also keep them close to her. In 2015, the protective mother even filed a lawsuit against a publication that used images of her daughter, Laila, without consent.

Recently, the Hollywood actress gained attention when she talked about the struggles of raising Black children. In an interview with Red Table Talk, she met Jada Pinkett-Smith and Adrienne Banfield-Norris. There, Bullock opened up on her parenting and how it is to be a mother to two adopted African-American children.

Bullock said that she sometimes wishes that she ”matched” the skin color of her children. According to Bullock, that would make things a lot easier regarding how people perceive them as a family.

”To say that I wished our skins matched… sometimes I do,” Bullock confessed.

”’Because then it would be easier on how people approach us. And I have the same feelings as a woman with brown skin, and it being her babies. Or a white woman with white babies”.

Both Bandfield-Norris and Pinkett-Smith agreed with Bullock.

Pinkett-Smith’s daughter, Willow, was also in the studio. Willow said that skin color should not matter in a mother-child relationship.

”It’s the mother-child dynamic. There is no color. We don’t have to put a color on..,” Willow said, before Bullock cut in.

The actress replied that she hoped no one would judge her family because of skin color, and she hoped that people would be able to “see with different eyes.”

A mother isn’t simply the person who provides the egg and womb necessary for a baby’s development. A mother is the one who affords a child all her love, forming an unbreakable bond that transcends time itself.

If you think there’s nothing stronger than the connection between a mother and her baby, share this article on Facebook.