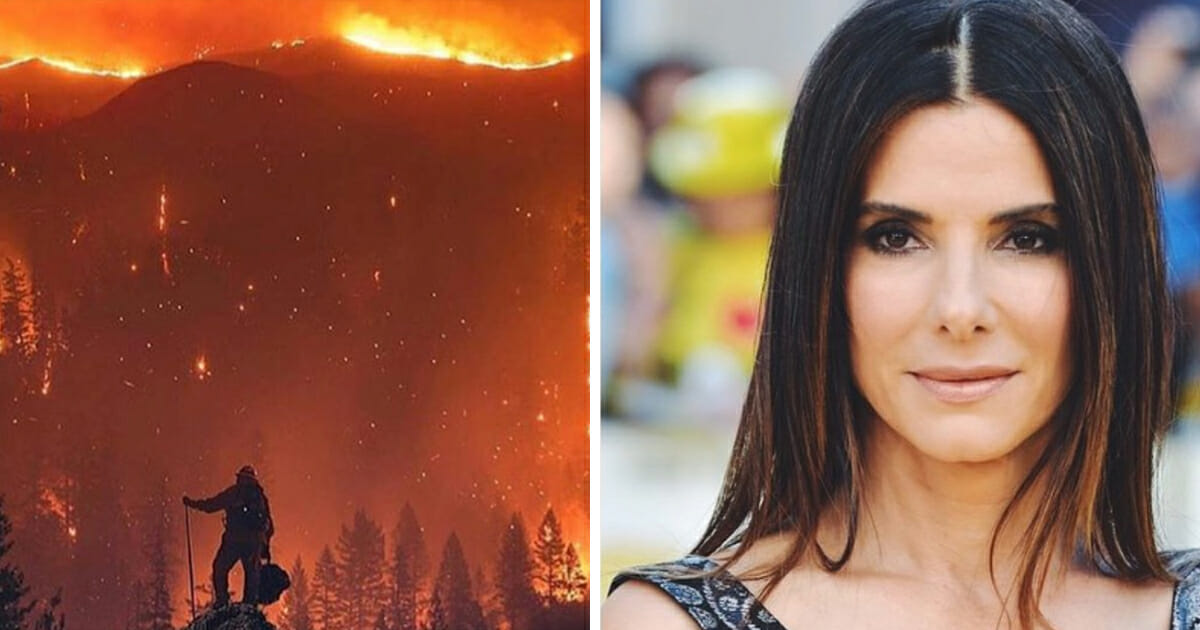 Our thoughts and prayers go out to all the people affected by the devastating wildfires ravaging California.

As of this week, the death toll was confirmed at over 60, whilst thousands have been left without homes, vehicles, businesses and livelihoods as the flames continue to claim all in their path.

And yet, in the midst of the destruction, there are stories of hope emerging.

Lady Gaga made headlines after hand-delivering pizza to a shelter near Malibu, whilst Guy Fieri set up a food tent to feed servicemen and women tackling the blaze.

Sandra Bullock is the latest celebrity to have gotten involved, and her contribution is one that will not soon be forgotten …

According to People, Bullock donated a total of $500,000 to the relief efforts concentrated on tackling the fires. This included $100,000 to the Humane Society of Ventura Country – to help animals – and further $400,000 to the American Red Cross.

At a time when people need to stick together more than ever, the actress gave a statement to the Red Cross about the need for her to get involved.

“The untold destruction from these fires is heartbreaking, especially following the tragedy at Borderline in Thousand Oaks,” she said. “I’m glad to be able to help. We’re all family in this, whether it be human, furry or feathered.”

As of today, the number of people missing in wake of the fires has soared to over 600. Hundreds have been left without homes, forced to live in temporary tent cites with no idea how and when they’ll be able to return to their old neighborhoods.

The two main fires, Camp Fire in the north and Woolsey Fire in the south, have burned a combined area of more than 200,000 acres, whilst contributing to a combined death toll of a reported 66.

Great Fire, We see you. We bow before your power Your majestic roar of light transforming Everything we thought so solid & sure Into dust. Great Fire, We honor you. Master agent of Transformation You teach us True Radical Release. Not the wishy washy letting go of some comforts & conveniences, no. Us humans. With all our habits. Raw coconut water in plastic bottles, « Oh but I recycle! » No. Not enough. True Radical Release. Great Fire, great modeling of this. When we evacuate We realize how little needs to come with How no thing really matters. When our houses burn We are left with no thing We are left so … Alive. We let go. All that has been lost. It is quiet. We realize. Being together is all our hearts want. And all our business burns away. Us humans, so important is our doing Until theres nothing to do but Be in it. Great Fire, You’ll come teach us Until we learn. “We cant solve the problems With the same kind of thinking we used When we created them.” (Einstein) So wipe our minds clean To dust. Let the Ash inside of us feed Dormant seeds from long ago. Let us remember. Let us pause. Let us not be so haste to “rebuild!” If we build it this way It will burn again. What does it mean To start A New? Regenerate. #firemedicine photo by @kellansworld #wildfire #letuslearn #regenerate #regeneratecalifornia #thegaiaschoolofhealing #woolseyfire #fire

A post shared by Marysia Miernowska (@thegaiaschoolofhealingca) on Nov 12, 2018 at 7:28pm PST

Sandra Bullock, our hats go off to you. Thank you for your incredible gesture!

If you’re also hoping and praying for an end to these terrible fires, share this article on Facebook.