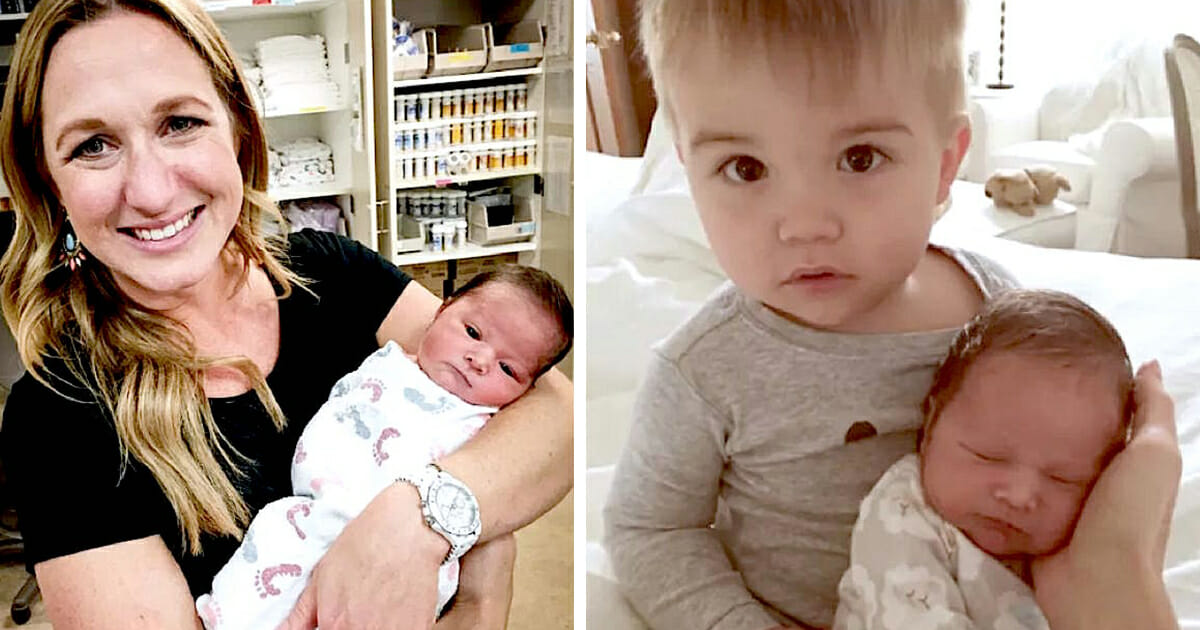 After seeing her first marriage end in her early 30s, Katie Price made the call to embark on a whole new chapter of her life.

She moved into a new home in Colorado, changed her career, and decided to adopt a foster child. Katie had previously struggled when it came to her fertility, but she’d always retained an interest in adopting.

It was in 2016 that Katie – through a caseworker – became aware of a 4-day-old boy who had been dropped off at the local hospital. He had no name, and so Katie called him Grayson. After she’d fostered him for 11 months a court terminated his biological parents‘ right to claim him. Katie knew she had a son for life and the adoption was made on his 11-month birthday.

Little did Katie know what was about to unfold …

Oh how far we have come with Grayson’s eyes! Thank you for all the love on his new glasses… we are working hard to keep them on! And to continue wearing a patch on his left eye for a couple hours a day to help strengthen his right eye. This picture illustrates the eye crossing pre-surgery… it’s been just over a year since he went under the knife in hopes of seeing straight and the muscles have held so far ? #strabismus #eyesurgery #lazyeye #babyboy #fostermom #singlefostermom #lilbabyg #momlife #raisingboys

Katie relished motherhood, and soon decided that she was keen on adding to her little family in the future. Of course, she knew it was better to wait a while and adjust to life with Grayson before throwing another child into the mix, and so planned to potentially adopt again in two years time.

Just one short month later, however, Katie received a call. It was another caseworker calling about a bad situation. A newborn baby girl had been dropped off at the very same hospital Grayson had come from, and was in urgent need of placement.

As Katie explained: “I know over the next 10 minutes and subsequent phone calls I made that afternoon, the phrase ‘I know I am crazy, but God is telling me to say YES’ kept coming out of my mouth.”

Only, it wasn’t until Katie took a closer look at Hannah’s hospital bracelet that she digested just how special her decision to foster Hannah was.

Happy Birthday to our Grammy! She’s come to stay with us this month and Grayson is SO happy ❤️ #grammy #happybirthday #adoption

The birth mother’s first name was the same name Grayson’s birth mother had given to the hospital.

Katie decided to dig a little deeper and, low and behold, while leafing through Hannah’s discharge papers, she found that the birth mom also shared the same birth date as Grayson’s mom.

Could it be coincidence?

Now, Katie accepted that Grayson and Hannah didn’t look alike, but she retained a sneaky suspicion that the pair were somehow related.

“Grayson is half African American with beautiful darker skin and dark curly hair,” wrote Katie, on her blog. “Baby Girl has a pale white skin tone with straight red-blonde hair.”

In her search for the truth, Katie tracked down Hannah’s birth mother. When she eventually found her, it took no time at all for her to realize that the woman was Grayson’s biological mom too.

A DNA test later confirmed that Grayson and Hannah are half-siblings!

And I thought I had my hands full with just two babies! Life gets REAL busy when you have more babies than hands and especially when the oldest just turned 2 ?. The thought of a photo shoot with all three babies is more than I can handle, but I would love to catch them all together at this age. Maybe one day I will conquer that fear! ⠀ ?: @ashleycreativeco ⠀ ⠀ #fostercare #singlefostermom #thisisfostercare #chooselove #momlife #fosterlove #fostertoadopt #adoption #mightymamasbyadoption #adoptionrocks #fostermama #fostering #fosterbaby #thisisus #irishtwins #handsandheartarefull #twinmom #threeunderthree⠀ ⠀

“I could not believe the miracle that had just happened.”

Katie officially adopted Hannah in December 2018, and she’s happier than ever.

“That day I said ‘Yes’ to taking the Baby Girl I felt the strangest feeling ever. I don’t think I had truly until that moment felt a undeniable calling from God (or whatever higher spirit you personally might believe in).

Oh my! I think my followers just tripled in a matter of days ?. I don’t even know if I have done an introduction ever on my account, but it seems appropriate with so many new amazing people following our journey. ? I’m Katie, a single mom who trust God and took a leap of faith… and somehow ended up with a miracle I never could have dreamed in my wildest dreams. I am SO blessed to be the mom to Grayson (2.5 yo) and Hannah (1.5 yo) and two fur babies Henry and Heidi. And I pray to add their brother Jackson (5 mo) to the family this year. I work in the construction industry helping to building hospitals and other commercial buildings. I love DIY home projects and lately figured out how to sew… so on an adventure to make cute things for my babies and the home. I am originally from Alabama, but I have called Colorado home for 10 years. I miss the beaches of the Florida panhandle, but I also love the mountains. Chocolate is my biggest addiction ?. I do not go a day without it! My favorite color is white ☁️ I have no idea what else to tell you about me… but feel free to ask if I didn’t share enough! Thank you SO much for following us on this crazy adventure ❤️ #fostercare #singlefostermom #thisisfostercare #chooselove #momlife #fosterlove #fostertoadopt #adoption #mightymamasbyadoption #adoptionrocks #fostermama #fostering #fosterbaby #thisisus #fostercareis #itsworthit

What an incredible story of chance and ultimate devotion!

Share this article if it put a smile on your face.