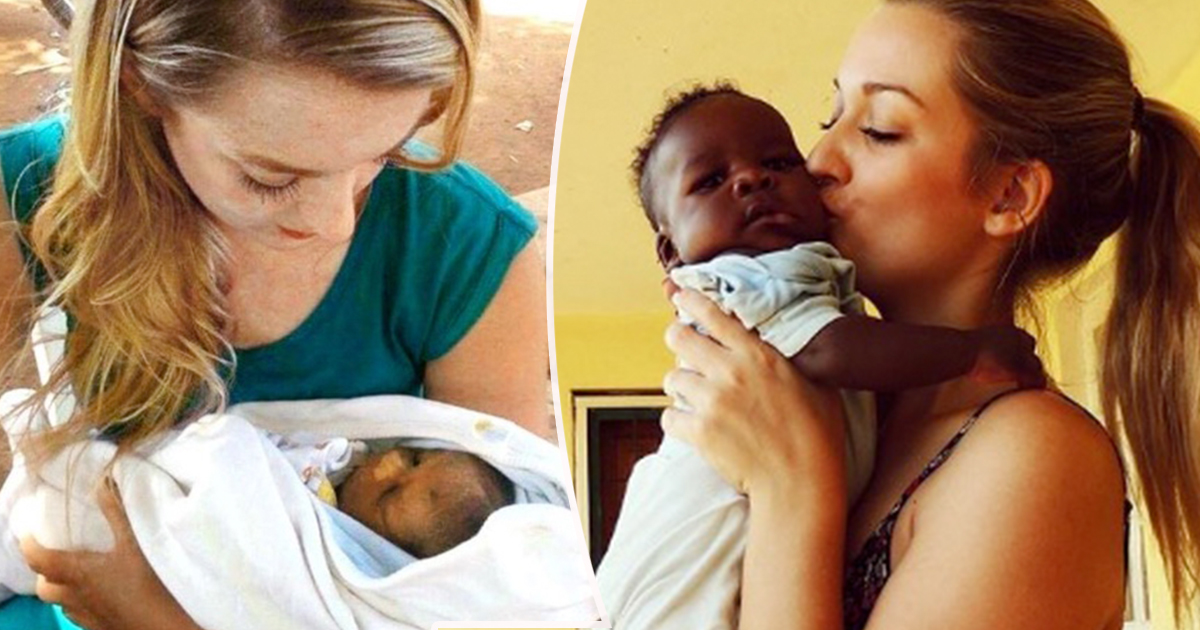 It is not always easy to know what you want in life, especially when you’re young.

I myself know I had many dreams about traveling and making a great career when I graduated. Some plans were fulfilled, others not. Of course, plans also changed over time. Other things become more important – such as family and striking a balance in life.

When 22-year-old Emilie from Worcestershire, England, had completed her education at the university, she felt it was time to head out and see the world. Yet something happened she could have never imagined in her wildest imaginations.

Emilie Larter was almost done with her studies and longed to discover the world. In 2014, she packed her bags and went on an adventurous trip to Africa. Together with a friend, she climbed Mount Kilimanjaro and enjoyed the beaches in Zanzibar.

But after seeing everything she wanted to see, Emilie went to Uganda to volunteer for two months – at least, that was the plan.

Emilie took a job at an orphanage, where she was received with open arms.

”It was a culture shock. The children’s home was in a tiny village about 25km from the nearest town, and I got a lot of attention as the locals weren’t used to seeing ‘mzungus’ (white people). My duties were straightforward – as the only volunteer at the time, I was doing as much as I could for the children. I changed nappies, organised feeds and played with them. I loved it,” she told The Mirror.

While volunteering at the children’s home, Emilie did everything she could to improve the lives of the kids there. She changed a lot of diapers, helped the children eat, and played with them.

After one month at the orphanage, Emilie learned that there was a newborn boy who had lost his mother in a neighboring village. The baby was only five days old, and since neither he nor his six siblings had any relatives, custody passed to the orphanage.

Emilie and a number of other volunteers attended the funeral for the mother of seven – and that was when something odd happened.

It was the beginning of what would change Emilie’s life completely.

“A 5-day old baby was placed into my arms. I was only 22 years old but, at that moment, my life as I knew it changed.”

When Emilie was handed the baby, it didn’t even have a name.

“We took him in and named him Adam and, still being the only volunteer, I became his sole carer. He slept in a woven cot next to my bed and I was with him 24/7. The feeds, nappies and sleepless nights were all down to me, but it was no bother. I felt privileged to do it. I was a qualified primary school teacher, but it was the first time I’d looked after a newborn. I was on the phone to my mum asking advice all the time,” Emilie explained.

The situation at the orphanage was challenging. There was a lack of electricity and running water, and water could only be fetched from the wells when the sun was up, as it was too risky otherwise.

Emilie stayed with Adam as much as she could. The precious little boy slept in a cot next to her bed. He loved being cuddled, and would cry if she wasn’t around. The idea of adopting Adam started to grow in Emilie’s head – but she was but a young student with limited funds.

In addition, the adoption laws in Uganda were quite strict – it was almost impossible for a single woman to adopt a male child.

As time passed, Emilie had to fly home to England to complete her studies. After seven months of caring for Adam, she left with tears in her eyes.

The duo said a heartbreaking farewell and Emilie went back home. Only, she couldn’t stop thinking about Adam.

As soon as she was done with her studies, she went back and saw how much Adam had grown. So she stayed in Uganda for five months, before running out of money and had to return to the UK to work.

“I spent the entire flight in floods of tears thinking how I could get the money for another ticket to visit him. I got three jobs straight away – supply teaching in the day and a mix of bar and care work on evenings and weekends, working seven days a week. I was exhausted, but I had enough money to return a few months later for a couple of weeks,” she said.

While Emilie was in England, Adam had enrolled at a British nursery school in Uganda. Emilie continued to help and sent money for formula, diapers, and clothing.

In the end, Emilie realized that she couldn’t sit in Europe and watch Adam trying to make it all alone.

“I broke up with my boyfriend too. I wasn’t ready to give up what I wanted in life and neither was he,” she said.

Emilie’s heart remained with her orphaned boy, which led her to return to Uganda.

“In August 2016, I moved back to Uganda. Now aged 23 months, Adam came running towards me when he saw me, and it was overwhelming to hold him in my arms again. A few weeks later we moved into a rented house and I got a job at a local school,” she told The Sun.

Emilie created a GoFundme, to raise money for an adoption process.

At the same time, she met a Ugandan man, Josh, with whom she started a relationship. Josh was very kind and good with Adam, so it felt like there was potential to form a beautiful family.

Josh moved in with Emilie and, in October 2016, things started to move two years later. Adoption negotiations took place in the Ugandan capital Kampala, but unfortunately the negotiations got canceled. As a result, Emilie was not allowed to adopt Adam.

Instead, Josh’s cousins, George, three, Tallie, two, and James, one, moved in with Emilie.

In December 2018, however, a message of hope came: The judge in Kampala had announced that Emilie was allowed to adopt Adam, and she finally got it on paper that she was Adam’s mother.

The adoption was completed in November 2020. After living in Uganda for four years, Emilie moved home to the United Kingdom to begin the next chapter in her family’s life.

The mother-son-duo moved in with Emilie’s parents – who were delighted to see their grandson for the first time.

In December 2021, the adoption process in the UK was also completed, so now Adam is Emilie’s son in both countries.

“My baby boy, totally unplanned, totally unexpected. I was just 22 when he was placed into my arms at 5 days old. 7 years and 4 months later, he was forever mine and I was forever his.”

Josh and his cousins ​​still live in Uganda, but Emilie hopes the whole family will be reunited soon.

What an awesome story! You truly are an amazing young woman! Best of luck to you and your beautiful family!

Feel free to share this story on Facebook if you were also affected by how Emilie chose to work hard to return for the orphaned boy Adam.