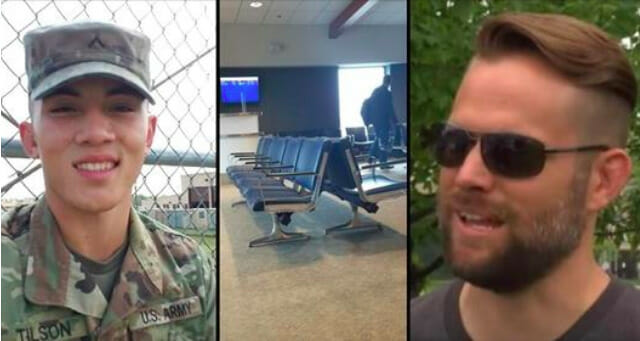 Few places make me feel as bitter sweet as airports. On the one hand, they symbolize potentially exciting new adventures. On the other, I am not a fan of the crowdedness and chaos that often accompanies the airport experience. It can be daunting and leave you desperately wanting to just get to your destination already!

For one young recently enlisted American soldier, this feeling of wanting to get home certainly took over all else.

Keaton Tilson hadn’t seen his family for months — and now he was stuck at the airport for two days with home still nowhere in sight.

Keaton had joined the army just 8 months prior to that day at the airport and was stationed at Fort Hood in Texas.

Approving leave for newly enlisted personnel is no easy feat and can happen very last minute. That’s what happened for Keaton: he got a last minute confirmation that his request to go home to St. Louis for Memorial Day Weekend was approved.

He rushed to the airport and once there, tried to get on the first flight home. But the young army mechanic was out of luck.

Keaton was holding on to a standby ticket, but seats were filling up — and none were for him. Hours went by, then a whole day, then two… but Keaton was out of luck. It began to feel like he’d be spending the weekend at the airport, and not with his loving family.

He was at an airline counter looking for solutions with an agent, when a complete stranger overheard the conversation. When the stranger, Josh Rainey, who was also heading for St. Louis, heard Keaton’s story, an overwhelming feeling of sympathy overtook him.

He barely hesitated — and found himself instinctively offering the young soldier his own ticket.

Unfortunately, the airline agent informed Josh that such a transfer wouldn’t be possible. Meanwhile, a stunned Keaton could barely speak.

The young soldier was deeply moved by this stranger’s sudden gesture of kindness — even if it was impossible to pan out.

Josh apologized that his offer had failed, and Keaton thanked him profusely. But as Josh walked away, he just couldn’t let it go. As if inspired by his own instinctive gesture of compassion, he felt that he couldn’t give up.

“I called my wife which i would do in a situation like that, to ask for her advice,” Josh said. “…And we agreed both that it was the right thing to do, to go back and buy the ticket.”

And that’s just what he did. Josh solved the problem once and for all, purchasing a $341 ticket for the soldier he could immediately fly home with.

“I’m very appreciative because if it wasn’t for him, I probably wouldn’t be here right now,” a grateful Keaton said once back home. “Honestly I feel like I would still be at the airport because it’s Memorial Day weekend.”

As for Josh, he says it simply felt like one of the best ‘investments’ he’s ever made.

“He walked away and came back and asked if he could hug me, and I think we both had to fight back the tears after that,” Josh said. “It was pennies, pennies on the dollar compared to what I got back from that hug.”

Watch a news report about this wonderful encounter below.

This story goes beyond the fact that Josh obviously appreciates our service men and women — it was a pure act of kindness from one human to another. Share this wonderful encounter with all your family and friends today to remind them that there are still people with hearts of gold like Josh in the world!