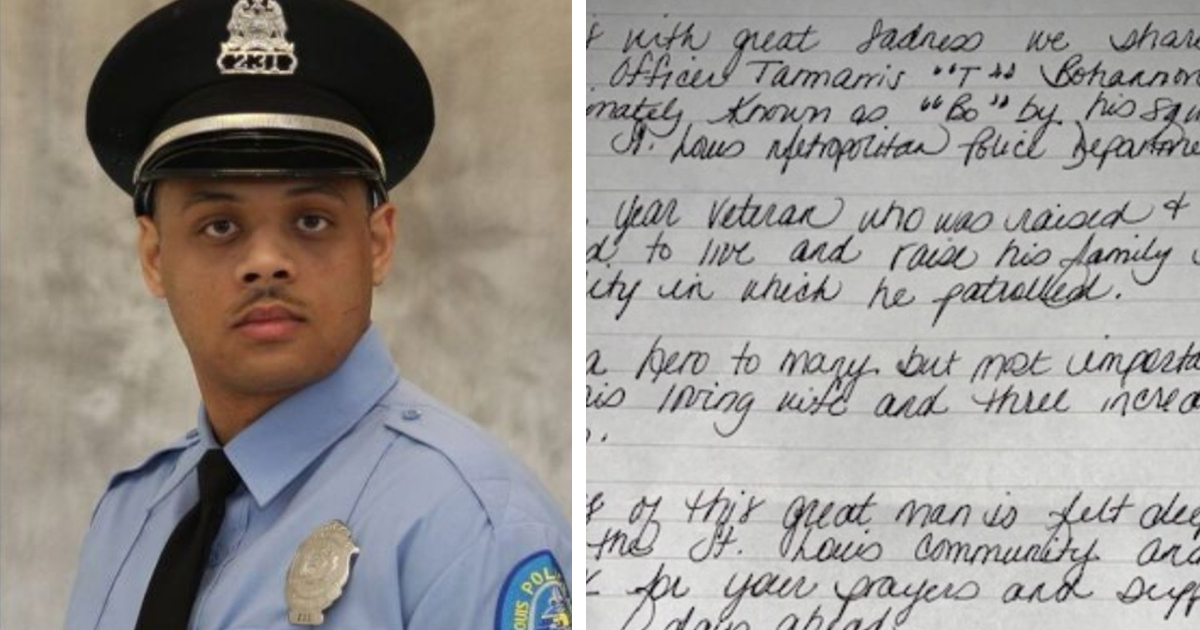 The St. Louis police officer who was shot in the head while responding to a barricade situation on Saturday has died of his injuries, according to authorities.

Tamarris L. Bohannon, 29, passed away on Sunday, leaving behind a wife and three children. A heartfelt letter describing him as a “hero” was written by his family and posted to Twitter by the police department.

Tamarris and another officer were shot responding to a shooting call in the Tower Grove South neighborhood in St. Louis at around 6 p.m. on Saturday.

The suspect barricaded himself inside a home and opened fire on the police, striking Tamarris in the head and the second officer in the leg.

The letter from his family reads that he was a “hero to many but most importantly to his loving wife and three incredible children.”

It continued: “The loss of this great man is felt deeply within the St. Louis community and we ask for your prayers and support in the days ahead.”

St. Louis Metropolitan Police Department Chief John Hayden said the incident was part of a “surge in violence” this summer. As per reports, eight of his officers have been shot in the line of duty since June 1.

Fox 13 say a 43-year-old suspect was taken into custody around 5:30 a.m. Sunday morning after a 12-hour standoff that saw him drive a family out of their home at gunpoint before barricading himself inside.

Tamarris and his colleague had been searching for another reported shooting victim when the gunman shot Tamarris in the head and the other officer in the leg.

Such a tragic story. Our brave officers should never lose their lives while simply trying to do their jobs, but such risks are what they openly face while attempting to keep us safe.

Share this article if you want to pay your respects to Tamarris Bohannon. Rest in peace!