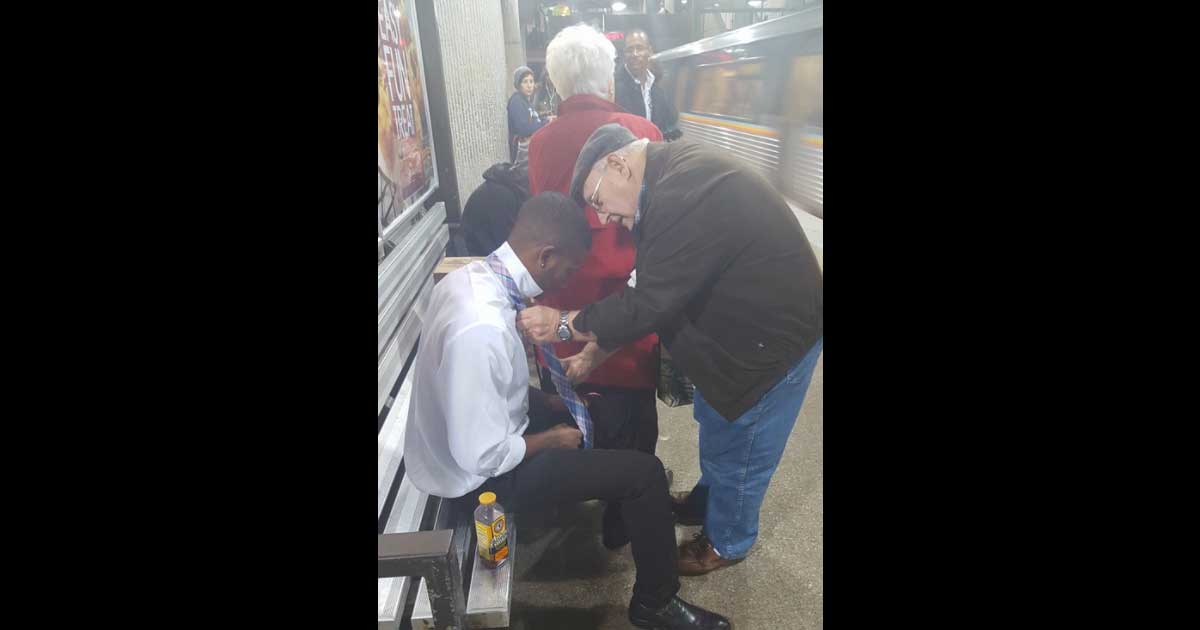 In today’s world of hustle and bustle in cities, it’s all too easy to get swept along with a tide of momentum and not stop to consider the things around you.

Perhaps nowhere is this more evident than in subways and underground systems, where people are often coming or going at as fast a pace as possible.

And yet in the midst of organized chaos there can so often be reminders of what good can come of slowing things down and looking out for your fellow man. That much is certainly in evidence when it comes to one story about a young man struggling to tie his tie during rush hour.

It was an elderly woman and her husband who spotted him and enquired as to whether or not he needed some help. Their interaction would later go viral …

It was a woman in a red coat who initially spotted the man in question having trouble.

He was sat down on a bench, trying and failing to secure his tie.

The woman approached him and asked: “Do you know how to tie it properly?”

When he answered, “No, ma’am,” she tapped her husband on his shoulder and asked if he could teach the young man how to do his tie properly.

A lesson for life

Without a hint of judgement or hesitation, he moved to help the young man, going through the process of tying a tie slowly and carefully.

One bystander was able to capture the special moment on camera, and also made sure to relay what the old man did next.

Instead of simply doing the tie and rushing on his way, the older man gave a step-by-step tutorial on how the process worked, before then making sure the youngster had learned what to do in the future by asking him to recount them.

It may have been a small gesture, but it taught the young man two lessons. Firstly, how to tie a tie, which is always a useful skill to have, but secondly – and perhaps more importantly – that stopping to help someone in need is still a priceless quality to have.

Just think, that young man might go on to repay the gesture in years to come, and it’s such an ever-repeating world of happiness and giving that we should all be aiming to live in.

I don’t know about you, but this story simply warmed me inside!

Please share this story if you think the elderly couple deserve praise for teaching this boy a lesson he can keep with him for the rest of his life.