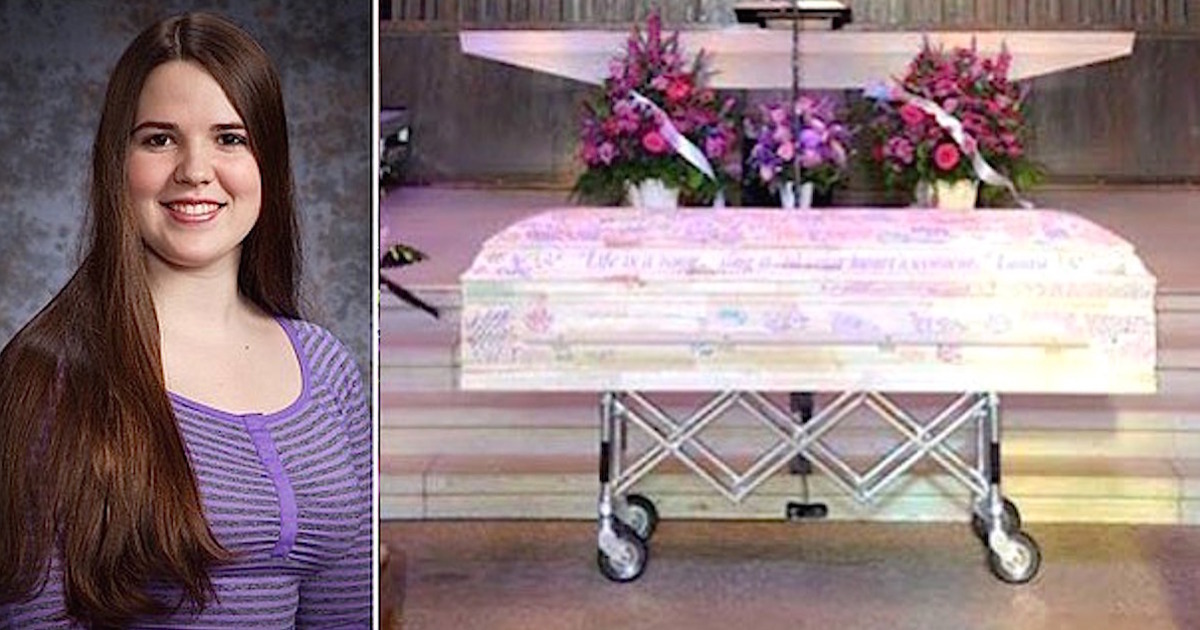 When Laura Hillier was just 13 years old, she was diagnosed with leukemia. Four years later, doctors announced that she was cancer-free, but unfortunately, her disease returned.

Laura, who was a talented and popular student at Nelson High School in Ontario, Canada, died on January 20, 2016.

Later that day, her family was forced to send out the tragic news on Laura’s Facebook page, where they had previously reported on her fight against leukemia.

“She fought bravely and all of you would have been so proud of her. Her poise, her courage, her strength and her pure spirit shone through right until the end,” the family wrote.

In homage to Laura’s courageous struggle, her classmates and teachers did something special at the funeral, or more specifically, on Laura’s casket.

At the end of January 2016, Laura Hillier passed away. She died at 18 years old from acute myeloid leukemia, while waiting for a transplant.

Laura died quietly, surrounded by loved ones in a hospital in Canada.

When Laura was 13, she was told that she had leukemia. Then after almost four years of treatment, she received joyous newsh—her cancer was gone.

Laura, who went to Nelson High School in Ontario, was known at the school for her love of music and theater.

Laura’s classmates and family members brought the tradition of writing notes in high school yearbooks to Laura’s funeral so they could give her a proper love-filled farewell.

In homage to Laura’s life, her family, friends, neighbors, teachers, classmates, and hospital staff all wrote her greetings.

When they read the greetings, Laura’s family were overwhelmed by the outpouring of support.

“You were musical. You were artistic. You were understanding. You were my bestest friend.”

“Very brave and strong. You will always be a hero.”

Laura’s favorite color, purple, was on display during the funeral; the church was adorned with purple flowers and everyone present wore at least some purple somewhere on their clothes.

Although Laura was taken much too early from this earth, it’s heartwarming the outpouring of support she had from her community.

Please share Laura’s story to help pay tribute to this brave girl and to show that we will never stop fighting to stop this horrible illness.