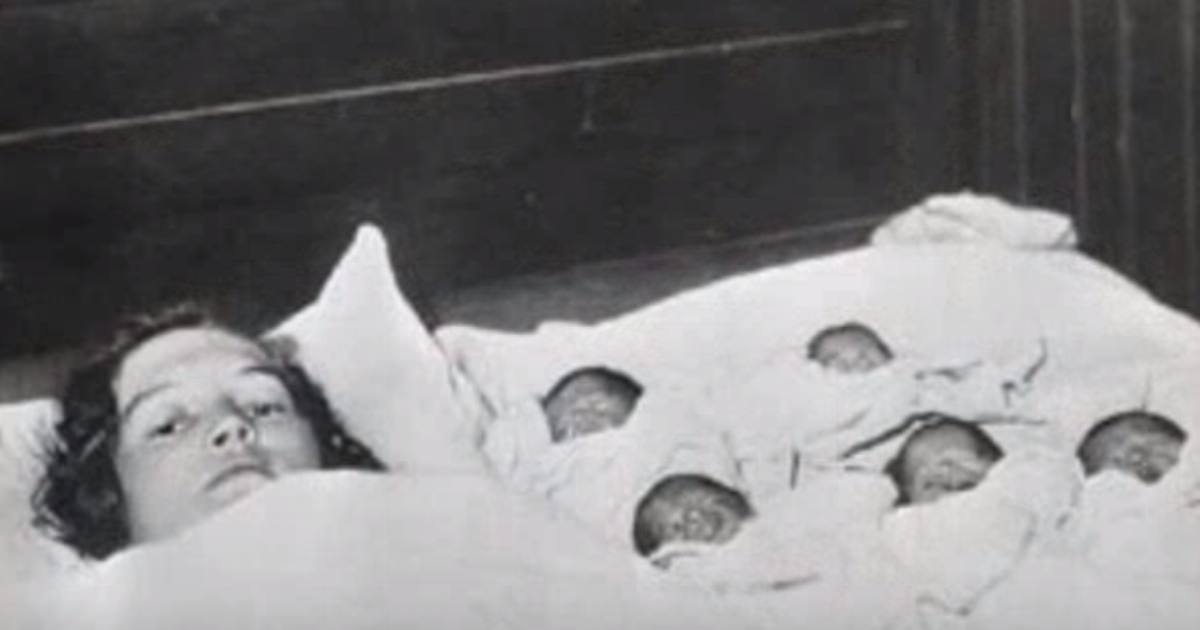 Having twins or triplets is always special, but giving birth to quintuplets is almost unimaginable.

Even today, multiple pregnancies are still linked to risks, let alone let in the 1930s.

So when a woman gave birth to five identical girls 83 years ago in Canada, nobody expected them to survive.

But the moment the Dionne quints came into the world, the girls entered the history books.

Sisters Yvonne, Annette, Cecile, Emilie, and Marie were born at home in Ontario, Canada on May 28, 1934.

Their parents, Oliva-Edouard and Elzire Dionne, were poor farmers and their home didn’t have running water and electricity.

A doctor named Allan Roy Dafoe delivered the quintuplets with the help of two midwives.

Doctor Dafoe thought he’d be delivering twins, but the Dionne quints would turn out to be a record-breaking birth.

The girls were the only quintuplets known to be born from a single egg and they were the first set of quintuplets to ever survive their infancy, let alone to adulthood.

Within days, the quints became world famous. Congratulations and gifts poured in, but so did offers.

Organizers from an exhibition called Chicago’s Century of Progress approached the girls’ parents and asked if they could display the quints there.

The girls’ parents, who were in dire need of money, agreed.

The government of Ontario wasn’t pleased with this decision, though, and intervened. It declared the Dionnes unsuitable to care for their five girls and took the children away from them.

Interestingly, however, the Dionnes were allowed to keep their five other children.

In the end, the doctor who delivered the quints, Allan Roy Dafoe, became the girls’ guardian.

Exploitation of the girls continued, however, with the support of the government.

In response to public interest, the Dafoe Hospital and Nursery was built across the street from the Dionne family home.

Every day, 6,000 visitors watched as the girls were paraded in front of them in an observatory gallery.

The quints’ parents ran a souvenir from their home, though they only occasionally had contact with their daughters.

An industry grew up around the Dionne sisters and the area became known as “Quintland.”

It generated millions of dollars at a time where most of the world was deep in the Great Depression.

The Dionne quints were the largest tourist attraction in Ontario, beating out the Canadian side of Niagara Falls. It’s unclear wherther any of this was in the best interests of Yvonne, Annette, Cecile, Emilie, and Marie.

Images of the quints were used to advertise Karo corn syrup and Quaker Oats, the girls starred in three Hollywood movies and were featured in several documentaries.

In 1943, after a long legal battle, custody of the quintuplets was returned to their parents.

But even though the girls had moved back to home, their lives were hardly better.

By then, the girls had nine other biological siblings: three older brothers, three older sisters, and three younger brothers — and their siblings were quite jealous of them.

Many years later, in 1995, the three quintuplets who were still alive at that time alleged that their father had sexually abused them while they were teenagers.

So at the age of 19, Yvonne, Annette, Cecile, Emilie and Marie decided to break off all contact with their parents.

Though the Dionne quints tried to live normal lives after their exploitative and abusive childhood, they suffered mental and personal problems throughout their lives.

In 1997, the three surviving sisters sued the Ontario government for exploiting them as children.

They settled the case for $2.8 million and the government acknowledged the mistakes it had made.

Today, Annette and Cecile are the only two surviving sisters.

Learn more about the fascinating, frightening, and incredible life of the Dionne quints in this video:

Just because these girls were so special, they were made to suffer their whole lives.

Today, it’s difficult to imagine all the attention and abuse that they were exposed to — especially with the government’s involvement.

Hopefully, however, their story has taught the world a lesson — that all children should be respected and that the best interests of the children should always come first.

Please share this article if you want to make sure that the Dionne quints are never forgotten!